Navigating by the Stars - by Ann Swinfen

The American Navy is stepping back in time. The US Naval Academy in , is to reintroduce training in celestial navigation, abandoned in the 1990s in favour of the exclusive use of computerised and satellite navigation systems. Now the threat of cyber attacks by the country’s enemies has led to a reassessment. In future, American naval officers will have an attack-proof backup system – navigating by the stars.
It is impossible to know how long ago mankind began to use the stars for navigation. It seems likely that as early hunter-gather tribes moved over the land they would have found their way to the most promising territories by using the ever-present map of the fixed and moving stars above their heads. Once they ventured out to sea, the knowledge of the stars would have been even more vital when there were no mountains, rivers or forests to serve as landmarks.

At what point this knowledge began to be codified and analysed using sophisticated mathematics is equally unknowable, but it was very, very early. Why can we be sure of this? Because of the extraordinary discovery of the Antikythera Mechanism found on a Roman shipwreck as long ago as 1901.
This amazing object was originally believed to be about 2,000 years old, contemporary with the ship on which in was found. However, in recent years it has been the subject of comprehensive research, revealing details which indicate a date of about 200 years earlier, around the time of Archimedes and Hipparchus.
That is not to say that either of them invented the Antikythera Mechanism, but it is an indication of the complexity of the astronomical and mathematical knowledge current at the time, which could not only determine locations for navigation but predict celestial events such as eclipses.
The Antikythera Mechanism is so complex that the researchers have not yet been able to create an exact physical replica, although they have generated computer images of the mechanism. One of the problems in producing a physical object is the very precise cutting of the cogwheels, something which must originally have been done by hand, yet it is proving difficult to reproduce with today’s apparently much more advanced machine tools.

The Antikythera Mechanism may have been unique, which was why it was still in use 200 years after it was made, or it may simply have been a unique survival. However, owing to its complexity, it must have been a rare, expensive and precious object. Another device, less complex, was in use amongst the Arab nations at least from the eighth century, the astrolabe. Even earlier than the Arab astrolabes, Byzantine texts indicate that a similar device, made of brass, was known in eastern Christendom.
Astrolabes, made both of wood and of brass, were in constant use throughout the Middle Ages and up to the late Renaissance. As early as the tenth century, astrolabes were being employed for a vast number of calculations – predicting and locating the positions of the stars, the sun and moon, and the planets, working out exact time, assisting in surveying and construction, and preparing horoscopes. One Arab writer described over a thousand uses of the astrolabe. It was, in effect, a computer.
This versatile instrument reached the West via Arab Spain, and was known in northern Europe, in , by around 1100 AD. Its manifold uses were immediately recognised and it became as popular in the West as in the eastern Mediterranean world. So important did Chaucer feel the astrolabe to be that he wrote a manual on its uses for his nine-year-old son in the fourteenth century.

In the following century, astrolabes were on sale in alongside the popular pocket sundials (which were somewhat easier to use!).
Anyone who has seen an astronomical clock, such as the famous one in , will recognise the influence of the astrolabe. These clocks display the movement of the zodiac and other major astronomical phenomena without the need to study the complex workings of the astrolabe. 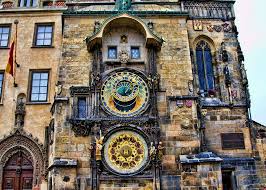 Clearly an astrolabe would be a vital instrument for any mariner far out to sea, needing to calculate his position. However, the large, heavy brass astrolabes were awkward to use on a pitching deck in a Force 10 gale. Mariners did not require all the manifold uses of the full astrolabe, which led to the development of the mariner’s astrolabe, a much simpler instrument.
The principal use of the mariner’s astrolabe is to determine the ship’s latitude by measuring the vertical angle of the sun’s height at noon. It can also be used to measure the vertical height of a star, if its declination is known. By taking such a measurement, the mariner could fix the ship’s position north or south of the equator, and thus its latitude. The problem of determining longitude was much more difficult and was not solved until the eighteenth century, by John Harrison in 1773 with the use of his very precise chronometer.

The earliest date for the mariner’s astrolabe is uncertain. The end of the thirteenth century has been suggested, but it was certainly known by the end of the fifteenth century, many improvements having been made during the golden age of Portuguese navigation. These simpler astrolabes continued in use until the late seventeenth century, when they were being replaced by newer instruments. Since the mariner’s astrolabe required the user to sight a celestial object along a movable rod called an “alidade”, any sailor who valued his eyesight would not look directly at the sun. Instead the alidade would be moved along the scale in the body of the astrolabe until the sun shone through it on to another surface and the angle could be read off the vertical plane of the astrolabe. Sighting a star did not create a problem, and the user could look directly at it.
During the late seventeenth and early eighteenth centuries, experiments were being made with so-called “reflecting” instruments, which used mirrors to allow the user to view two images at once. The experiments were driven by the growing need to determine longitude as well as latitude, and many distinguished scientists contributed to their development, including Hooke and .
These reflecting instruments took many forms – the quadrant, the octant, and finally the sextant, which was found to give the most accurate readings. One great advantage over the mariner’s astrolabe was that they did not need to be held steady, an almost impossible task at sea.

By the mid eighteenth century, sextants with an arc of 120° were in general use, and no doubt it will be modern versions of these sextants that the young officers at the US Naval Academy will be learning to use, along with all the complex theory of celestial navigation.

There is a personal postscript to this story. As my character Christoval Alvarez is currently engaged on a Voyage to Muscovy, I wanted to become more familiar with the astrolabe. Earlier this month I had a birthday, and my husband gave me this beautiful astrolabe, an exact replica of one made in 1602, on display in the of in . Now all I have to do is to learn how to use it. 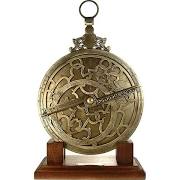 What a wonderful present, Ann, so original. I loved this post and will be fascinated to hear updates on how you proceed with your use of the astrolabe. Thank you for this.

Thank you, Carol! The astrolabe is gorgeous and weighs a ton - you can see why mariners needed something lighter. I need a proper handbook, though if Chaucer's son could master it at 9, surely I can manage. I used to live near the US Naval Academy and belonged to a children's sailing club. When I was 12, I took the midshipmen's course in celestial navigation and gained my certificate, but, alas!, I have forgotten every single bit of it now. I think the existence of the Antikythera Mechanism is absolutely mind-blowing.

I'd never heard of the Antikythera Mechanism - how fascinating! I haven't a clue how they work, but astrolabes and old clocks are such beautiful objects.

Fascinating post! Like Sue, I still don't have much of a clue as to how these things work but they are wonderful objects.

Hope you do manage to work it out - I've always wanted to know too. And was very interested as have been looking recently at Polynesian navigational techniques - stars and all sorts but no astrolabes - also extraordinary! Thank you so much.

I'm so glad other people have found this as fascinating as I have. I can see that I'll need to report back if and when I manage to learn to use it. Don't hold your breath!

Marvelous article with such stimulating images. Hard to believe all our engineers and scientists can't recreate such an ancient device. Hope you learn to use your new present. It is beautiful to look at, even if you don't.

I'll try hard, Janet, though I don't expect to learn all of the 1,000 uses! Yes, it is beautiful. The problem with engineering a replica of the Antikythera Mechanism has to do with the strange number of teeth needed on the cogs. I believe one requires 223, or some such number, impossible for the simplistic operations of modern machine tools. BUT...how on earth did they do it by eye, more than 2,000 years ago??