A Great Olympian by Katherine Webb

I hope you'll forgive a somewhat truncated post from me this month - it is holiday season, and by the time this goes live I shall be sunning myself (and reading voraciously) on a beach many miles away - hurrah! The only thing bothering me slightly about this holiday is that its dates coincide exactly with the Olympics in Rio.

I love the Olympics. It's the only sporting event I watch even more assiduously than I watch Wimbledon fortnight, and that's normally not a problem - the British weather being what it is, I don't generally feel bad for skulking around the TV instead of being out in the world. I can't do that on holiday, though... Well, maybe just the highlights show. So my blog this month is the review - or rather, the recommendation - of a book about a truly remarkable Olympian, Louis Zamperini.


Laura Hillenbrand's 2014 book, Unbroken, tells the life story of this remarkable man, born to Italian parents in the USA in 1917, and a resident of California. From a childhood on the wrong side of the tracks, Louis became a college track superstar, setting a new intercollegiate record for the mile at a smidgen over 4 minutes 21 seconds. He qualified to represent the USA in the 5000m at the 1936 Olympics, and though he didn't finish in the medals, his final lap was so fast - just 56 seconds - that the Führer asked to meet him, and so Louis Zamperini met Adolf Hitler in person.

World War II broke out, and in 1941 Zamperini joined the US Army Air Corps. In 1943, he was on a B24 bomber called The Green Hornet, and known to be faulty, when it crashed into the Pacific Ocean some 850 miles south of Hawaii. Louis and two other crew members left alive after the crash managed to survive 47 days adrift at sea in an inflatable life raft, only to arrive at the Marshall Islands and be taken into captivity by Japanese soldiers, where they would remain until the end of the war. Zamperini's account of the treatment he and other POWs received at the hands of the Japanese guards, and in particular a man called Mutsuhiro Watanabe, is painful but important reading.


Laura Hillenbrand, who also wrote the bestseller Seabiscuit, has turned this man's incredible life into an accessible, compulsively readable story of survival and triumph against all odds. I read it in conjunction with Richard Flanagan's Booker-winning novel The Narrow Road to the Deep North, about the plight of POWS forced by the Japanese to build a railway across Burma during WWII - commonly known as the Death Railway. Both books are shocking, compelling, and heart-breaking; beautifully written in their very different ways, and give a valuable insight into the depth to which war can plunge men. But in this Olympic month, it's Louis Zamperini, who died in 2014 at the age of 97, who gets my loudest cheer. 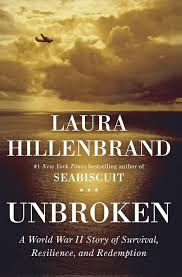 Good looking, too! Sounds fascinating. Loved Seabiscuit. Thanks for telling us about this, Katherine.