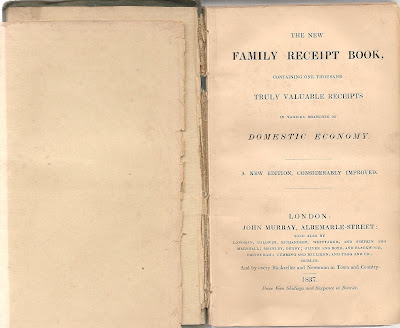 This book has been in our family for a very long time; I remember opening it as a teenager and laughing over some of the contents with my mother, in whose bookcases I recently rediscovered it.  Published in this ‘improved’ edition in 1837, it is a compendium of all sorts of useful information and tips for every imaginable kind of domestic circumstance or emergency.  Do you wish to ‘increase the durability of tiles’? Prevent fishing lines from rotting?  Purify wool infested with insects?  Do you wish to ‘write both blue and red letters at once with the same ink and pen and upon the same paper’?  Do you wish to cure boils, burns, nosebleed, the hiccough, gout, gravel or jaundice?  How about advice on how to prevent accidents from leaving a poker in the fire (weld a small iron crosspiece to the end of the poker, so that it will catch on the fender, should it slip out) – or on how to ‘make Transparent Screens for the Exhibition of the Phantasmagoria’?

Our ancestors lived dangerously, it seems. In 1837, Charlotte Bronte was nineteen. Much wonder has been expressed that she and her sisters in their quiet, remote parsonage, should have been able to construct such passionate and dramatic imaginative worlds.  All right: but this little book, if they had possessed it, would have encouraged them to attempt amusements such as these:

Take separately three parts of good dry saltpetre, two parts of dry salt of tartar and pound them well together in a mortar; then add thereto one part, or rather more, of flower of brimstone ... put this composition into a bottle with a glass stopper, for use.

Put about two drachms of this mixture in an iron spoon, over a moderate fire, but not in the flame; in a short time it will melt and go off with an explosion like thunder or a loaded cannon.

Such fun!  Or Charlotte, Emily and Anne could have written their books with:

Is a small bit of phosphorus, put into a quill, and kept in a phial, in water; when you write, dip your pencil often in the water, to prevent its taking fire.

It was possible also to make your own matches by ‘mixing one part of flower of sulphur with eight of phosphorus’: the author warns however:

This requires caution, and should afterwards be handled with great care, lest any part of the mixture get under the finger nails, a small portion of which might occasion great inconvenience. When used to procure a light, a very minute quantity is taken out of the bottle on the point of a match, and rubbed upon cork or wood, which produces an immediate flame.

A 'small portion of which might occasion great inconvenience' sounds a suspicious understatement to me. 'Hurts like h-ll', more probably...  Conditions in homes may be guessed at by entries such as these: “A mouse trap, by which forty or fifty mice may be caught in a night’ (a see-saw placed at the edge of the dresser, baited with butter and oatmeal, which tips them into a bucket full of water where they drown). A receipt ‘To destroy Bugs’ is also illuminating:

The risk of bugs in a big city is inevitable; the clothes-boxes of servants, the going to a public place of in a public carriage, or the insect being blown against the apparel while walking the streets, may introduce it into the house. But to cleanly people, whose beds are examined, and the joints oiled with pure sweet oil three or four times a year, they cannot become troublesome; except what no person can guard against ... a filthy, though perhaps very fine predecessor, who has permitted the animal to entrench itself in the walls and the ceiling.

The only solution then is to seal up the fireplace, windows and doors, and fumigate the rooms with ‘vitriolic acid gas’...

Do you wish to make artificial Asses’ Milk?  Then take:

Two ounces of pearl barley, two ounces of hartshorn shavings, three ounces of Eringo root candied, nine garden snails; boil these in six quarts of spring water till it comes to three; put two spoonsful of cow’s milk into half a pint of the above, and drink it lukewarm about half an hour before you rise in the morning.

NB – You may leave out the snails if you do not like them, but it is best to use them.

Were you, like me, hoping all through this recipe that the Artificial Asses’ Milk was going to be used as a toilet water, rather than as something to drink?  I love the footnote.

‘For improving coffee’ – ‘To discover vitriol in Beer’ – ‘To discover if bread is adulterated with alum’ – ‘To cure smoky chimneys’ – ‘To preserve meat by treacle’ – this enchanting book goes on and on. I shall share some more with you another time, but will leave you for the moment with this:

The custom of pouring brandy into the boots or shoes, when the feet have got wet, with a view to prevent the effects of cold, is a practice which (though very common) is founded in prejudice and misconception, and often proves fatal, by bringing on an inflammation and consequent obstruction of the bowels.

Good heavens, how have we managed without this essential guide to life?

I love this too. I have shovel fulls of snails in my garden, but where do you find harts horn these days?

Well, brandy warms you up if you drink it, so you pour it into your shoes to warm your feet up... Obvious! Is this sympathetic magic, or do you then put the shoes back on?