The Lynx of Happiness by Karen Maitland 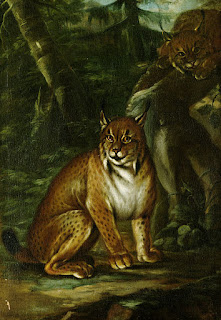 As you may have read in the papers, we had some excitement in Devon recently when Flaviu the lynx, newly arrived at Dartmoor Zoo, escaped and ran wild for a few weeks. Farmers with lambs and householders with small pets were naturally anxious, but many people were quietly hoping lonely little Flaviu would stay free and even find a mate among the other big cats rumoured to live wild on Dartmoor.

In the Middle Ages, lynx were known as lincis, and thought to be akin to a wolf. The name comes from leuk meaning light, and it possible that the lynx was named for its eyes which, like most night-hunters, shine if caught by a light in the dark. Lynx eyes were thought to have magical powers. They could see through solid objects and deep into the earth to discover whatever might be hidden down there. They were also supposed to be to discover hidden truths and see into the future. Perhaps that’s why they unnerved man so much. 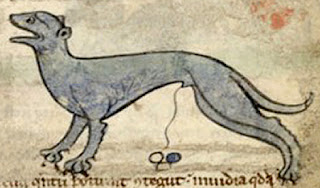 Legend had it that when they urinated, the liquid hardened into a precious stone after seven days, called Ligurius or lungurium, resembling a carbuncle gem. The lynx was said to hate people and having a ‘constitutional meanness’ would bury their urine as deep as they could, to stop humans taking the stone and using it a jewellery.

If the lynx hated people it was probably with good reason. for medieval farmers killed it whenever they could. The French called the lynx loup cervier, usually translated as deer-wolf, or chat loup meaning cat-wolf. Along with the wild cat they were disliked by the hunter, because they would quickly take to the trees when pursued, depriving the huntsmen of the long chase with hounds that boars and deer provided. There was little sport to be found in a treed-cat that could only be brought down by the skill of the bowman.

But as for poor Flaviu, he has been recaptured and was apparently most annoyed about it. They are currently trying to find him a mate, so let’s hope he soon finds happiness.

And talking of happiness, did you know that today (8th August) is apparently Happiness Happens Day. It was instituted in 1999 by the little known Secret Society of Happy People who aim is to spread joy. Back in the Middle Ages, people certainly had occasions to be jolly – Christmas feasts, fairs, and what in Devon is known as ‘Crying the neck’ – an evening of drinking, feasting and dancing when the grain harvest was brought in. The neck was a specially bound sheaf of the best ears of wheat from the harvest which was honoured by being held in the centre of circle of farmhands, then lowered and raised three times, as those around bowed low and rose up with the neck.

But what you could do if you were feeling a little blue the rest of the year, and with famine, pestilence, war there were certainly plenty of times when medieval folk needed cheering up. A 16th century proverb gave good advice –


He who would be happy for the day let him go to the barber; for a week, marry a wife; for a month, buy a new horse, for a year, build him a new house and for a lifetime, be an honest man.’

But if you couldn’t afford a new house, those suffering from melancholia were advised to drink decoctions of one of several herbs in strong wine – Melancholy Thistle, Viper’s Bugloss, Motherwort, Burnet, or Dodder which had climbed up a Thyme plant. These were said to make you as ‘merry as cricket’, but of course, that might have been due to the wine.

Curiously, one of the medieval symbols of happiness was the mandrake, a hallucinogenic plant used by sorcerers which was believed to spring up from the sperm of hanged men at the foot of the gallows. Its scream, when dragged from the earth, was said to kill or drive men mad. So dogs were often tied to the plant and then thrown some meat, so they would run after it and tear the plant up.

Why would such a wicked little plant be the symbol of happiness? The reason is that if you could get hold of a genuine one it could bring you boundless wealth and grant you all your heart desired. And in a way it did for some people. Medieval forgers made a good living faking mandrakes out the bryony roots which they carved to look like manikins and buried in the ground with a few grains of wheat on top to resemble mandrake leaves and when the ‘leaves’ sprouted, they sold them for a fat purse to those who’d never seen the real thing.
But however you find your happiness today, don’t forget to pass it on – happiness is contagious.

I love every bit of this blog post, Karen! Thanks!!

Thank you for telling me how the melancholy thistle got its name! It's so interesting to see the remnants of the past conserved in language, like that. Very interesting to read about lynx, too. The fact that the escaped lynx killed a lamb (wasn't it?) demonstrates the problems conservationists face in reintroducing these beautiful animals (as also with wolves), that they come up against farmers, as you have shown they did in the past, and the legitimate concerns of farmers need to be addressed by conservationists (it does happen with wolf conservation bodies, who fund guard dogs and wolf deterrent measures). As a child, I was told about lynx by my mother and grandmother as an animal they were aware of in the forests in my mother's childhood. I was wondering whether that was in Silesia (now Poland) or Graz, which is close to Slovenia, where I believe lynx are still found. It fascinated me, because the animal seemed so exotic to me, so un-European, somehow. Even odder to think of them living in Britain. Lovely photo of the bugloss - I do love that plant.