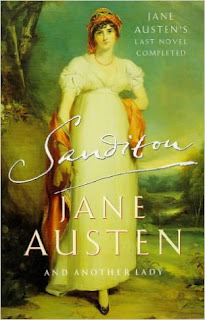 Sanditon anyone?  I am not an Austenophile but this summer I read the unfinished novel begun by Jane Austen just before her death in 1817.

Sanditon is Austen's usual - if a little darker - confection of hearts broken and pomposity skewered. Of dangerous men and young women who would like to hope for something more out of life than a decent match.

But it's also about property speculation - one character is staking his family's fortune on building Sanditon into a select seaside resort - and the craze for the health reviving salt sea and air.

This isn't a review. The novel stops abruptly at Chapter 12, and there's a definite first draft feel to it. I am not sure if Jane Austen would have liked her work to go out into the world unfinished.

But what recommends it to me, apart from Jane Austen's first mixed race character heiress Miss Lambe from Antigua a 'half mulatto', is the setting.

It's set in a fictional seaside village on the south coast 'between Hastings and Eastbourne', and since Bexhill is a late nineteenth century town, that rather pointed me towards St Leonards on Sea, the lovelier, grander, sister to my current hometown, Hastings.
St Leonards on Sea was a brand new town built and designed by super star London architect and planners James Burton and his son prodigiously talented son Decimus. Fresh from building Nash's lovely terraces around Regents Park and designing large swathes of Bloomsbury James Burton purchased a parcel of land with the intention of developing an elite seaside resort. One with upmarket terraces, a hotel and assembly rooms, picturesque gardens, and some suitably romantic cliffs, catering for a very select clientele.
I googled and found  'Jane Austen's Worthing: The Real Sanditon' by Antony Edmonds, I haven't read it yet, and anyway Sanditon was a complete new town, a blank canvas so it couldn't be Worthing. But of course the one glaring flaw in my thesis is that work did not begin on St Leonards until 1826 almost ten years after Jane Austen's death. But it's not inconceivable that the plans were widely known is it?  Of course it doesn't matter a jot. But it does help, walking about the streets today, thinking about the sort of things the town has seen. And there's an awful lot of James and Decimus Burton's original town that remains.

Truth is always very very slippery. I think this is mine.

Posted by Catherine Johnson at 06:54

The inclusion of the mulatto heiress is fascinating, by comparison with the mulatto young woman Miss Schwartz in Vanity Fair, who's described in the most racist terms, totally absent in Sanditon. Such a shame she never lived to complete it! Fascinating to speculate where the town might actually have been!

Yes, I was reminded of "honest Miss Swartz", who is not quite the grotesque John Sutherland makes out: http://blog.oup.com/2011/07/thackeray/ She is warm-hearted and loves Amelia, and anyone Thackeray calls "honest" is a good egg. But that account of the racism in his later books - guilty as charged! Wish Austen had finished Sanditon.