The man who painted women in gold

This will be the last of the posts I've written as a result of visiting Vienna in June. We visited several museums and art galleries while we were there, and in every one, there were pictures by Gustav Klimt.

His paintings are famous, particularly his portraits of women, and they're very distinctive. The women are mostly dark-haired with skin like porcelain, and the pictures are usually intricately decorated, often with gold, but also with bronze, platinum and silver. (No wonder that, although they commanded high prices, he didn't save much money - though there were other reasons for that too, as we shall see...) For instance, there's this one of Adele Bloch Bauer, which was the the subject of The Woman in Gold, a recent film starring Helen Mirren. 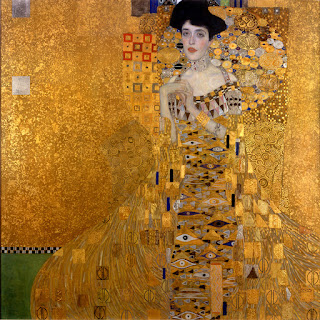 I bought a book about Klimt from the Belvedere gallery, and before re-reading it in order to write this piece, I sat and looked at his photo on the cover, and jotted down my impressions of the man. 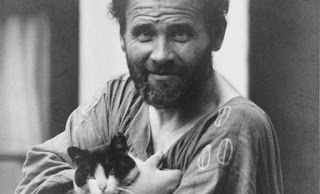 He has warmth, humour, charm. As he looks out at you, he invites you to join in and enjoy life with him. He has dark blue eyes (though they are described by a contemporary as grey - I puzzled over this, till I realised that this photo, from 1911, must originally have been in black and white, and been tinted since), curly brown hair and a beard, and is wearing a blue caftan - an unconventional garment for the early 20th century. He's holding a cat, which suggests he's tactile. He would give big bear-hugs, this man. And his gaze is very direct - his attention would be fixed on whoever he was with; you would feel he was interested in you, that he's waiting to hear what you have to say.

And his charm certainly worked on a great many women. A particularly complicated year was 1899, when he had two sons by different women almost at the same time - while also entering into an affair with his sister-in-law Helene, the widow of his brother Ernst. You wonder really how he found time to paint. Not surprisingly, he found it all a bit much - he wrote to one of the mothers, Marie Zimmermann '... the misery is accompanied by the guilt...I am more desperate than anybody could ever know.' But, he assured her: 'In one direction at least I will keep you carefree, and take care of your future...'

He had to take care of the futures of several other children too - so it was a good job he was so successful as an artist. His sense of guilt certainly didn't keep him on the straight and narrow - there was Maria, there was Camilla, there was very nearly Alma, there were probably Sonja and Adele - and heaven knows how many others.

But there was one woman who was a constant - one who 'loved the pilgrim soul in him', to paraphrase Yeats. This was Emilie Floege, the sister of his brother's widow (keeping up?) the woman he fled to after everything got so frenetic in 1899. They never lived together, but they were close friends and lovers, and remained so till Klimt's death. She was an independent woman, a fashion designer - and she didn't design conventional clothes, but clothes which would set woman free: clothes that were loose and comfortable, not restrictive and tight. She was certainly beautiful. Here is one of Klimt's portraits of her. (I LOVE her dress. Those colours!)

But she wasn't just beautiful. I don't know much about her - I'd like to find out more - but it's easy to see from photographs that she had an impish sense of fun, and that like Klimt, she knew how to enjoy life. The two of them together look absolutely like partners in crime - she's smiling in every picture I've seen. Here, for instance: 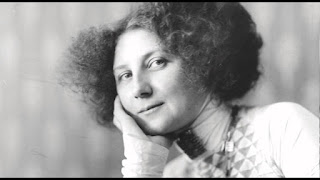 And here the two of them are messing about on Lake Attersee, where they spent almost every summer together: 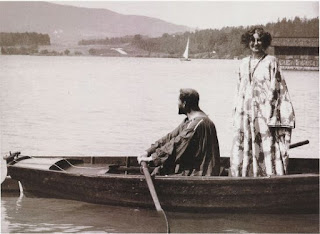 And here, I'm sure they're on the verge of giggling irrepressibly: 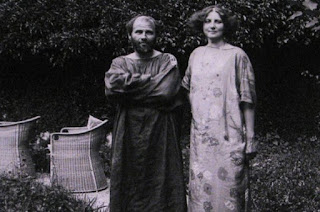 When he was stricken with the stroke that killed him, on 11 January 1918, it was Emilie he called for: 'Tell Emilie to come.' And of course, she came.

If he hadn't been the artist he was, what would we say about him - a man who is said to have fathered up to fourteen children, without marrying any of the mothers? I don't know. But the impression I get from what I've read is that he not only loved, but he was very much loved. I'd like to find out more about him, too.

He was generous in his support of other artists. He was a father figure to Egon Schiele, whom I wrote about last month, and played a significant part in furthering the younger man's career. Egon - who sadly died later that same year, of Spanish flu - wrote in his obituary of his friend: 'Gustav Klimt. An artist of unbelievable accomplishment. A person of rare depth. His oeuvre a shrine.'

And finally - he didn't only paint portraits. Particularly during those summers at Lake Attersee, he painted the most beautiful landscapes, using a card with a square viewfinder to select a view apparently at random. Here's one, but there are so many more: the birch trees are as slender and graceful as the women. 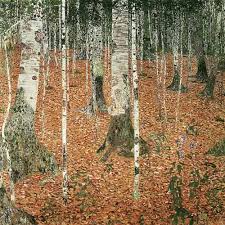 NB All quotes are from Gustav Klimt: Life and Work, published by Jovis Books for the Belvedere, and written by Stefanie Penck and Alfred Weidinger.

I knew of Klimt''s paintings and have a copy of those birch trees on my wall. I did enjoy your interpretation of his photograph and he certainly seems to have been kind and good fun.

(I rather wish the unromantic part of my mind hadn't started to worry about the feeding and care of all those children and, in that era, those many mothers.)

Thanks for this post, Sue - I haven't thought about Klimt since everyone had posters of The Kiss back in university. Way, WAY back. And those photos do speak volumes. (And he liked cats, after all.)

I visited Vienna many years back and fell in love with Klimt's paintings. You're right. Seeing them live if a completely different experience to watching his prints or a picture in a book. I didn't know much about him but yes, he sounds like good fun (and I'm also intrigued about Emilie). Thanks for this wonderful post (I'm a big fan of his landscapes too)

Yes, one has to see the paintings properly - that's the case with most paintings, though, I feel. I have seen his paintings in Vienna, and visited the Sezession, which is well worth seeing. I adore the over-the-topness of his work, and I do like the photos of him and Emilie frolicking in their robes!I didn't know about all the other women, though. I suppose it was par for the time.. Enjoyed this post hugely, Sue.

Oh, I love that woman in gold picture!

I love Klimt's paintings - especially that woman in blue - and thought he was completely original.
Then I was in a Scottish art gallery some years ago, with my partner - I think it was Glasgow - and saw a painting at a distance that was obviously Klimt. The style, the use of gold, the vivid colours. I said, "Oh, Klimt!" But I was puzzled because the painting was of Druids, which didn't seem Klimt's subject.
"No," Davy said. "It's by a Scot and it's earlier than Klimt. In fact, it was exhibited all round Germany just before Klimt started painting in that style."
Have a look here - https://en.wikipedia.org/wiki/Edward_Atkinson_Hornel

On line, though, the painting doesn't seem as rich and 'Klimt-ish' as it did in the gallery.

Joan, Olga, Lwslie. and Katherine - thanks for your comments! Sue - I think one or two of Hornel's paintings are similar, but overall, not so much; lots of curves, fewer upright lines, just - different. But the composition is sometimes similar. The colours, though - nowhere near!