I don’t even want to imagine a childhood without The Cat in the Hat or Yertle the Turtle. I can still recite the first ten pages of The Sleep Book and all of Green Eggs and Ham. As far as I’m concerned, the only person who ever beat Dr Seuss for perfect rhyme is the singer-songwriter Tom Lehrer. (The two of them were obvious soul-mates.)

Dr Seuss (Theodor Seuss Geisel) knew only one failure in his brilliant career as an illustrator/writer, and it was The Seven Lady Godivas.

I would never have known about this book if it hadn’t been discovered by my father, who brought me and my siblings up on a rich diet of Seuss and Lehrer. He drew my attention to The Seven Lady Godivas while I was writing my own book about seven long-haired sisters, The True & Splendid History of the Harristown Sisters, a historical novel published by Bloomsbury in 2014.

So I tracked down a copy of Seuss’s book, and found myself mightily surprised.

The Seven Lady Godivas, subtitled The True Facts Concerning History's Barest Family, was published in 1939, two years after his first book for children, And to Think That I Saw It on Mulberry Street.

Genre? Sort-of-historical-fan-fic-graphic-novel-gift-book-novelty-item. Like the books we all know and love, it featured Seuss’s unmistakable black-line cartoons with colour infils, and it was published in a children’s bookish format: eighty pages, hardcover, 8.5 x 11 inches.

But the protagonists are seven well-developed young women to whom that loathsome phrase ‘scantily clad’ can actually be applied. All they wear is their hair. Although all nipples and vaginas are artfully concealed, breasts and buttocks are not: the scantiness of the cladding serves only to emphasise the nudity underneath. The phallic symbolism is extremely ... well, intrusive. Visually, this book is not for children, many of whom, would be embarrassed by the illustrations, I suspect. Nor are there any of Seuss’s irresistible anapestic or trochaic tetrameter. It’s relentlessly prosy. 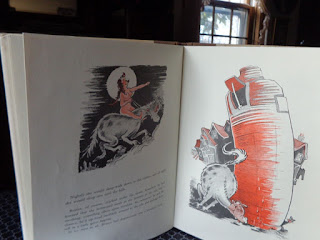 The Godivas, who live in the 11th century, are committed nudists, even when it snows, because ‘they were simply themselves and chose not to disguise it’. Their father, Lord Godiva, sets off for the Battle of Hastings on horseback but is thrown from the horse and dies. This sets an obstacle in the way of the sisters marrying their suitors, the seven Peeping brothers. Before she can settle down, each sister must undertake a quest for a scientific "horse truth" that will contribute something to the greater knowledge of mankind.

What do the Godivas discover?
Don’t look a gift horse in the mouth.
Don’t put the cart before the horse.
You can lead a horse to water, but you can’t make him drink.
Never change horses in the middle of the stream.
Horseshoes are lucky.
That something can be a horse of another colour.
Don’t lock the barn door after the horse has been stolen.

As a plot, it doesn’t make the heart race, or set the finger quivering with anticipation at the top of the next page, does it?

So what went wrong?

Little as one likes to think it, Dr Seuss did have an adult life. His Godivas were created at time when he was still pursuing his initial career as a writer, illustrator and cartoonist for various American magazines such as Vanity Fair. He also drew advertising illustrations for major American brands and would soon become active as a political cartoonist during World War II. 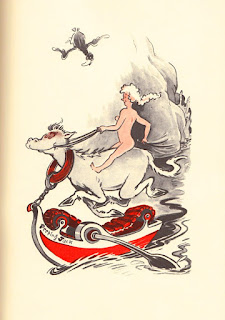 Appearing as it did, just before the war, the mixed messages and general frivolity of The Seven Lady Godivas met with little enthusiasm. There was no reprint after the first 10,000 copies. The sales were something between 50 and 2500 copies. The book was remaindered, making only one other appearance of which I know … a reprint in 1987, with a different jacket, to celebrate a retrospective exhibit of his work. I could not detect any mention of it in Random House’s Seussville site.


﻿﻿Dr Seuss himself knew that The Seven Lady Godivas was not his finest hour. He regarded it as his greatest failure as a writer and thought it should never have seen the light of day. He was frank in his embarrassment about it. He pilloried his over-indulgent publisher on the endpapers of the book: if you look in one of the upper branches of the tree in his illustration (below) you will see a small bucket of sap, which is labelled ‘Bennett Cerf’, the name of his publisher. (I know it's too tiny to see here). 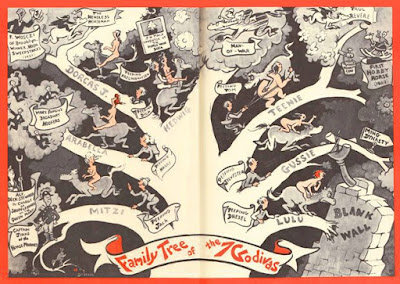 Nor was Seuss satisfied with the artwork he produced for the Godivas. When interviewed, he said of this book that ‘it was all full of naked women, and I can't draw convincing naked women. I put their knees in the wrong places.’

I'd say that was fair.

And it seems that we can be grateful to Godiva debacle, because it appears to have hustled Seuss away from any thoughts of writing for adults, advertising or any such grown-up pursuits, and back where he belonged: writing for children. He was frequently quoted as saying, ‘Adults are obsolete children, and the hell with them.’

(That didn’t mean that Seuss couldn’t write some of the most sophisticated tracts I know in defence of the environment or against racism – he just managed to do it in rhyme, with pictures, in The Lorax and The Sneetches.)

While researching this post, I came across one of those facts you think you should have known: how The Cat in the Hat came to be. Back in 1954, when American was in a junior literacy crisis, the then director of Houghton Mifflin’s education division compiled a list of 348 words that he considered crucial for first-graders to know. He commissioned Dr Seuss to trim that to 250 words and then to write a book using only them.

This brilliant writer achieved The Cat in the Hat with only 236.

For an amusing insight into his early career, including his contribution to wartime propaganda, see this You-tube video – which claims that Green Eggs and Ham arose from a bet with Mr Cerf that Seuss could not produce a book using just 50 words.

Email ThisBlogThis!Share to TwitterShare to FacebookShare to Pinterest
Labels: Dr Seuss, Lady Godiva, Michelle Lovric, The Cat in the Hat, The True & Splendid History of the Harristown Sisters

I can see why the idea really didn't work once it grew into full book & story form, but there's something rather glorious about those galloping sisters on the front cover. Thanks!

Michelle this is pure gold! The Cat in the Hat is one of my all-time fave books. Who knew Seuss had a go at historical fiction? And I love the facts at the end, too. P.S. Your dad was pure gold, too. x

An oddity indeed! Thanks for this, Michelle!