On December 31st 1724 Mr. William Sykes died in Bruges. He was a painter and picture dealer, a member of the Virtuosi of St Luke’s, an exclusive club of artistic connoisseurs, one of the close friends who received a mourning ring from Sir Godfrey Kneller and as you can see above 'a Gentleman distinguished and universally known for his extraordinary Performances and uncommon Judgement in that Art'.

He left his business at Two Golden Balls, Portugal Row, Lincoln’s Inn--Fields to his son, and the family continued in the art trade through the rest of the 18th century.

Google him now, however, and you’ll read that he was a forger.

I’m working on a novella in the Westerman and Crowther series that revolves around art fraud in the period, so I stumbled across Sykes in the early stages of my research. I then went down a rabbit hole of art history and am reporting from deep underground.

The internet articles about William Sykes seem to originate in Noah Charney’s book The Art of Forgery. Its a beautiful book, but I’m not convinced by his takedown of Sykes. It's made me realise how careful we need to be, or how careful I feel we should be, when accusing historical figures of crimes. I don't think Charney is careful enough, he's providing snappy prose rather than history in the pages which deal with Sykes and I think that's a shame, particularly because it makes me wary about the rest of the book.

No he didn’t. George Vertue did. According to A. C. Ducerel.

George Vertue (1684 -1756) was an artist and engraver who around 1713 embarked on a grand project to collect every scrap of information he could about the history of art in England. He died however before he could shape those notes into something fit to be printed. Horace Walpole, who had often corresponded with him, bought the manuscript notes and used them as the basis for his Anecdotes of Painting in England. In the first volume he wrote about a picture he owned at the time which was known as ‘The Marriage of Henry VII’. Now another of Walpole’s correspondents, A. C. Ducerel wrote to him (23/2/1762), and told him that Vertue had said:

'That Lord Pomfret bought this picture of one Old Sykes above 30 years ago, which Sykes dealt in pictures and was a noted tricker—that he (Sykes) gave it that name, well knowing how to give names to pictures to make them sell—that Geo. Vertue had carefully examined that picture ... and that, upon the whole, it was suspected, at the time that Lord Pomfret bought it, that Old Sykes, who was a rogue, had caused the figures and representation of the marriage, to be added to the representation of the inside of a church, Old Sykes having before been guilty of many pranks of that sort.'

So Walpole didn’t use that phrase ‘noted trickster’. It was Vertue who said it to Ducerel, who related it to Walpole who then flew off the handle. Of course he did, Vertue was impugning his picture, of which he was very proud, from beyond the grave. I seem to remember he paid £84 for it.

Now, in one of those gleams of serendipity which seem to come up when researching, it turns out that the picture which Walpole was defending is up for sale next week at Christie’s in New York, and certainly someone messed about with it. A lot. When Walpole owned it it looked like this: 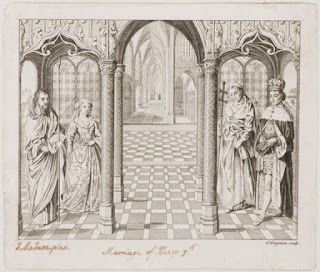 Well, that's an engraving of how it looked. After very careful restoration - it now looks like this:

The estimate is 3-5 million dollars, in case any of you fancy it.

So was this transformation William Sykes’s handiwork? I think there is no way of knowing. This detailed and scholarly article almost convinced me, but a portrait that the author, Alain.R.Truong identifies as by Sykes, and relies on for comparison is now listed on the National Trust site as by an unknown 19th century painter. I’ve emailed to ask about that and will let you know if I hear anything.

Charney’s accusation however in The Art of Forgery is not that Sykes repainted the painting above, but that Sykes forged an inscription on the back of a different painting. The painting, now known as The Enthronement of Saint Romold as Bishop of Dublin, was for a long time thought to be a Van Eyck portrayal of The Enthronement of Thomas a Becket. It did certainly pass through Sykes’s hands, but that doesn't prove the inscription is the work of Sykes.

Charney implies Sykes attributed the painting to van Eyck because he was ‘the most famous and highest selling artist in the late eighteenth and throughout the nineteenth centuries in England’, which, given Sykes died in 1724, would make him a prophet as well as a forger.

George Vertue gathered information from Sykes about painters the older man had known, so was willing to take his words on some things, but he’s very distrustful of him too. When Vertue decides that a portrait, traditionally called ‘Mary Queen of Scots with her son’, in The Drapers Hall in London is in fact no such thing he writes ‘I fancy Sykes the painter was concerned in it’. Hmm. Well. Assertion is not evidence.

I have noticed that though Vertue was an early student of Godfrey Kneller, he didn't get one of those mourning rings, and Sykes did. Jealousy, perhaps? That could make an interesting novel...