Just before Easter I spent two very enjoyable days in Lyme Regis, on the Jurassic Coast , a World Heritage Site that stretches from Exmouth to Studland Bay. The layers of sedimentary rock along that coast reveal the history of Earth across 185 million years of the Triassic, Jurassic and Cretaceous periods. The beaches around there are still crowded with fossil hunters particularly in ‘fossiling weather’ – when it is wet and stormy with a strong tide and a choppy sea. This section of the coast is one of the most active landslip sites in Europe and as the cliffs fall into the sea they reveal their secrets.

I became interested in Mary Anning, the self-educated fossil hunter and collector, and read Tracy Chevlier’s vividly imagined novel about her, Remarkable Creatures, as well as Shelley Emling’s biography, The Fossil Hunter. Anning was the daughter of a cabinetmaker and amateur fossil hunter in Lyme Regis and when she was a baby she survived being struck by lightning which, people said, accounted for her unusual mind. Her father died in debt in 1810 and a year later, when Mary was twelve, she and her older brother Joseph thought they had found the skull of a crocodile. Anning then spent a year extracting the rest of the fossil from the 205 million-year-old Blue Lias cliffs on the beach. She sold the six foot long skeleton to a private collector for £23. It was not a crocodile but an Ichthyosaurus, a “fish-lizard.”

Fossil collecting was dangerous because the cliffs could collapse at any moment and in one of these landslides Mary’s beloved dog, Tray, was killed. She taught herself an immense amount about fossils and found her first complete Plesiosaurus skeleton in 1823. She also found various Pterosaurs and a Squaloraja skeleton. 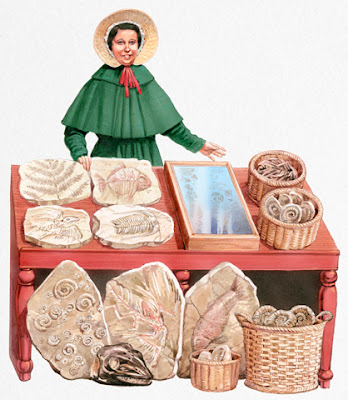 Here she is selling her fossils in Lyme Regis. Museums and collectors all over the world bought them and her knowledge was respected. She became friends with distinguished geologists, including Henry De la Beche, William Buckland,Richard Owen andAdam Sedgwick, one of Charles Darwin’s tutors. The famous French anatomist, Georges Cuvier, doubted the validity of the Plsiosaurus she
found, with a neck that contained 35 vertebrae, when he first examined a detailed drawing. Cuvier probably suspected it was a forgery but the geologist William Conybeare defended Anning’s find and Cuvier eventually wrote that her fossil was genuine, and a major discovery.

This amazing woman taught herself geology, paleontology, anatomy and scientific illustration. But because she was working class, and a woman, she was never completely accepted by the 19th century British scientific community and admiration was always tempered with condescension. In 1824 Lady Harriet Sivester, the widow of the former Recorder of the City of London, wrote in her diary after visiting Mary Anning:

". . . the extraordinary thing in this young woman is that she has made herself so thoroughly acquainted with the science that the moment she finds any bones she knows to what tribe they belong. She fixes the bones on a frame with cement and then makes drawings and has them engraved. . . It is certainly a wonderful instance of divine favour - that this poor, ignorant girl should be so blessed, for by reading and application she has arrived to that degree of knowledge as to be in the habit of writing and talking with professors and other clever men on the subject, and they all acknowledge that she understands more of the science than anyone else in this kingdom."

Mary never published a scientific paper of her own—men wrote up her finds. She wrote sadly, "The world has used me so unkindly, I fear it has made me suspicious of everyone." She never married, and was poor until a friend convinced the British Association for the Advancement of Science to provide her with an annuity of £25 per year shortly before she died of breast cancer. 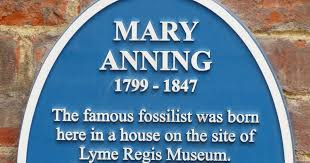 Although the Geological Society marked her death in a president’s address, they didn’t admit the first female member until 1904. In 1865 Charles Dickens, with his wonderful eye for snobbery, wrote an article about her, Mary Anning, The Fossil Finder:

“She met with little sympathy in her own town, and the highest tribute which that magniloquent guide-book, The Beauties of Lyme Regis, can offer her, is to assure us that "her death was, in a pecuniary point, a great loss to the place, as her presence attracted a large number of distinguished visitors." Quick returns are the thing at Lyme. We need not wonder that Miss Anning was chiefly valued as bait for tourists, when we find that the museum is now entirely broken up, and the
specimens returned to those who had lent them.”

Many of her finds will never be associated with her name because the records were lost long ago. Now, however, The Lyme Regis Museum stands on the site of the house where she was born and there is an annual Fossil Festival at Lyme Regis. The Geological Society has placed one of her ichthyosaur skulls and a portrait of her and her dog in their front reception hall and The Natural History Museum in London has made her and her finds the main attraction of their Fossil Marine Reptiles gallery. In 2010, a hundred and sixty-three years after her death, the Royal Society included Anning in a list of the ten British women who have most influenced the history of science.

Fossils, of course, played a vital role in the gradual birth of the earth sciences and in the investigation of such theories as continental drift, plate tectonics and evolution. Studying fossils helps palaeoclimatologists discover how life forms reacted to climate changes in the past so that we can begin to predict how the oceans might react to climate change today. Mary Anning’s discoveries were the beginning of a revolution in our knowledge of the history of life. Many of the early collectors were clergymen who were forced to question the Old Testament's account of creation a generation before Darwin’s theory of evolution. This is still relevant at a time when Donald Trump has just appointed the creationist, Jerry Falwell Jr, the president of Liberty, the largest Christian university in the world, Liberty, to lead his higher education reform taskforce. 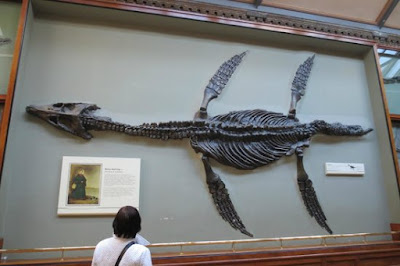 Good to read about Mary Anning again! Another woman whose scientific achievements are undervalued. And grim to read about another Trump anti-scientific attack. We were at the Natural History Museum with our granddaughter last Thursday, and many of the best fossils were her discoveries. Good to be able to tell Emily that a woman found them!

Yes, she was a real heroine, wasn't she? You can see why scientists felt they had to march last weekend - the march of progress, that the Victorians believed in so passionately, seems to be going backwards.

Mary Anning was truly a heroine! I won't write "unsung" as that is too dainty-sounding for the way she was treated. I am just reading The Essex Serpent, so this was a timely post. Thanks.

By the way, Joan Lennon chose Anning as the subject for her excellent short story in the "Daughters of Time" anthology, edited by Mary Hoffman.