Denying the doldrums through history, food, and favourite cookbooks - by Gillian Polack


I’m having a bad day. Not a day when big things go wrong and the world is a walking disaster. Just one of the those days that don’t feel quite right.

Normally, to fix bad days, I cook. I can’t do that today, because I’ve had a lot of bad days recently, and my refrigerator is full. If anyone wants mango pasta with berry sauce, or homemade bread or a number of other delectable foodstuffs, I’m your person. However, I still have a way out of the badness of the day. You’re going to help me: I’m going to introduce you two a couple of historical (food-related) books. It would cheer me up even more if we talked about historical food in the comments! 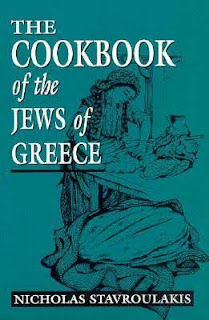 Nicholas Stavroulakis’ The Cookbook of the Jews of Greece is one of the best cookbooks I own. So many amazing recipes. So much history. What interests me today is the history, for the recipes are among those I cooked last week.

The Jews of Greece have a complex and fascinating past. Thre is not one simple Jewish culture or group in Greece, but several, so they don’t have just one cuisine. Stravroulakis gives us recipes from Jews who come from the Greece of Classical times, and from later Sephardi arrivals. Just the two. The Sephardi dishes aren’t the same (although there are overlaps) as Sephardi dishes from elsewhere. And the Romaniot (the ancient Jews of Greec) are purely Greek in their cooking, but Jewish. Some of the names of recipes are in Ladino (a cousin of Spanish) and others are in in Greek. And they’re all related to the Jewish dishes I have from my very different set of backgrounds.

Every now and again I open the book at random and cook from it, because cooking from it gives me more of the history and reminds me of the people. Each dish contains history.

I was going to talk about one or two recipes with you, but they’re all so lovely. I think I shall make this the type of food I eat for Passover this year. I have no Greek ancestry, but I’m an 1/8 Sephardi, so that will do. Either way, I shall celebrate one of the finest cuisines I’ve encountered.

Passover is an eight day festival that has very specific cooking. No observant Jews eat leavening, Askenazis don’t eat some legumes. It can be complicated. Just for today (for Passover is over a week away) I shall skip the complications and head straight for the special recipes for the festival itself. My family has a chicken soup, and something we call “matzah brie” (its name doesn’t rhyme with the name of the cheese) and we eat a lot of pickles. This is very much the Australian version of Eastern and Central European Jewish food.

This year I shall be adding haminados (an egg dish) to that, along with a chicken soup and bourekia, both made without leavening.

This cookbook also gives some of the history of the festival. Stravroulakis talks about the picnic that Greek Jews have on the last day of the festival, for instance, and the ovens some localities had that were specifically used for the unleavened bread we eat throughout the eight days.

History and food are so tightly linked that it’s impossible to separate them. The world likes to assume that Jewish history is simple and that Jews are all the same. Our food reminds us that the world is wrong. We eat our favourite foods to keep our identities straight. We’ve done this for a very long time, so it helps keep our history straight, too. This is one of the critical reasons why food and history are so tightly linked. It’s also a reason why concentration camp victims sometime wrote cookbooks while being starved. We can retain joy in our food-culture even when there is no joy left in the world.

This is my theory, anyhow. Stravroulakis supports my theory (without knowing it) by giving five recipes for charoset. Charoest is a symbolic dish – it’s to remind Jews of the mortar used when we were forced to build for others in Ancient Egypt. It’s the history and the food tightly bound
Add different recipes for different regions and groups within the region and even families, and it’s possible to explain how Jewish cultural integrity works, historically, just by eating. The Greek charoseth recipes have dates and raisins and currants. My family’s recipe has almonds and apple and cinnamon. All our recipes have wine. 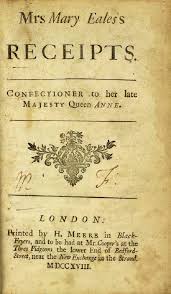 The other cookbook is the polar opposite in history terms. It’s someone saying “Look at me!” Not “We shall remember who we are and celebrate survival” but “I am important enough to write my own cookbook.”

I don’t use this volume very often, but I look at it a lot. It reminds me that some people are shiny and get a lot of attention in their time, but are forgotten very soon after. In this case, Mrs Mary Eales is remembered only through her cookbook.

Eales claims in her book that she was the confectioner to Queen Anne. Shiny. Someone who pushed her own importance during her lifetime and was probably given great respect for it, but whose star waned and who is now largely forgotten. This is important to me now because of the number of people who push and say “Look how important I am.”

We can judge Eales by her recipes and her cuisine. We no longer get the glamour. Some historical figures retain glamour – Richard I, for instance, or Madame de Pompadour. In everyday life, these aren’t the people we would think are shiny if we were around them. They wouldn’t move in our circles, or even at the edge of our circles. We’d focus on those closer to home and talk about how special they are. Some of them would genuinely be special and some of them would be hollow with only the shine making them worthy of attention.

The fact that Eales wrote down her recipes and that someone published them after her death means that she was one of these shiny people. Not so many people published in the early eighteenth century, so this small cookbook says a lot about how she was seen. It enabled her to continue to be seen, too, for the book was published and republished, and republished again. Mrs Mary Eales was very shiny for a while. This is certain. Her shine faded later in the century and her book went out of print.

The book is a careful listing of the types of sweets one can make with a set range of ingredients. The recipes are mostly not very original. They’re very much of their time, which is the early eighteenth century. She wasn’t testing herself by creating the limited range: those were the ingredients available just then.

Those ingredients reflect the trade routes and the local farms. They show us a lot about the society Mrs Eales lived in. They also show us a careful woman who didn’t just buy ingredients and cook with them. She thought about preservation and making sure there was food across the null seasons. Angelica was dried, green apricots were preserved, cherries were turned into jam, currants were transformed into clear-cakes.

Mrs Eales gives a complete guide for making sure that the fruit and even some of the nuts and vegetables of one season could be available for cooking all year round. Then she gives the recipes using both fresh and preserved fruit.

It’s very much the food of the south of England. So much cream! Clouted Cream and Spanish Butter and “all sorts of Fruit-Cream” and, for the first time in any English language cookbook, ice cream.
It’s a household manual as much as a cookbook, but it’s at the luxury end. How to make the food that enriches the day and widens the waistline and makes many people much happier. Given how even writing about it makes me happier, I’d say that the woman who carefully worked all this out and made all these recipes (which I have tested for deliciousness, but which I don’t make any more because of the sheer abundance of cream and because some of the ingredients are not easy to find or even safe) is a woman of substance. Not just shiny.

These recipes make history sexier. So do those of the Jews of Greece. They do so, however, in entirely different ways. 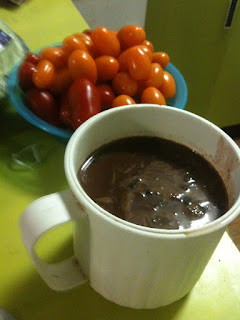 I remember a recipe from that time which began something like "take twelve good eggs and..." I gave up any idea of making it right there but they did make the most amazing things = for the upper classes.

I love recipes that begin "Take twelve good eggs" or something similar. I admit, if I'm making those dishes for myself, I'll divide them by four! It isn't the eggs that most frighten me, it's measuring cream by the quart.

I take your very good point about the difference between special and shiny too! Very interesting post.

"Shiny". Thank you for this reassuringly descriptive word and its context.

Thank you too for you post, Gillian. Reading about all sorts of food stories - and cookbooks - does help bring on happier thoughts. Hope those doldrums disappear.

Talking about food with interesting people helped a lot with the doldrums!

I'm glad that 'shiny' was useful. The difference has helped me in cultural analysis. Now all I need to do is find out what triggers those responses ie why we think someone is shiny.

Lovely post, thank you Gillian! I love old cookery books. Food tells us so much about how people were living in different times and different places.

Food is one of my favourite ways to find the past!