The National Trust is wonderful on many counts. It's saved hundreds of stately homes, little homes, pieces of countryside, stretches of coastline and more for the nation (that means for us, all of us); it constantly strives to manage its estates in a way that is careful of the environment (take a lesson from that, Mr Trump); it's a source of delectable cakes; it commissions books and sells nice things in its shops; and it educates - you learn while you look.

I recently visited North Norfolk, staying in a cottage on the Blickling Hall estate. Blickling is a Jacobean house, made of mellow russet brick and creamy gold limestone. It has curly gables and towers with turrets, decorative chimneys and leaded windows. It was built on the site of an older house, which belonged to the Boleyn family. It's uncertain whether the unfortunate Ann was actually born here. She's said to appear - headless - in a coach driven by a headless coachman and four headless horses, on the anniversary of her execution, but I prefer to think of her as a child, running along its corridors and playing hide-and-seek in the garden, utterly unaware of the dramas in front of her. There is a wooden relief portrait of her in the hallway, which proudly proclaims that she was indeed Hic Nata - born here; it looks a little odd, because it was done in the 18th century, and the line of her clothes reflects that rea rather than the Tudor one.

But the woman who caught my interest came much later and was far less well known. She was called Norah Lindsay (1873-1948, and she was a gardener. Here she is. 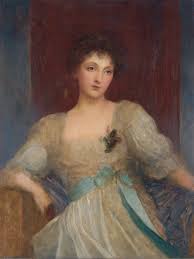 She doesn't look as if she'd be one to get her hands dirty, does she? She was born into an upper-class Anglo-Irish family, and married Sir Harry Lindsay at the age of 22. She went to live at Sutton Courtenay Manor in Oxfordshire, where she became interested in gardening - and this was what saved her when, in 1924, her marriage had collapsed, her divorce went through, and she was facing financial ruin. Her friends rallied round, and commissions to design gardens both at home and abroad soon came pouring in.

So far, so Wikipedia. But I learnt a good deal more from a talk and tour at Blickling, by a volunteer who was such a fan of Norah that she dressed in character, in bright colours and with a scarf would round her head like a turban. (Clearly, her taste in clothes had changed considerably since the time of the portrait.)

In some ways, it must have been a very pleasant way of life. When she came to Blickling to redesign the parterre (the formal garden in front of the house), she lived as a guest. But that wasn't quite what she was, and the servants knew it. Our guide hinted that she was difficult - did she trail in mud from the garden, perhaps? Or was it simply that they knew that she was in that uncomfortable, indeterminate territory somewhere between the servants and their masters? She always had a lady's maid, but she didn't seem to have much money; she travelled on public transport between her prestigious commissions, and she didn't earn enough to maintain her beloved Sutton Courtenay.

But the gardeners thought she was wonderful. She wasn't just a designer, like her predecessors in other parts of Norfolk, Humphrey Repton and Capability Brown; she really knew plants, and she was quite happy to wade in with a trowel herself.

The parterre had last been re-done in 1872, when an elaborate sunken garden was created with a complex arrangement of over 80 flowerbeds radiating out from a central fountain. Now, in 1930, tastes had changed. It all seemed rather fussy. And anyway, it was too expensive to employ the vast numbers of workers who would have been needed to keep it all in order. Norah designed a simpler, more elegant arrangement, with four large, rectangular beds full of herbaceous plants with topiary yew trees at each corner to provide structure, and narrow borders filled with roses. 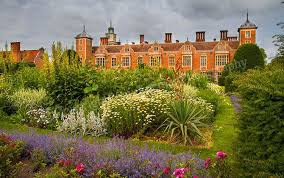 When we were there, there wasn't much to see in the parterre. Everything was still brown in the main beds, though tulips were in bud. I would love to see those beds later in the season; in pictures, they look glorious - full of colour and texture. There was a consolation prize, though - these primroses, further on in the garden.

In another part of the grounds, the walled garden is being brought back to life. Two years ago, this was all grass. Now it's ready once again to produce the vast quantities of fruit and vegetables which once fed the whole estate; the excess was sent to London to be sold. But again, it was the guide who brought it home to us that in the past, there were no supermarkets to nip out to when you ran out of something: everything had to be produced on the estate.

The Trust enables you to see history, almost in action; sometimes to touch it, even to smell it. And then there's the cakes... and at Blickling, a wonderful second-hand bookshop. It's a gift that just keeps on giving.

Norah sounds fascinating - if we ever do another Daughters of Time, she'd be fun to write about! Thanks for this, Sue.

It must have been such an odd life - living in 'society', yet with very little money to get between jobs - but she created such lovely gardens. Fascinating to hear how fashions in garden design were impacted on by practical considerations, such as how many gardeners you could afford.

Really enjoyed "meeting" Nora Lindsay through your excellent post, Sue, and I'm sure the Blickling Hall NT guide was very pleased to have such an interested listener for all her knowledge as well.

You might enjoy the book : Norah Lindsay: The Life and Art of a Garden Designer by Allyson Hayward (Frances Lincoln: 2007)