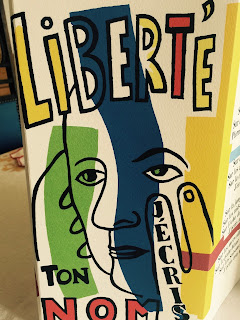 Recently, when I was in Paris, I visited the Bon Marché store, which is a regular haunt of mine. I usually head directly to the top floor where they have a very excellent librarie/bookshop. I love to browse there and to see what is being published in French and also who has been translated into French. During my last visit, I chanced upon this title, LIBERTY, which is not a book as such but an illustrated poem. The poem was written by Paul Éluard, published clandenstinely in 1942 - during the German occupation of France -  and, later, illustrated by the artist Fernand Léger. I was intrigued and bought it instantly. My plan is to frame it and hang it on the wall. When I  took it from its box  and it opened like a concertina, I found alongside it, an excellent history of the poem's destiny which is a tale in itself.

The poem, Liberty, was taught in schools. It was adapted to a song and recited in cinemas. It symbolised La Résistance and indeed the fight against all forms of oppression. It was passed on, hand to hand, across America and Europe, recited on the radio and learnt by heart by many of the RAF parachutists. It brought hope to a country and a people living under the oppression of Vichy and the German occupation.

In 1952 when Paul Éluard died, his editor friend, publisher and fellow resistance fighter, Pierre Seghers, wanted to honour his lost friend.  It was then that  Seghers approached Éluard very good friend, Leger, and asked him to illustrated the poem to be printed as a homage to a man who always used his poetry to fight for Liberty, Freedom. 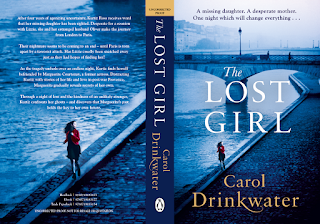 After the attacks in Paris of 13th November 2015, which caused the deaths of many more than 100 people, this poem was posted outside the Pompidou Centre. My new novel THE LOST GIRL takes place in Paris over that horrendous weekend and also in post WWII Provence. So, finding this poem at this time is particularly poignant to me.

Here is the poem: 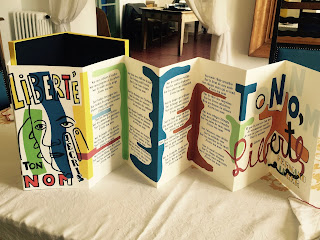 On my notebooks from school

On my desk and the trees

On the sand on the snow

On every page read

On all the white sheets


On the golden images

On the soldier’s weapons

On the crowns of kings

On the jungle the desert

The nests and the bushes

On the echo of childhood

On the wonder of nights

On the white bread of days

On the seasons engaged

On all my blue rags

On the pond mildewed sun

On the lake living moon

On the fields the horizon

The wings of the birds

On the windmill of shadows

On each breath of the dawn

On the ships on the sea

On the mountain demented

On the foam of the clouds

On the sweat of the storm

On the glittering forms

On the bells of colour

On the wakened paths

On the opened ways

On the scattered places

On the lamp that gives light

On the lamp that is drowned

On my house reunited

On the bisected fruit

Of my mirror and room

On my bed’s empty shell

On my dog greedy tender

On his listening ears

On his awkward paws

On the sill of my door

On the fire’s sacred stream

On all flesh that’s in tune

On the brows of my friends

On each hand that extends

On the glass of surprises

On lips that attend

High over the silence

On my ravaged refuges

On my fallen lighthouses

On the walls of my boredom

On the marches of death

On danger that’s past

On hope without memories

By the power of the word

I regain my life

I was born to know you

And to name you 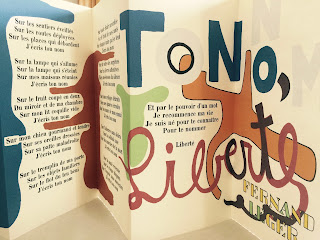 We, in France, went to the polls last Sunday and we will return again on 7th May for the second round to vote for one of the two remaining candidates. It is a very tense time. Marine Le Pen, leader of the Front National, has reached this second round. France stands before its commitment to Liberty. Its right for each and everyone of us to be who we are, believe in what we want, love who we will. AS LONG AS THESE ACTS DO NOT HURT OR TRANGRESS ANOTHER'S RIGHTS. Whether we are supporters of Macron or not, France needs to stand up for all it has fought for, for what is fundamental to this country. I know that if Paul Éluard were alive today he, along with his compatriots, would be delivering leaflets with this poem on it. This my way of posting his words, of passing his message along.
Men have died for the rights that are being threatened by the FN. It is our duty to speak out against them and honour those who gave their energy for our Liberty.

Bravo!
And thank you. Beautiful poem.

Great article, Carol. I really enjoyed reading it - as I always do. What a beautiful find. It's a fabulous poem. The repetition of 'sur' and 'j'écris ton nom' have high impact and I can feel the rumblings of Revolution! Thank you for sharing.

Vive la liberte, indeed. I'm not totally enthusiastic about Macron, but it's crucial to keep a neo-Fascist out. Only tragic that we should have these ugly creeds poking their heads up once again. As Brendan Cox said, writing in the Guardian on Tuesday; every generation has the job of holding onto crucial values and keeping at bay those who would devalue them and destroy human rights.

I pray your country does better than USA did.

Lovely piece and lovely poem - and fingers crossed for the next stage of the election.