Here, in the imagination of John Waterhouse, is the Fair Rosamund, leaning out of a rose-bedecked tower window, longing for her lover King Henry II while her cruel rival and soon-to-be-murderer Queen Eleanor peers at her from behind the arras. Most of this is pure fiction. The reason I'm depicting her here is that back in the 12th century 'Rosamund' was an extremely unusual given name. It was possibly unique to this particular woman and was rare throughout the entire medieval period, probably because rosa munda (pure rose) and rosa mundi (rose of the world) were epithets reserved for the Virgin Mary.

One of my pet bug-bears about historical novels set in ‘medieval times' is when authors call their characters by names which are unhistorical for the century in which the story is set: after all, the term 'medieval' covers about half of a millenium during which an awful lot of changes in fashion occurred. Fantasies (I'm sorry to say) are some of the worst offenders, perhaps because a vague medieval ambiance is all the author really wants. This is fine if the story is set in some fantasy-land or fairyland in which dragons dwell, where wicked knights in black plate-armour inhabit grim stone castles at one end of the village, fair damsels live in rose-smothered cottages at the other, honest peasants toil in the fields somewhere in the middle, and the whole is surrounded by darksome woods. But – but! – if you start telling me the wicked knights are Normans and the peasants and the heroine are Saxons, and if you set the story ‘just after the Norman Conquest’, then I feel you, the author, ought to get a grip and do your best to present me with a reasonably accurate picture of the time.

The period of active Saxon rebellion against the Norman invaders lasted till about 1070: after that, any widespread popular resentment, if indeed it existed, was probably short-lived. True, the Normans displaced or eliminated most of the Saxon nobility, but for the peasants, free or unfree, life did not change very much. So in a novel set during the century after 1066, the wicked knight will be wearing chain-mail, not plate armour. Unless he is very important indeed he will live not in a stone castle but in a wooden fort on a mound surrounded by a stockade (as the Montgomery lords did at Hen Gomen, not building their stone castle until 1223). And though the peasants will certainly still be toiling in the fields, the fair damsel’s cottage will have no red roses around the door, since cultivated roses would have been a hugely expensive rarity. Moreover, if she’s a Saxon she ought to be called something like Aelfthryth or Eadburh or Edith – not Mary or Alison, names which won't appear for about another two hundred years. If the heroine is a Norman lady you may name her Rose so long as you spell it Roheis, Rothais or Roesia: but be aware that after the 12th century the name goes out of use for about seven hundred years.

Here, for the benefit of all of us, is a masterclass from Lord Raglan (1885-1964) in nomenclature for the early medieval period. “Let us start with the Saxons,” he begins,

and note without surprise that they were called by Saxon names. Examples of such names may be found in any history – Godwin, Stigand, Siward, Leofric.  The Saxons were not called William, Walter or Robert, because these were Norman-French names which were introduced into England by the Normans. A pre-Conquest Saxon would be no more likely to be called by a Norman-French name than a modern Englishman to be called Marcel or Gaston.

So much for the Christian names of the Saxons; now to surnames. The Saxons had no surnames. A Godric might be referred to as ‘the timberer’ or ‘the son of Guthlac’, but these were not his names; whether he was earl or churl he had one name, and one name only. This single name was never a place name. Like the Scandinavians, Irish and Welsh, the Saxons never used place-names as personal names. It is clear then that when a Saxon ‘ancestor’ is claimed to have been called Bertram Ashburnham or William Pewse, he must be a fake, since no Saxon was ever called Bertram or Ashburnham or William or Pewse.

The case of the Normans is different. During their residence in France the Normans had almost completely dropped their Norse names, and had adopted such Frankish names as Richard, Hugh and Baldwin. William [the Conqueror’s] army contained many Frenchmen and Flemings, as well as Normans, but their names were much the same. There was also a contingent of Bretons, who had some names of their own. Of these, Alan was the commonest, though the ancestor of the FitzAlans ... did not come over till the next century.

In that century [the 12th] a few Biblical names began to creep in, probably under the influence of the Crusades [the First Crusade began in 1095]; previously such names as John and Thomas are not found among either Normans or Saxons.

About 1400 place-names began to be borne as surnames without ‘de’ or ‘of’ before them, and it was then, and not till then, that it became possible for men to be called Bertram Ashburnham or William Pewse.

And what about women? Well, ‘the most popular names’ for the 12th century look quite unusual to us now. They include (see this list) Edith, Aethelflaete, Alfgyth, Burwenna, Botilda, Annora, Rikilda, Cecily, Godeva, Ingrid... all much more common than ‘Rosamond’ or ‘Rosmunda’ which turns up only three times between 1206 and 1282. Of course there were unusual names in every century. I really adore the wonderful Dayluue or ‘Daylove’ [OE *Dæglufu], which also turns up three times.

In the 13th century (see here) Matilda comes top of the list, followed by Alice, Agnes or Agneta, Edith, Emma, Margaret, Mabel, Alviva, Isabella or Ysabel, Christiana and Juliana. Most of these are still common in the 14th and 15th centuries, but Joan or Johana now joins the list, as do Katherine and Elizabeth.

By the 16th century (see here) Elizabeth seems most popular, along – in diminishing order – with Margaret, Jane, Agnes, Isabel, Anne, Alice, Katherine, Jennet, Elinor, Margery, Mary, Dorothy, Ellen, Barbara and Susanna.
Returning briefly to the Fair Rosamund: she was born circa 1148 at Clifford Castle in Herefordshire, became Henry II's mistress probably around 1166, and died in 1176, not yet thirty. Her wikipedia entry calls her Rosamond Clifford, but as Raglan points out, that wouldn't have been how she was known during her life. She was Rosamund, daughter of Walter FitzRichard (aka Walter de Clifford). Her mother was Margaret. And she had two sisters, Lucy and Amice.

Rosamund, Lucy and Amice: Pure Rose, Light, and Friendship... I wonder which parent it was who chose such fancy names for their three beautiful daughters? 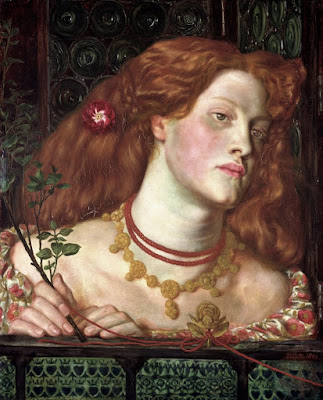 Interesting. I have studied names of that period extensively for my own research. There's nothing better than getting right back to primary source for studying those names. I have curia regis rolls, pipe rolls and feets of fines for various counties in my chosen period of the 12th thru 13th centuries. I can say that you will find Thomas occasionally among the Saxon names and John is prolific soon after the Norman Conquest.
It's fascinating to find regional variations among the names and you will find the Scandinavian names lingering on until the reign of King John in Norfolk - Ketil, Hakon, Gunnilda etc, but then changing as parents give their sons and daughters Norman names. There's a definite shift.
With female names there is much to surprise one. Tiffany and Gemma for example, and even Snow-White - (spelled as Snowit and Snawit).
It's a fascinating subject.

I have a fascinating book (found in a second hand book shop) called "Names through the ages" by Teresa Norman. There are lists for various periods of history in it and seeing the gradual changes, the names that have disappeared and those that have survived says so much about the way we have changed too.

Elizabeth, thanks for your comment. Yes, isn't Tiffany a Breton name? The wife of the famous Bertrand du Guesclin was (I think) a Breton lady called Tiffany: rumour had it she was in fact a fairy. Cat, your book sounds wonderful! Sue - thanks!

I used baptismal registers and burial records (from the County Archives) for the 17th C names in Malefice. I'm impressed by the care and scholarship demonstrated by my colleagues here.

Aethelflaete makes me think of too many beans for dinner, though...

It's forgivable when an amateur, or someone on their first - usually self published - book gets it wrong, but a while ago I got a review book that had so many errors in historical naming - as well as others - I wondered about the editing team at that publisher. No names here - I ended up giving the author an interview instead and keeping the questions careful - but it was by a best-selling author who ought to have known better. I can only assume the publisher decided not to bother too much with editing as the book would sell anyway.

And then there was the convent known as Our Lady of Notre Dame, ie, "Our Lady of Our Lady..."

That last one! Oops!

No worse than LAKE Windermere or even Lake Ullswater!

Fascinating blog, thank you. I wonder if publishers let historic anachronisms slip through because modern readers find it 'easier' to relate to names they know, or just because they can't be bothered?
My favourite quote is from an American film my father-in -law claimed to have seen in the 1940s: Man in knitted chain mail and brylcremed hair leaps onto battlement and proclaims, 'Men of the Middle Ages, we are about to embark on the hundred years war!'

Publishers, and proof readers, are mainly not expert themselves, I think..