TURNING ON THE LIGHTS : How I write a historical novel by Elizabeth Chadwick. 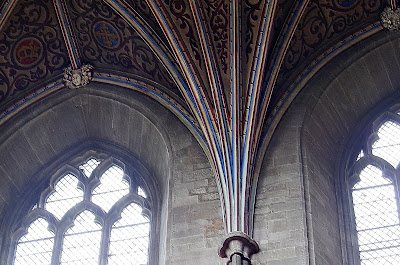 It's that time again.  Having completed my latest project and handed it in,  I am turning my attention to the next contracted novel.
I have known for a while that it is going to be about Aoife (pronounced Eefa) daughter of Diarmit MacMurchada, king of Leinster, her marriage to Norman adventurer Richard de Clare and how Aoife held her own during  some incredibly difficult political, social and emotional storms.

I was saying to my agent the other day that an analogy for coming to a new historical project is rather like being given the keys to a mansion.  I arrive at night and all I can see is a darkened silhouette. Unlocking the door and entering the house, I stand for a moment, tuning in to the atmosphere. Listening, feeling the electricity raise the fine hairs on my arms.
I know I have to explore the mansion thoroughly to understand its layout, its quirks and foibles - and traps.  I need to turn on the lights and go from cellar to attic, studying the dimensions and familiarising myself with every nook and cranny because this is going to be my place of work for the next eighteen months.  This house is someone's story and it is my job to furbish it with their truth.  To remove the dust sheets and the detritus. To polish and illuminate until that mansion glows with light.

For the moment many rooms remain in darkness and behind locked doors.  It is for me to find the lights and the keys as I write. That part of the journey is as yet unknown. I have to decide what to showcase and what to leave as background ambience.

I go into the kitchen, the hub of the home, I  make myself a large mug of tea (I'm not a wine fan). I sit down at the scrubbed wooden table, and I begin to make plans.

The first thing I do is discover more  about my chosen subject.   I have already obtained the necessary research books concerned with my protagonists and their hinterland and I also have my web browser open.   I set about familiarising myself in a general way with my subject, their life and times, and then I go into more depth.
I am looking for angles that while absolutely true to the characters also highlight information that has never been looked at before, or not in quite the same way. For example, in my Eleanor of Aquitaine trilogy, I discovered from reading around that new research shows she was 13 when she married,not 15.  As far as I know, I am the only historical novelist to have written the story of that relationship from that age perspective - and it makes a huge difference to how the politics and relationships are played out.
I began researching the 12th century in the early 1970's and have never stopped, so I do have a reasonable base line knowledge to help bring me up to speed.   I am not starting from scratch.  At this stage I will also use psychic snapshots and compare them against the known history. I find this utterly invaluable and I use conventional history and the psychic in tandem. (I wrote a post about using the latter in an earlier History Girls post here):Alternative Research

Once I have the broad outline of the story, I write a highly detailed synopsis. It's not so much a selling document as a ground plan of the mansion for me, and information for my editor and agent as to what I'm going to be up to for the next year and a half. If I was approaching an agent or editor for the first time, it would be a tight one pager.  As it is, the working synopsis is  more likely to be around 12 pages of single-spaced text.

The synopsis completed, I then write a short 'blurb'.  The sort of thing you see on dust jackets or on the back of books.  It will give the reader a brief gist of the contents,  and be written in an economic but emotive way that will make them eager to read the work.  I

I write character studies of the main players -who they are in their world, how old they are, what they look like, their personality traits etc.

The preparation work completed, which has probably taken me around two weeks (not including background reading at mealtimes and in the bath!)  I begin writing, continuing the research and deepening it as I go.  It's the equivalent of going into that first room, switching on the lights, removing the dust sheets and  arranging the furniture.

I write the first three chapters in depth and polish them.  That first room becomes a showpiece for my agent and editor and also the readers.  I send the synopsis, blurb, character studies and chapters to my agent and editor, and then continue to write the first draft. I don't look back on that first draft now.   I go into rooms, pulling back curtains, shaking off more dust sheets, cleaning the chandeliers and adjusting the lighting.  Sometimes I will try out fabrics and colour schemes and then, not satisfied, change my mind and discard.  All the time I am writing that first draft, I am researching on the side and discovering more about my characters.)  An author should never dump historical information into their novel in chunks just for the sake of it. Research exists to inform the story and enable the author to walk with confidence in the world he or she has created. It allows that author to see the world through the eyes of the  protagonists. I cannot know my characters without  knowing their world as intimately as I know my own.  That intimate knowledge underpins the story and makes it flow organically and avoids those  'info-dump' moments.   It's vital to do the research because without it, the characters may show a tendency to come over as modern people in fancy dress. The rooms in the mansion must have the furniture that reflects their occupants.

Once the sketch draft is complete, I return to the beginning and start editing.familiarity and deeper research.  It's a time to begin the finesse of fine tuning and looking at all the room as a whole.  Do they work together?  What needs adding?  What needs taking away?  Are there more rooms to be unlocked and discovered? Others that are better left closed with the dust sheets put back?   Once I have made those decisions I print out the next draft and read as a paper copy and make alterations with a biro. I then key the alterations into the PC while giving the manuscript another read through.
After that, I print out out again and read aloud.  This is like hoovering the floor and polishing the tables before the guests arrive. It's like chilling the wine and polishing the crystal.

And finally (and after some preliminary viewings by a select few such as my agent and editor)  I throw the mansion open to the public, the door widening on a path of sunlight leading into the hall. And beyond that, more subtle light and shade,  illuminating and draping people who are eager to tell their story and are so much more than names in a book.

Elizabeth Chadwick is a best selling author of more than twenty historical novels, including New York Times bestseller The Greatest Knight, and a trilogy about Eleanor of Aquitaine - The Summer Queen, The Winter Crown and the Autumn Throne.  She has just handed in Templar Silks, a novel about William Marshal's pilgrimage to the Holy Land in 1183-1186.  Due for publication in Autumn 2017. 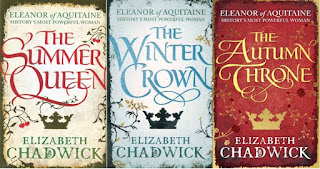 Fascinating - thanks, Elizabeth. I'm very impressed that you only spend two weeks researching and planning - though clearly, as you say, you have a great deal of baseline knowledge already.