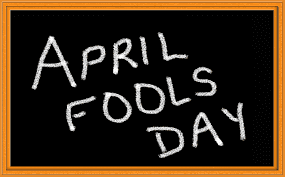 Today, I'm Mary Hoffman and that's no April Fool. We've swapped days for this month. My day is the 18th, the kind of day when nothing much ever happened, but 1st April is April Fools' or All Fools' Day. Now, there's something to blog about...

Traditionally, pranks or hoaxes are played until midday and after that the joke rebounds on the hoaxer. Anyone been caught yet? A time in the calendar when fooling is allowed and tricks can be played is common in many parts of the world, although why our date should be the 1st April is shrouded in mystery. Every theory is disputed. One common idea is that April 1st marked the beginning of the year until the Gregorian Calendar was introduced and January Ist became New Year’s Day. People who still celebrated on April 1st were mocked as ‘April Fools’ but this has always seemed thin to me. Some theories point to the date's proximity to the vernal equinox – a time of celebration since ancient times. Other theories suggest that the custom can be traced back to the Romans. Although one explanation, put forward by one Joseph Boskin, a Professor of History at Boston University (that bit is true), asserting that the practice began in the reign of the Emperor Constantine turned out to be itself a hoax.

Over the years, there have been memorable hoax news stories reported in the newspapers and on TV.  On April Fool's Day, 1957, the BBC had a three minute report on Panorama showing a family in Switzerland harvesting spaghetti.

After the broadcast, a number of viewers contacted the BBC for advice on growing their own spaghetti. Since most people's acquaintance with spaghetti in 1957 would have been via a Heinz tin, maybe that was understandable.

In 2008, the BBC carried out another elaborate hoax when ex Python Terry Jones reported on a colony of flying penguins. I don't know how many people believed it, but I'd have thought the presenter might have given a clue.

On April 1st, newspapers traditionally carry at least one hoax story often on the front page. On April Fools' Day, 1977, The Guardian published a seven page supplement featuring the fictional mid-ocean state of San Serriffe and in 2010 The Daily Telegraph would have had us believe that Virgin Media were using ferrets to lay their cable "due to their strong nesting instinct, their long, lean build and inquisitive nature, and for their ability to get down holes."

The internet has been quick to get in on the act. Google is well known for running annual April Fool's jokes and in 2007, a designer of illusions for magicians posted an image of a dead fairy on his web site. He later sold it on eBay for £280. The internet and social media have made hoaxing a whole lot easier.

I wonder what the news media have in store for us today? Although in these days of false news and alt news who needs hoax stories? With Brexit triggered and Trump in the White House, spaghetti trees and flying penguins seem to belong to more innocent times.

Oooft, ended on a bit of a low note...! I managed to completely miss any tricks or fooling this morning by virtue of being a lazy recluse who is not yet out of her jammies.

I do love the gentle ones, like the spaghetti harvest. Or like the National Library of Scotland putting up a video proposing that speed reading become an official Olympic sport this morning.

The Telegraph has one about a Polar Bear having turned up in North Uist, with speculation that a whole colony may soon be in Glasgow. I'm saddened that they missed the opportunity to suggest that it was hunting wild haggis there.

The Guardian's isn't very funny, sadly. I think they have yet to equal San Serife (which, as you may know, made it's way into the British Library's recent Maps exhibition..)

Norway banned hoax stories today because they could be seen as false news (could have been a hoax though...)

If only it wasn't a hoax about the ferrets laying cable. They would be so much more efficient than our current smug telecoms companies. And I bet they would answer the phone, if they could.