All for Love? Pride and Prejudice, Hermsprong, and rational attachment

'whom she regarded herself with an interest, if not quite so tender, at least as reasonable and just, as what Jane felt for Bingley.'

Thus Elizabeth Bennet on her future husband, Darcy. A lot of people regard Jane Austen as romantic fiction nowadays (maybe because of that episode when Darcy appeared before Elizabeth in a wet shirt). But for all Darcy's 'fine, tall person, handsome features, noble mien', Pride and Prejudice is absolutely not about a young woman succumbing to a fit of romantic, overpowering emotion, to say nothing of sexual attraction.

A couple of years ago, I came across a mention of Robert Bage's 'Hermsprong,' a book which Jane Austen had on her shelves. It's an interesting read for many reasons; one, the reiteration of the couplet 'pride and prejudice' on its pages, though for all I know the pairing of the words may well have been common at that time. It was published in 1796, a year before Austen completed the first draft of what was at that time called 'First Impressions.' And if it is a harder read than Pride and Prejudice, when you get into it, and past the rather laboured prologue, it's a fascinating one, particularly because of resonances with Pride and Prejudice. 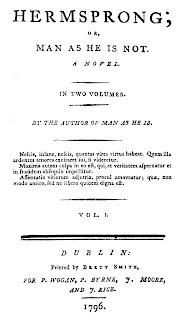 One theme is the irrationality of revering persons just because of their high rank and how respect must be earned (Bage was known as a democrat, which wasn't a compliment in many circles. He had read Tom Paine and didn't concur in the dogma that the British form of government was the best possible, which in the days of repression following the French Revolution, was dangerous). Pride and Prejudice is not a radical text, but the folly of snobbery is important in the text, as it is in other Austen novels (think silly, feckless Sir Walter Eliot, brown-nosing his noble connections and condescending to those he thinks 'inferior' to himself'). However, what I want to talk about here is the issue of how anyone can achieve lasting happiness in marriage.

Clearly, the 'presenting theme' of Pride and Prejudice, announced in the first paragraph, is the importance of getting a husband (and an establishment) in the first place. Mrs Bennet knows this, and is hot on the scent of profitable husbands; not half as foolish as she's portrayed. Charlotte Lucas makes a cold-eyed choice of Mr Collins; marriage being: 'the only honourable provision for well-educated young women of small fortune, and, however uncertain of giving happiness, must be their pleasantest preservative from want.' Charlotte's solution to the stupidity of the man she must live with is to forget him as much as possible, and enjoy looking after her parish and her poultry, and, later on no doubt, her children. It's to be hoped they don't take after their father.

However, there was a common preoccupation at that era (and perhaps at any era) with the question of how long-term marital happiness is to be achieved. Eighteenth century people were well aware that 'being in love', assuming a marriage began like that, rather than as a commercial transaction, would not last. Arguing with the Falmouth banker, Sumelin (a man whose teasing of his wife strongly resembles Mr Bennet's teasing of Mrs Bennet, only Sumelin's teasing is less malicious, not to say malevolent) the eponymous hero of Hermsprong quotes Mary Wollstonecraft, saying that the influence of women should be 'diminished on the side of - charms - and let its future increase be on the side of mind.' The reason for this is that it is not common for husbands 'to preserve the ardour of lovers.' What to do when that first ardour has subsided is crucial, if the married couple is not to slide into the matrimonial nastiness that characterises the Bennets' relationship. Their daughter Elizabeth is well aware of this: 'Had Elizabeth's opinion been all drawn from her own family, she could not have formed a very pleasing picture of conjugal felicity or domestic comfort, Her father, captivated by youth and beauty, and that appearance of good humour, which youth and beauty generally give, had married a woman whose weak understanding and illiberal mind, had very early in their marriage put an end to all real affection for her. Respect, esteem and confidence, had vanished for ever; and all his views of domestic happiness were overthrown.'


Writing in A Vindication of the Rights of Women, Mary Wollstonecraft observed: 'Youth is the season for love in both sexes; but in those days of thoughtless enjoyment provision should be made for the more important years of life, when reflection takes the place of sensation… This is, must be, the course of nature - friendship or indifference inevitably succeeds love.'

Hermsprong and his Caroline take long walks together and discover how much they have in common as well as falling in love. It has to be said that I much prefer Caroline's less virtuous bosom friend Maria Fluart, a fascinating, independent-minded woman who supports Caroline against her abusive father Lord Grondale and, when Grondale tries to keep her in his house against her will, whips out a pistol and levels it at him and his friends. Did Roald Dahl read Hermsprong, I wonder? Maria Fluart doesn't whip the pistol out of her knickers, as Dahl's Red Riding Hood does, because women didn't wear knickers in those days, but there is a marked similarity.

All the same, Hermsprong and Caroline are ideally suited to each other, and are likely to remain friends all their lives. This is the point of the novel.

Consider, therefore, Elizabeth's feelings about Darcy: ' She began now to comprehend that he was exactly the man, who, in disposition and talents, would most suit her. His understanding and temper, though unlike her own, would have answered all her wishes. It was a union that must have been to the advantage of both; by her ease and liveliness, his mind might have been softened, his manners improved, and from his judgment, information, and knowledge of the world, she must have received benefit of greater importance.' And this would be a marriage which 'could.. teach the admiring multitude what connubial felicity really was.'

Compare this with the union of Lydia and Wickham 'a couple who were only brought together because their passions were stronger than their virtue.' It is not, of course, impossible that Lydia and Wickham might after all become friends, but it is unlikely, and in fact Austen indicates that it doesn't happen.

Radical Austen is not, nor is she a feminist in the way Wollstonecraft is, and yet her novels recommend marriages which are based on the suitability for each other of the heroine and hero; not based on rent-rolls, or snobbery, or the desire to keep estates in the family - and not on a dizzying storm of sexual attraction either.

This is a very interesting angle on her, Leslie, although I'm not quite convinced. Money snobbery does play a pretty big part in these women's lives.

Well, there is Elizabeth's comment to Jane that she began to fall in love with Darcy when she saw his beautiful grounds at Pemberley.. But look at the way she praises the grounds, how they were exactly to her taste. I think as much as money snobbery it's the elegance that he would offer her, in contrast to the vulgarity of Lizzy's near relations.