Six of the Best Austen Adaptations by Katherine Clements 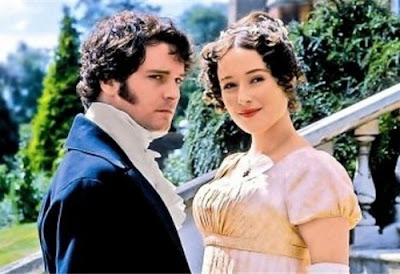 It is a truth universally acknowledged that the film is never as good as the book. That hasn’t stopped millions of Austen fans enjoying countless movie and TV versions of her novels. I can’t prove it, but Jane must be one of our most adapted authors, along with Dickens and Shakespeare. She’s become the undisputed queen of costume drama; the slate of BBC adaptations alone reads like a history of British broadcasting. 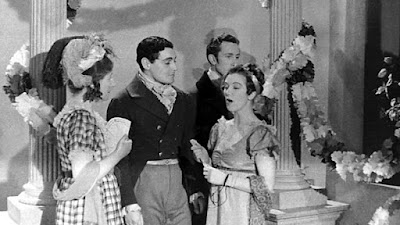 It all began in 1924, when the proposal scene from Pride and Prejudice was aired on the BBC’s first radio station to an exclusive London audience. The first filmed version came 14 years later – a lavish affair, broadcast live from Alexandra Palace in May 1938, scheduled in the now traditional Sunday evening slot. Sadly, this performance (pictured above) and many other live broadcasts from the 30s and 40s are now lost. Videotape recording wasn’t possible until the 50s so the earliest BBC adaptations we have in their original form come from the 1970s.

There is a delightful film from the BBC with lots more information about those lost Austens here.

The most famous early adaptation must be MGM’s 1940 production of Pride and Prejudice, starring Greer Garson as Lizzie and a brooding Laurence Olivier as Darcy. With an occasionally hilarious script and dubious costumes, this is Austen given the Golden Age of Hollywood treatment, well before matters of authenticity were a consideration. Still, it’s essential viewing for Austen completists. The fabulous trailer gives a flavour…


Through the 70s and 80s, regular remakes were largely low budget TV movies or series, but the 90s brought a resurgence of interest in the author, with both the popular BBC adaptation of Pride and Prejudice and movie hit, Sense and Sensibility, penned by Emma Thompson. 1995 was a good year for Austen fans and brought Jane’s work to a whole new generation.

Since then we’ve seen modern takes on the novels, such as Bridget Jones’s Diary (2001) and Clueless (1995); sequels, prequels or homages like Death Comes to Pemberley (2013) and Pride and Prejudice and Zombies (2016); and films about Jane’s life, like Becoming Jane (2007) and Miss Austen Regrets (2007). It’s testament to the timelessness of Austen’s work that public appetite is endless. And I haven’t even touched on theatre and musical productions, of which there have been many. There’s even a feature film of Sanditon, Jane’s final unfinished novel, in production, though it seems to have stalled at the time of writing. 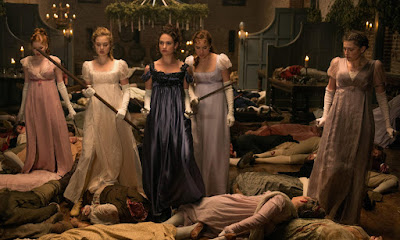 Jane Austen means different things to different people. I go back to both the books and the adaptations like an old comfort blanket, but it’s not just nostalgia or escapism; every time, and at different stages of my own life, I’ve found new understanding and significance beneath the romantic veneer. So, in honour of the lady herself, here are a few of my personal favourites…

Well, it had to be, didn’t it?! This version rightly deserves its place on just about every ‘best costume drama’ list you’ll find. OK, so the acting is overwrought in places, and some of the characters are a bit clichéd, but this classic, with Colin Firth as Darcy and Jennifer Ehle as Elizabeth Bennett, holds its head high above any other adaptation. There’s a respectable BBC version from 1980, and the 2005 film is not totally without merit, but Firth’s lake swimming scene remains a defining pop-culture moment that turned a whole generation on to Austen.

Emma Thompson won her second Oscar for the screenplay of this 1995 movie version of Sense and Sensibility. It was a labour of love and the result is pitch perfect. Sumptuous visuals and star turns from Kate Winslet, Alan Rickman and others make this a must-see. Funny, moving, warm and witty, it captures the spirit and the underlying message of the novel. Thompson’s Screenplay and Diaries offer an entertaining insight into the making of the film and are great addition for superfans. 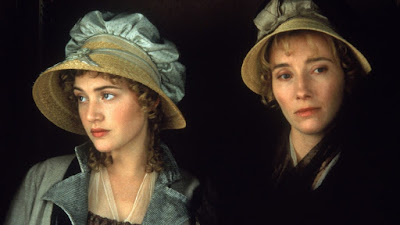 It’s a toss up between this version and the 2009 BBC version scripted by Sandy Welch and staring Jonny Lee Miller and Romola Garai. Both are very good, but I think I prefer the portrayal that Kate Beckinsale gives of Austen’s misguided heroine. The 1996 Gwyneth Paltrow vehicle was entertaining enough, but a bit too treacly for me.

Penned by Andrew Davies (who also wrote the 1995 version of Pride and Prejudice), this high quality adaptation comes a very close second to the movie mentioned above. It’s quieter, subtler and closer to the book. It looks beautiful and the performances are excellent, especially from Hattie Morahan as Elinor, who apparently refused to watch Emma Thompson’s earlier portrayal for fear it would influence her too much. I think it’s fair to say that David Morrissey as Colonel Brandon, good though he is, can’t hold a candle to Rickman. 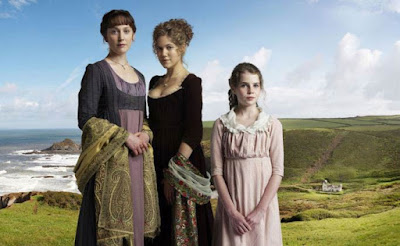 Not a traditional take but a brilliant one. Transporting the plot of Emma to a group of moneyed teenagers in Beverley Hills in the 1990’s was a stroke of genius by director and writer Amy Heckerling. The cultural references might be of its time but, just like Austen's novels, it's smart, witty and satirical, and has well-deserved cult status. I like to think Jane would have approved.

A recent addition but one I enjoyed very much, down to a razor-sharp script, gorgeous production design and a great performance by Kate Beckinsale. As Lady Susan, she of Austen’s often overlooked epistolary novel, Beckinsale delivers an anti-heroine with wonderful complexity and screen magnetism. Director, Whit Stillman, published an accompanying novelisation of the story (a brave move?) entitled Love &Friendship: In Which Jane Austen's Lady Susan Vernon is Entirely Vindicated. A great example of how Austen’s work continues to be reimagined. 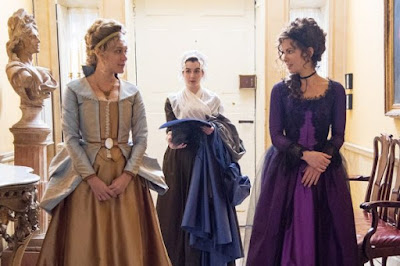 To my mind we are still waiting for a really good adaptation of Persuasion but this version starring Amanda Root and Ciàran Hinds is the best to date. This originally aired on BBC Two in 1995 – what a year that was for Austen adaptations! The global success of Sense and Sensibility increased interest in all things Austen, and Persuasion was given a cinema release in the US and won several Baftas. This adaption leans heavily on the central performances, which I like for their realism and subtlety. 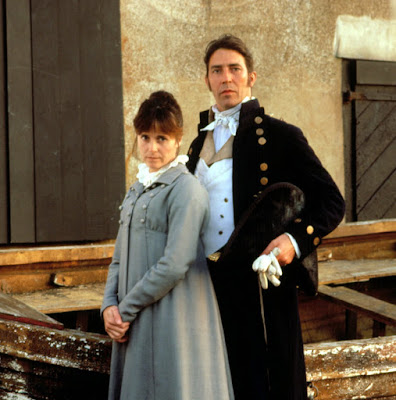 So there you have it. Which are your favourites?

A final note: This is my last post for History Girls as, due to other commitments, I must regretfully step down. Thanks to everyone who has read and commented on my posts and to my fellow History Girls: It’s been fun but, to paraphrase Mr Bennett, I have delighted you long enough!

Bonne route, as we say over here, Katherine. I hope all your future projects are successful. Carol x

The Amanda Root / Ciaran Hinds Persuasion is one of my favourites. I think it is very faithful to the book and that the leads are both fantastic.
Also the P&P series - it benefited from having the luxury of time, so it could follow the plot without having to try to compress everything to feature film length.
Elizabeth's smack down of Mr Darcy is a thing of joy which I can watch over and over!

Thank you for this excellent gathering of film memories, Katharine, and all good wishes for the future.

Persuasion has and will always be my favorite Austin. I thought the Hinds/root version was brilliant, all wistful and brooding. Thompsons s&s runs a close second, though I always wondered how Maryanne could go for worthless Wentworth when the quietly yummy Colonel Brad on was there. The 95 tv version of p&p was sumptuous. Though, ironically, I always wanted to know more of Elizas father than the dueling couple. Casting Donald Sutherland as her much aggrivated dad was a stroke of brilliance. I've had a crush on that man since he showed us a little tush in animal house. Then there's the 2007 version of Mansfield park with Billie Piper as Fanny which I though was very good. The book to me was always a dredful slog and this version made the story move along. There was some tush shown but the I'm a dredful American so what do I know?😊

Lovely to be reminded of all these! Good luck, Katherine.

Oops! My comment was meant to be a reply!

My favourite was definitely P&P with Colin Firth and Jennifer Ehle. I was lucky enough to hear Andrew Davies speak at the Melbourne Writers Festival one year, and I got him to sign my DVD cover. ;-) Nice to know he has done more Austen since then.

Has anyone seen Lost In Austen? It's not everyone's favourite, but I enjoyed it very much. And the scene where the heroine, Amanda, asks Darcy to please, please re-enact the lake scene from the Colin Firth version was a hoot! Not to mention borrowing Elizabeth Bennet's mobile phone. There was an interesting twist on Mr Wickham, who turned out not to be as bad as in the novel...

If you like Dr Who, Alex Kingston aka River Song, played Mrs Bennet.

I loved the 1995 Persuasion, though I was irritated by the alteration of the William Elliot strand, having him being in debt and so on. It made nonsense of the story; why would he want to marry Anne when he must know that Sir Walter himself is in debt? What's wrong with Jane Austen's version?!

I'm going to put a vote in here for Bride and Prejudice - Bollywood meets Austen, still comes out at Christmas!

My absolute fave Austen film adaptation is one nobody mentioned. The Joe Wright PRIDE & PREJUDICE with Keira Knightley and Matthew Macfadyen. I saw it four times in the cinema and it was my best film of 2005. The film-making was superb. Five scenes in particular: 1. When Jane arrives at the Bingley's and the door opens and we just see her sneeze. A whole chapter of exposition captured in a single moment. 2. When Elizabeth is on the swing and we see the passing of seasons as she twirls. SO clever. 3. The scene when Darcy confesses his love for Elizabeth in the rain. Women in the audience almost swooned. 4. The scene where Lizzy sees the sunlight through leaves on her closed eyelids. Unique! 5. The final scene in the summer dawn with Darcy coming through the early morning mist and their declaration of love. Bliss!

Fab article Katherine, as always. All the best on your new endeavors!

Loved the Hinds/Root Persuasion. I think the best, though Sense and Sensibility with Thompson is brilliant, and I adored the BBC P&P. My father always raved about the Olivier/Garson film, but I hated the costumes and the liberties it took with the plot.