Sunbeams in a bottle – Michelle Lovric 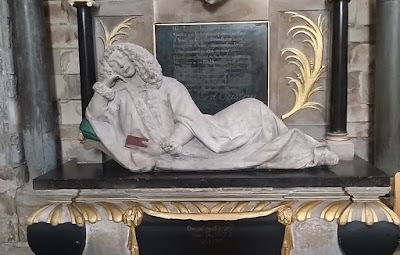 My local celebrity seems a cheerful chap, even in death. This is Lionel Lockyer’s grandiose tomb and effigy in the north transept of Southwark Cathedral near my home in London. 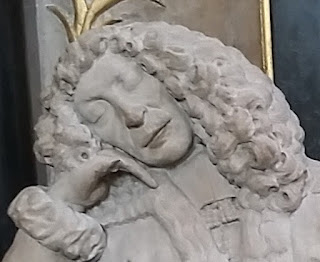 The Cathedral has been in the news lately, for sad reasons. It had hosted the funeral of Keith Palmer just days before the nearby Borough Market was targeted for another terrorist attack. The whole area became a crime scene, with the cathedral sealed off within the police cordon.

Elegant and grand as Southwark Cathedral is, it’s difficult to remember that the building was promoted to cathedral status only at the beginning of the last century. Before that, it was been variously known as the church of Saint Saviours and Saint Mary Overie, named after a local ferryman’s daughter, as legend has it, and the small dock that survives at the end of Clink Street near London Bridge. The survival of that dock is now under threat of a £5 million development that wishes to wall it up, with the replica Golden Hinde floating inside like a rubber duck in a bath. But that’s another battle and another blog for another day. This one’s about a famous quack of this parish and his particular wonder-drug.

When Lionel Lockyer was consigned to this tomb in 1672, the church was still Saint Mary Overie. Perhaps his effigy’s smile can be attributed to the amazing effect of his ‘miracle pills’ that failed their inventor only at the ripe old age of seventy-something. These pills, like all quack medications, claimed to be able to cure absolutely everything from gout to scurvy to syphilis to rickets to infertility to gout. And, like all quack medicines, they boasted a special ingredient – in this case, sunbeams. These solar ingredients were essential, the quack claimed, ‘dispelling of those causes in our Bodies, which continued, would not only darken the Lustre, but extinguish the Light of Our Microcosmical Sun.’

The pills were sold in boxes stamped with Lockyer’s coat of arms. They retailed at a hefty four shillings a box, and were available from some forty London establishments, including ‘Mrs. Harfords at the Bible in Heart in Little Britain, Mr. Russel’s in Mugwel Street near Cripple Gate, Mr. Randal’s at the Three Pigeons, beyond St. Clements Church, in the Strand, Thomas Virgoes, cutler, upper end of New Fish Street and Mr. Brugis, printer, next door to Red Lyon Inn, in Newstreet near Fetter Lane.’

Apart from sunbeams, the pills’ ingredients were a sworn secret. Lockyer claimed to have shared his recipe with only three trusted men. 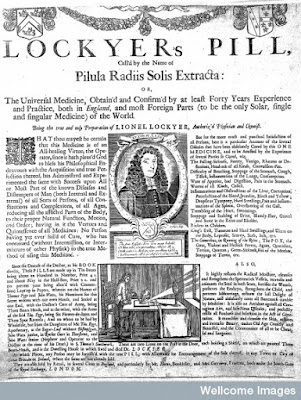 Some time around 1650, Lionel Lockyer began to print handbills about his Pillulae Radiis Solis Extractae. These quickly became known as Lockyer’s Pills, perhaps because that title was far easier to pronounce.

He was happier to say what was not in the drug, promoted as ‘a gentle remedy for all ailments in all persons regardless of sex, age, and constitution’: it was apparently free of harmful chemicals like mercury or sulphur of antimony. Thus it made a claim for itself as an early champion of the ‘wellness industry’ – even for the healthy it served as a ‘preservative against all accidents as contagious aires, for which it stands Centinel in the body and not permitting any enemy of nature to enter.’

Case studies and testimonials to this effect were abundant and graphic. Among the 74 cases he relates: ‘Mrs. Dixon suffered for two years at least with a griping, gnawing pain in the belly, and by the use of my Pills, and God's blessing upon it, was cured; For before she had taken of my Pills six times she had a live worm come from her by Siege, four yards long; the woman lives in Dead-man's Place in Southwark, near unto the Colledge Gate. Her age is about thirty-two years, the worm came from her the latter end of May, 1662. If any desire to see the worm I have it by me’.

Lockyer cited the case of a young man who ‘told a friend of mine, that he had the POX, who gave him two boxes of pills, and in three weeks time he was perfectly cured, although he scared went to bed sober all that time, and within three weeks time he married a wife and both of them very well to this day.’

Then there was James Carr, afflicted with nose cancer and failed by numerous physicians and surgeons. Two boxes of Lockyer’s pills and Carr was cured.

Indeed, Lockyer continued, if army and navy physicians and surgeons had given his pill to their patients, they would have saved tens of thousands of lives.

But Lockyer’s legend was not safe in his own advertising. A rival apothecary expended considerable bile and expense in a campaign against him. William Johnson sought to debunk the whole sunbeam story, saying that he analysed the pills and found them rich in the dreaded antimony. The exact same medicine, he said, could be had for 3 pence an ounce, compared to the 16 shillings Lockyer charged. He demanded that Lockyer should ‘either confess himself ignorant, or a Notorious Lyer in Print.’

Lockyer claimed to have a royal customer, adding a letter from a ‘Person of Quality’ who claimed that on June 13 1664 Lockyer calcined the powder of his pill in front of King Charles. 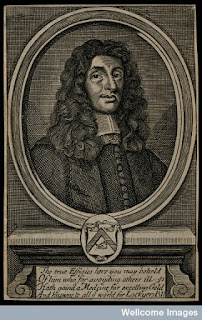 This letter seems to have provoked an American apothecary named George Starkey (quack-title ‘Eireneaus Philalethes’). His response described Lockyer’s Pills as ‘A smart Scourge for a silly, sawcy Fool’. Starkey threw mud at Lockyer’s credentials, describing him as a former tailor and a butcher. He too described the precursor of the sunbeam pills (christened ‘mercurialis vitae' by Lockyer) as ‘a very common and churlish medicine’ consisting principally of salt of antimony dyed bright red with cochineal.

Starkey even took exception to Lockyer’s quackish deployment of Latin, saying that he deserved to be untrussed and beaten bloody for his lapses.

Lockyer appears to have responded with yet more testimonials and handbills. It is thought he may have distributed upwards of
200,000 copies. And it served him well – his estate, on death, was revealed at more than £1900 in cash, plus a quarter share in a shop and leaseholds of four buildings.

His will provided for a substantial donation to charity as well as a sumptuous funeral for himself, and the Saint Mary Overie effigy resplendent in a fine wig of bouffant curls and a fur-trimmed robe.

Quack medicine is all about the advertising, which, in this case, continued even after the Lockyer’s decease. The brand-friendly epitaph reads:

A diminution 'tis to write in verse

His virtues & his PILLS are soe well known..

But they'll surviue his dust and not expire

Till all things else at th'universall fire.

This verse is lost, his PILL Embalmes him safe

To future times without an Epitaph.

And indeed the pills survived their originator. One James Granger reported seeing Lockyer’s Pills still for sale by Newbury the Bookseller in St Pauls Churchyard one hundred and fifty years later, in 1824.

Michelle Lovric is the co-writer of  My Sister Milly by Gemma Dowler, published on June 29th by Michael Joseph, an imprint of Penguin Books

Definitely a quack! And one who succeeded in his goals, from what you say. Well, there are plenty of con artists even today, eh? :-) Such as those who make a fortune on bestselling self-help and diet books.

The Laws Of Magic - Steampunk Rules!

Nothing changes in the world of quackery. Because it works. And it makes money. We all consider ourselves perfectable or at least refinable. So we are the natural prey of the quack.