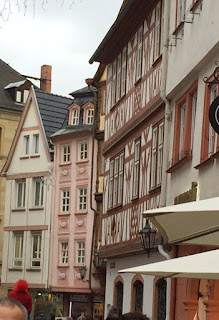 Here is a view of the Old Town in Mainz, which I visted in November. There wasn't any snow, but I did feel as if I'd been transported into my favourite Advent Calendar from childhood. It came from Germany, as all our Advent Calendars did, and it featured just such a picturesque old German town, but in the snow, with people buying presents and Christmas trees and pulling them home on sledges, and bakers' shops selling Christmas goodies. We used to keep Advent Calendars and re-use them, and I did so love that one, mending its doors with sellotape when they began to come away. The problem was that the doors didn't keep shut after a while, for all my pushing them and getting annoyed with them. 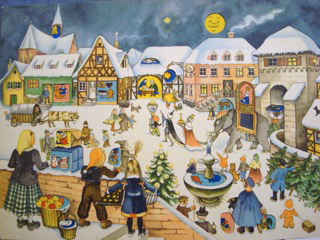 This Advent Calendar, by Marianne Schneegans, is from the 1940s, but it gives the general idea. There is something Breughel-esque about the scene, which is probably not by chance, when I think about it.
So I thought I would open a door on an Advent Calendar for you, and find a picture of myself, at the age when I was opening Advent Calendars and yearning for Christmas to come soon - as opposed to adulthood, when one counts the days and hopes for more time.. 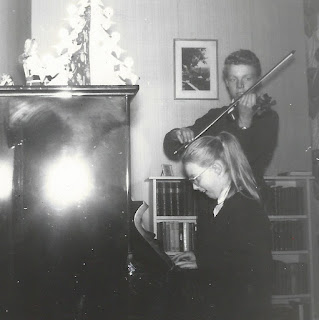 What I find inside the door is not an orange, or a Christmas tree, or a picture of a present, but my childhood self at age 10, playing the piano on Christmas Eve in Kendal, and concentrating hard (for I'd only just started lessons), while my brother, who was and is far more musical than I am, played violin. On top of the piano you can see another Advent Calendar, shaped like a Christmas tree, which also came out every year.

That was 1962; the Berlin Wall had been built eighteen months earlier (I remember that, and the shock in our household), and John Kennedy was still alive, though it wasn't till June the following year that he visited the city and announced that he was 'ein Berliner.' The Berliners were more than pleased with his support, but characteristically amused that he'd announced that he was a doughnut. He would be assassinated in November the following year, something I also remember, though I have no idea where I was when I heard about it. I can remember the pictures in the paper, that's all, and looking at them as the papers lay on the sitting room floor. What I do have a vivid picture of in my mind is myself standing in the garden of my school, and another girl coming up to me and saying: 'We're waiting for the Americans to send their rockets to Russia, and the Russian rockets to come back, and that will be the end of the world.' That was the Cuban missile crisis, in October of that year. I knew about the bomb, and approved of the Aldermaston marches. I had even got hold of a CND badge from a young man in the youth club my parents ran at the YMCA.

I had gone to grammar school at just 10, something for which I was academically, but not emotionally ready. Quite a lot of my classmates were almost 12. The other girls asked me if I liked Cliff or Elvis, and I said 'neither', so they told me I was 'square.' I still don't like either, and at Christmas 1962 I didn't yet know that salvation from squareness was at hand. The Beatles had released 'Love Me Do', also in October, and I was going to really like the Beatles. I still do.

What were we playing that night? Probably 'Stille Nacht,' the haunting carol composed by Joseph Mohr, which for me epitomises Christmas. In my childish head, the beautiful simplicity of that melody rang out through a snowy mountain landscape, not in flat pre-Alpine Oberndorf, where it was first sung. 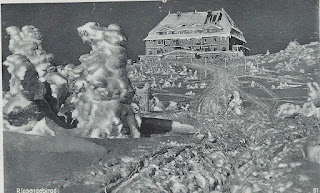 My mother was born in Silesia, and she told me about spending Christmas in Giersdorf, now Podgorzyn, in the Riesengebirge/Karkonosce/Krkonosce mountains where my great-grandfather lived, where in winter the snow came up to the first floor windows and a tunnel had to be dug through it to get into the front door. So here is an Advent Calendar door in advance for Christmas Eve, with this 1930s postcard of a mountain hut now on the Czech side of the mountains (I had hot chocolate there a few years ago, in summer), and the snow making the trees into meringues. My great-grandfather did have to pull the Christmas tree back on a sledge. It must have taken quite a while to get the snow off it, mind, and it was decorated with handmade straw ornaments, my mother told me. On Christmas Eve there was carp (the area is full of carp ponds from old monasteries), and they'd have the bread and milk and ground poppyseed pudding which we shall eat tomorrow night, which is peculiar to that part of the world.


WISHING ALL HISTORY GIRLS READERS A BLESSED HOLIDAY AND A PEACEFUL NEW YEAR.
Posted by Leslie Wilson at 01:00

This is lovely post, Lesley. Hope you had a good Christmas.

Lovely, thanks! Treasure the memory of little Thomas, eighteen months old, carrying out presents with his sister. Some of them got to the right person.