Rome Saturnalia was THE most important Roman festival. Heavy on feasting, fun and gifts, it was originally celebrated in Ancient Rome for only a day around 17 December (today!), but it was so popular it expanded into a week or even longer, despite Augustus' efforts to reduce it to three days, and Caligula's, to five. Like today's Christmas, this holy day (feriae publicae) had a serious origin: to honour the god of sowing, Saturn. But also like modern Christmas, it was a festival day (dies festus). After sacrifice at the temple, there was a public banquet, which Livy says was introduced in 217 BC. Afterwards, according to the poet Macrobius, the celebrants shouted 'Io, Saturnalia' at a riotous feast in the temple.

Modern mid-winter habits echo Roman conspicuous eating and drinking, and visiting friends and giving gifts, particularly of wax candles (cerei), and earthenware figurines (sigillaria). Masters served meals to their slaves who were permitted the unaccustomed luxuries of leisure and gambling. A member of the familia (family plus slaves) was appointed Saturnalicius princeps, roughly equivalent to the Lord of Misrule.

The poet Catullus describes Saturnalia as 'the best of days' while Seneca complains that the 'whole mob has let itself go in pleasures'. Pliny the Younger writes that he retired to his room while the rest of the household celebrated. Sound familiar?

Macrobius described a banquet of pagan literary celebrities in Rome which classicists date to between 383 and 430 AD. So  Saturnalia was alive and well under Christian emperors, but no longer as an official religious holiday.

But alongside ran the Dies Natalis Solis Invicti (the birthday of the 'unconquerable sun'), a festival celebrating the renewal of light and the coming of the new year and which took place on 25 December. By the middle of the fourth century AD,  the dominant Christian religion had integrated the Dies Natalis into their celebration of Christmas. So it seems that Saturnalia wasn't the official ancestor of Christmas after all. Never mind.

In Roma Nova, Saturnalia is celebrated in much the same way. Here's a tale straight from the Mitela household in Roma Nova...

From the journal of Carina Mitela, Roma Nova, 17 December - Saturnalia

"Thirty-six hours later, we were snowed in. The newsies were having a field day with their graphs and charts. The ploughs and tractors were out soon enough despite it being an official holiday and were attempting to keep the main city roads cleared.

Although most of the public Saturnalia celebrations were cancelled, the priests would make the usual grand sacrifice and invoke Saturn’s blessings. I pitied them today; it was a Greek rite and they’d have to shiver in sleeveless fringed tunics, with heads bare instead of a warm woollen toga snuggly folded over the head. It was a sure bet they’d turn up the heating in the Temple of Saturn and have every open brazier burning hard.

My husband, Conrad, and our youngest daughter, Tonia, sat in silence at breakfast. Our eldest, Allegra, had called first thing to say she would join us just after two when she finished her shift. She looked tired on the screen; hopefully she’d get some sleep before tomorrow. She’d been called in with the rest of the military to help ensure vital services were kept running.

‘I’ll be there, Mama, as long as there are no further disturbances in the city.’

‘What do you mean “disturbances”?’

‘Unfortunately,’ she said in the driest tone I’d ever heard her use, ‘some people seem to think the custodes concentrating on the bad weather crisis means they can help themselves to what’s in the shops. I’ve been freezing my, er, extremities off in the Macellum district all night. We came across some kids with a crowbar in front of a smashed window, pulling stuff out of an electrical goods shop. The alarm was going, but so were others. As soon as they saw us, though, they ran like the Furies were after them.’ She chuckled.

The sight of half a dozen Praetorians marching towards you with intent and attitude would make anybody run.

‘But they’ve opened the basilica for the public banquet. My oppo, Sergilia, has caught guard duty there,’ she added, making a face. The law court hall was huge and could accommodate up to a thousand. But good luck to those trying to keep order.

After checking last details with the steward for the celebration meal later, I retreated to my office for an hour to check my messages and that nobody had found my stash of gifts for the 23rd. Sigillaria was important not just for the kids who loved new toys, but when adults gave each other something to compensate for the excesses that would surely happen today.

Normally on Saturnalia morning, my cousin Helena and I would sip a glass of champagne and exchange jokes and snippets of gossip. She had more than a finger on the pulse of city life; its lifeblood ran through her. She’d also forewarn me about any particularly risqué activities the household were planning for today.

Ceding my place at the head of the Mitela tribe for a day to the princeps Saturnalicius was all well and good, but even misrule and chaos had its limit as far as I was concerned. But for a few hours, the house would be overrun with noise, people, stupid but fun dares, overeating, games, theatricals and stand-up of dubious taste, arguments, falling in lust, laughter and progressive drunkenness. Helena would make sure the children were safe out of the way when the horseplay became a little too raunchy.

By early afternoon the atrium blazed with light. Everywhere was covered in ferns, spruce and pine. In the centre was a large square table covered with linen, silverware, glasses, candles and the best china. I smelt roast pork, lemons and spices. In tune with the reversal of the day Junia, the steward, was enthroned in my usual place. Conrad handed me a glass of champagne. He was on waiter duty. His Saturnalia tunic was bright orange. He shrugged. Then grinned. Wearing over-colourful clothes was traditional, but a strain on the eyes.

Our thirteen-year-old son had been staying in the country with Conrad’s cousin and was caught in the atrocious weather. We’d be lucky to see him before Sigillaria. Gil loved the madness of Saturnalia. My geeky son would turn into a shiny-eyed imp of mischief, darting around, laughing and joking, pulling pranks I didn’t know he knew. Now he’d be holed up with Conrad’s serious cousin for days. I only hoped they had enough food and the electricity hadn’t been cut, like the phone.

‘Well, Tonia’s having fun.’ Conrad pointed to her skipping between people with trays of hors d’oeuvres, watched anxiously by the steward’s son, and me. I could see at least one of the trays coming to grief, contents slithering across the marble floor.

I blinked at the hearty shout from the household and guests gathered around and raised my glass, then bowed towards the steward. She went to speak, but a blast of cold air and a loud thud interrupted her. All heads turned towards the atrium doors, now open. Allegra, in her military fatigues and winter parka, cheeks burning with the indoor heat, tore off her field cap and shouted, ‘Io Saturnalia’.

Everybody shouted back, the noise filling the atrium. I hugged her to me, ignoring the cold and wet of her thick coat.

‘I’ve brought you something else, Mama,’ she whispered in my ear and nodded towards the double doors. On the threshold stood a lanky boy – pale, shivering and wide-eyed. He was enveloped in a survival blanket.

'I found him trudging through the city,’ Allegra said. ‘He’s walked the ten kilometres from Brancadorum to get here and –.’

But I didn’t hear the rest of what she said. I ran to the door and crushed him in my arms. 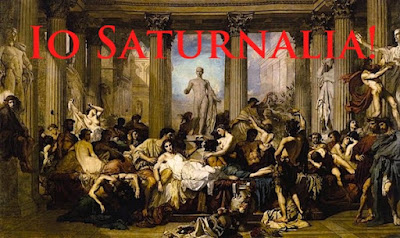