I recently went to Brussels (well, somebody needed to go and sort things out - really, there's no need to thank me...) - on a pre-Christmas visit to my son, his Polish partner and their family. I had a slightly protracted journey, meeting various delightful History Girls in London on the way, before heading for my favourite station, St Pancras, which always has such a buzz about it. There was a magnificent Christmas tree, covered in flowers, and as usual, someone was playing one of the two pianos. It's the gateway to the continent: it's exciting. 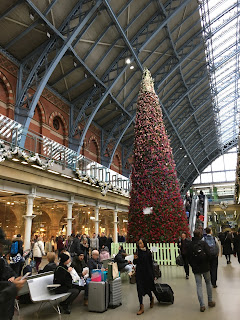 When I got to the Gare du Midi in Brussels, I called in at my favourite chocolate shop, Leonidas. As I waited in the queue, I saw little chocolate figures, which looked rather like chessmen. Not long afterwards, I was meeting my two grandsons, each of whom was clutching a bag with similar figures in it: 6th December was St Nicholas's Day, they reminded me, and the great man had been into school bearing gifts. So not chessmen at all! 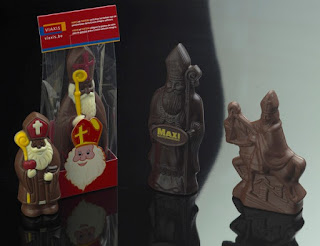 At the weekend, there was a party for several of the Polish families who live near my son. Everyone took seasonal food - barszcz (beetroot soup) with pierogi (dumplings stuffed with mushrooms), a gorgeous potato salad with herring and gherkins, and lots of cake - my favourite was a ginger one, with plum jam in the middle and melted chocolate on top. There may even have been some bison vodka, taken with apple juice and ice.

And guess who popped in? Yes, St Nicholas himself, looking remarkably like Santa Claus, and bearing gifts for the children. I guess 'Santa Claus' derives from 'Sankt Niklaus' or something similar. 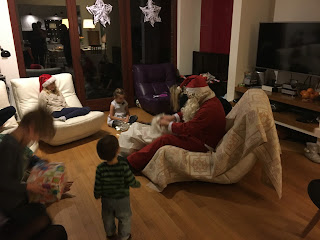 Curious to find out more about this generous saint, I looked him up. He was born in Asia Minor in a town called Patara (in modern day Turkey) towards the end of the third century. He became a priest and eventually the Bishop of Myra, and was imprisoned at one time by the Romans, during Diocletian's persecution of the Christians. He seems to have been a brave and kindly man, who stood up for those who couldn't defend themselves, and championed the poor, sailors, and children. The most well-known story about him is probably this one.

One day - perhaps even in December - he heard about a very poor man who had three daughters. At that time, a bride needed to have a dowry, and this man had no money to provide one for any of his girls; nor did he have sons who could have helped him out. Such was the poverty in which they were living that he felt his only choice was to sell them into slavery. 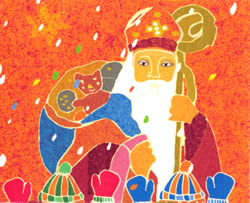 Stephen had inherited money from his parents, who died when he was young. When he heard of the plight of this family, he filled a bag with gold, and dropped it down the chimney of their hut. (No, I don't know how he got onto the roof. Maybe the houses all had flat roofs, and it was a regular pastime to stroll across them.) It fell into a stocking which the eldest daughter had hung up to dry by the fire. He repeated the performance for the other two daughters. On the third occasion, the father caught sight of him. Stephen asked him not to tell anyone - but clearly, either he or one of his daughters couldn't resist, and the tale soon spread.

It's a lovely tradition, I think. I'm glad I was there on the 6th December.

We always had St Nikolaus, even in England, on 6th December. I only saw him once, when my mother found a Father Christmas costume and walked past the sitting room window in it, when I was 4. We put out our shoes and he filled them with a mandarin, Lebkuchen, chocolate and nuts. My friends were envious but they had more sweets year round than I was allowed.. to the benefit of my teeth. He was accompanied by the Gramperl, a scary creature with horns who’d only leave you coal if you’d been bad. When I spent the first term of my 6th form year in Germany both Nikolaus and Gramperl attended the house. At Christmas, the Christ Child brought the presents under the tree on Christmas Eve but when we were small Father Christmas attended and left all our presents in pillowcases at the foot of our bed. Later we did Christmas Eve presents with the grownups. My children had Nikolaus and this year after one set of grandchildren and their mother came to live near us I was Nikolaus for them. Amazing what you can get into small shoes. And yes, Santa Claus is St Nikolaus - Klaus is a common abbreviation of Nikolaus. Lovely Christmassy blog!

Sue, I'm very glad to hear you've gone to Brussels to sort things out, in betwee Christmas parties! You'll definately do a better job than the numpty doughnuts our government keeps sending out there!
The Niklaus story is very puzzling, isn't it? Not only, how did he get on to the roof -- but how did he drop a present down a chimney which probably wouldn't have existed at the time? It would have been a smoke-hole in the roof. And these presents he dropped -- how did they end up in the stockings hanging up to dry beside the fire, and not in the fire? -- But a lovely story.

Yes, Sue, there are definitely one or two plot holes. And as I was retelling the story, I thought, what kind of a father even thinks of selling his daughters into slavery, no matter how poor they are? Leslie - it sounds as if you had the best of both traditions!

St Stephen sounds like a lovely guy, and the tradition does too!

Actually, in the story I know, he put them in through a window.

As with most folk tales, there seem to be a number of variations.