When You've Been Naughty not Nice: The Legend of Krampus by Catherine Hokin 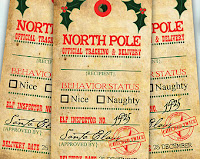 You'd better watch out, you'd better beware - three days to go and all over the country the familiar Christmas game of blackmailing the kids is reaching its peak, whipping Santa's swingometer into a frenzy to rival a BBC election night. But what if the little darlings in your house have you outnumbered and you've already drunk every drop of Santa's sherry? Don't worry, there's still time to up your game and, in the spirit of embracing all things European while we still can, introduce a new twist to the festive season. Forget jolly old Father Christmas and threaten them with Krampus.

Across Austria and much of Germany, no Christmas celebrations are complete without Krampus, a satanic goat-like figure sporting horns, a lolling red tongue and a bundle of sticks to swat naughty children with. Like Santa, Krampus carries a sack but his is more of a collection than a delivery system. Rather like two old friends who've chosen very different paths since university days, Santa and Krampus meet up once a year on the 5th of December, the eve of Saint Nicholas Day looking out for shoes or boots left outside their houses by hopeful/terrified children. Santa carries candy and coins, Krampus has his twigs - find one of those in your shoe and it's a yawning sack not a pile of presents that awaits. Krampus has been a fixture of cards in Austria since the 1800s and an article about the tradition written in the 1950s noted that many households liked to keep a bunch of gold-painted birch twigs on the wall throughout the year as a gentle reminder. I can see it would focus the mind.

It's likely that the Krampus figure, who is often portrayed with one cloven and one scaly human foot, dates from a far earlier period than the St Nick stories. His name comes from the German word krampen which means claw and the traditional view is that he is the son of Hel the Norse god of the underworld. The Catholic church tried to ban him in the twelfth century for his similarity to popular depictions of the Devil as did the fascist
Christian Social Party in the
1930s but Krampus survived and is currently having a bit of a resurgence. If your little ones still aren't listening, how about a family fun day outing to a Krampus parade? The number of these parades is booming, tying the Krampus legend up with another pagan festival, perchten, where mythical creatures gather in January or at Lent to drive winter away. Some of them are on a huge scale - one of Austria's biggest (in Schladming south of Salzberg), involves 800 monsters and attracts over 8000 spectators. Krampus parades and parties have spread to the US and he's even popped up at Glasgow's Christmas market this year with a rather fancy array of masks on offer if you can't get that smoky party-eye look quite nailed. However you celebrate this year, enjoy it but don't forget to leave a couple of twigs in any miscreant's shoes tonight, you might just buy yourself a very peaceful few days... 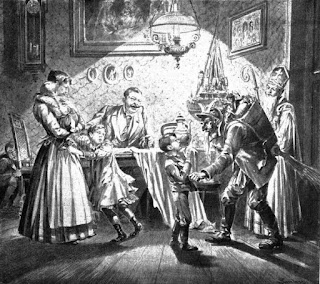 Lovely blog! The Krampus, or Gramperl as he is in Bavaria, was never particularly scary for my brother and me. We knew he went round with St Nikolaus, but we soon realised that however bad we were, St Nik would fill our shoes with goodies and the coal we were threatened with never appeared. I would love to see some of the processions, though; our German/English Christmases were always spent in England. I did see a Gramperl when I spent a term in Traunstein, Upper Bavaria, in the 6th form, but we weren't taken to see anything like that. Perhaps they were less prevalent in the 60s, but we saw paintings and photographs of Krampuses in the folk museum in Berchtesgaden this summer, from the 19th century and before. I think there was a Krampus costume, even. My brother and I did enjoy playing games involving the Krampus, though. I think they involved a lot of running round and shrieking..
In the Netherlands, I gather this year, his incarnation as Black Peter, involving blacking up, has caused offence, and I'm glad that the Krampus is more of an obvious nature spirit.

It was definitely coal, not twigs, we were told might appear in our shoes. Perhaps that's a Silesian thing? I do know about the besom he'd use, mind. We weren't told he'd take us away, either..But there must be different versions in different parts of Germany/Austria, or maybe my parents, who didn't believe in Hell, softened it for us. Can't ask them now, they're dead.