An Historical Enigma: The Real Grace Marks and Alias Grace - by Anna Mazzola

In the 1960s, Margaret Atwood read a book called Life in the Clearings Versus the Bush, a 19th century account of pioneer life by Susanna Moodie, an English emigrant to Canada. A chapter of the book is devoted to the Provincial Lunatic Asylum in Toronto, and to Moodie’s visit to the violent ward to meet the ‘celebrated murderess Grace Marks’. 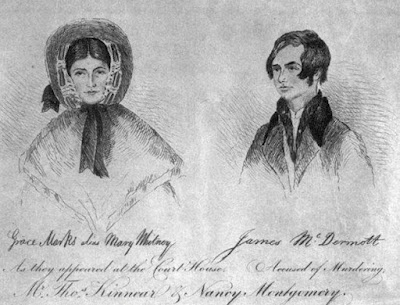 Grace Marks was a Canadian maid who in 1843, when only 16, was convicted with fellow servant James McDermott of murdering their master, Thomas Kinnear, and his housekeeper-lover Nancy Montgomery. Kinnear had been shot in the left side of his chest. Nancy Montgomery was struck in the head with an axe and then strangled. A post mortem revealed that she had been pregnant.

The Trial of McDermott and Marks

The trial took place in November 1843 and was a great sensation, the newspapers covering the proceedings with appropriate levels of gore and sexual intrigue. On the day of McDermott’s evidence, so many spectators packed into the courtroom that ‘some alarm was created by a report that the floor of the courtroom was giving way’ and a rush was made for the door. 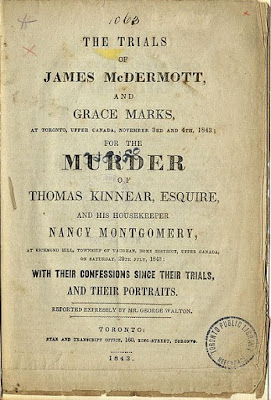 During the proceedings, Marks and McDermott blamed each other for instigating the murders. They were both convicted of Kinnear’s death, but only McDermott was ultimately hanged. Before he went to the scaffold, McDermott insisted that Grace had strangled Nancy Montgomery herself with a piece of white cloth.

There was much discussion at the time as to whether Grace Marks was in fact guilty. She is said to have displayed little emotion during the trial and, according to newspaper reports, arrived at court wearing clothes that she had stolen from the dead Nancy Montgomery. However, some believed she was innocent, the victim of McDermott’s lies. Others believed she was insane.

She gave three conflicting accounts of the murder, while McDermott gave two. In Marks’ last confession, published in the Star and Transcript, she said that after Montgomery had fired McDermott, he had determined to kill her and Kinnear. ‘He had made me promise to assist him,’ Marks said, ‘and I agreed to do so.’ Marks claimed that she had tried to run away from the house after Kinnear was killed, and that McDermott had tried to shoot her.

It’s not clear why Marks was sent to the lunatic asylum. It was suggested variously that she was possessed by the consciousness of her dead friend, Mary Whitney, or had some kind of personality disorder. Another theory was that Marks had in fact died and that Mary Whitney had adopted her identity. According to Moodie, ‘the fearful hauntings of her brain have terminated in madness’. She described her as ‘lighted up with the fire of insanity and glowing with a hideous and fiend-like merriment.’ The asylum superintendent, however, believed that Grace Marks was faking.

In 1852, she was transferred back to Kingston Penitentiary (where the mini-series of Alias Grace was filmed). The records show she was suspected of having become pregnant during her time at the asylum. As Atwood points out in the afterword to Alias Grace, ‘the men with the easiest access to patients were the doctors’.

After almost thirty years in detention, Marks was pardoned and moved to New York State. After that, the paper trail runs out.

The Servant Girl to Alias Grace

Atwood would mull over Grace Marks for many years. In 1970, she published The Journals of Susanna Moodie, a cycle of poems. In 1974 she wrote the screenplay for the film The Servant Girl, also based on Susanna Moodie's account. In 1979 she wrote a version for the stage (Grace). However, by the time she wrote Alias Grace, Atwood had changed her opinion of Grace Marks, having read a variety of sources and realised that Moodie had entirely invented parts of her account. ‘Moodie said at the outset of her account that she was writing Grace Marks's story from memory, and as it turns out, her memory was no better than most.’

Atwood never reached a conclusion about Grace, noting that ‘the true character of the historical Grace Marks remains an enigma’.  Hence the subtly and slipperiness of the novel. In the afterword to Alias Grace, Atwood notes that although she stuck to the facts where facts existed, she ‘felt free to invent’ details to fill in the gaps between irreconcilable versions of the murders. 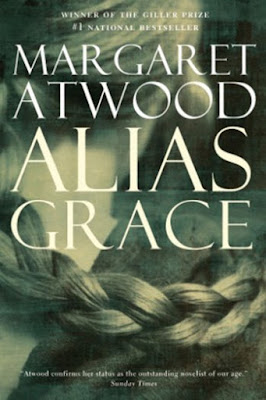 At an interview at the Southbank Centre in October, Atwood recounted how she had seen, in the Inspector's Minute Book, the liberation questionnaire that Grace had completed upon leaving Kingston Penitentiary (confirming she could write). One of the questions asked of all outgoing prisoners was, ‘What has been the general cause of your misfortunes, and what has been the immediate cause of the crime for which you have been sent to the Penitentiary?’

Marks’s reply is typically non-committal. It reads: ‘Having been employed in the same house with a villain.’