The Winter Solstice at Bru na Boinne by Penny Dolan


In four days time, on the 21st of December, it will be the annual Winter Solstice. On that morning, a remarkable event takes place at Bru na Boinne, a Neolithic site in County Meath in the Ancient East of Ireland and within sight of the Hill of Tara. This area holds an ancient group of tombs and monuments, constructed around 3,200 BC, and said to be older than the Great Pyramid at Giza or Stonehenge. 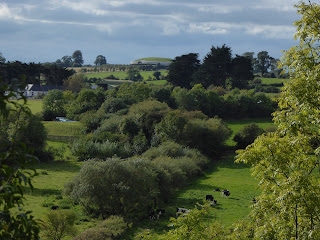 Each year, at midwinter, the Solstice sun shines into one particular tomb, the largest of several  grass-topped mounds. The beam of light enters through a cunning opening and reaches along the pitch-dark corridor, deep into the core of the passage tomb. There, for a few minutes, the light widens to shine around the cruciform space where the bones of the dead ancestors waited. Why these people needed to send news of the returning sun so deep into the place of the dead, and in this way, we can only imagine.

This annual alignment was, somehow, designed and constructed centuries ago but now, every year, a small group of lucky people wait within the deep darkness to witness the first Solstice light slide into the tomb themselves, while crowds gather outside on the grassy slopes, wishing they could be there in the darkness too.

However, ordinary visitors can experience a false dawn daily, standing within the burial mound as the tour guide turns off the torch. For a second, one feels a flicker of fear at being buried in the dark forever but then, as eyes adjust to the darkness, the thin thread of daylight appears again. Not a true Solstice, but still a memorable effect. How, one wonders, was this all planned and built and why? And who observed it, beyond the eyeless corpses?  Looking up, the roof of the central chamber is remarkably beautiful, comprising a series of flat stones laying one over the other in concentric circles. If one stone should shift, what then? 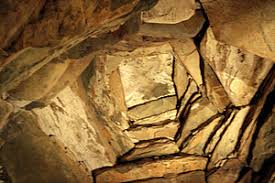 This major tomb or temple, as described above, wears a more recently historical name. This tomb is called New Grange, after one of the granges or store-houses built there by Cistercian monks in medieval times, who valued the wide and fertile valley of the once-navigable River Boyne.

This same fertility must have attracted the early people to the valley in Neolithic times, creating a community of farmers and traders settled and wealthy enough as a group to support the construction of these sacred monuments. Beyond that, we know little. Externally, the tomb doesn’t feel as magical as I might wish, because not long ago, the circular walls were re-faced with large, white imported stones of a kind found scattered around the site. Their crystalline quality, one theory suggested, enabled the great tomb to be brightly visible for miles around, an idea that appealed to the various funding bodies, although to me the bright cladding adds a strange rather than a magnificent quality.

Even so, at the entrance, one must feel impressed, noting the angled roof-box set above the main entrance to let in the midwinter light,  and the enormous boulder placed to guard the doorway. After all this ages, the huge stone still bears rolling, circling carvings that have become emblematic of Bru na Boinne. 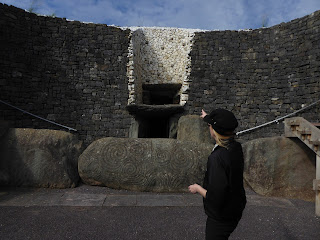 Similar carvings decorate the walls of the Knowth tombs nearby on the complex site, where one large grass-topped tomb is surrounded by several smaller mounds and evidence of henges and kist burials. The gigantic “kerbstones” set into the outer walls would have been, so the guide explained, specially chosen for their textures, soft colours and shapes. The surface of each stone inspired its own decoration, whether it is swirling and interwoven waves, circular “sun pattern” carvings or both or even an early sundial on a flat rock, each forming part of this ancient art gallery. 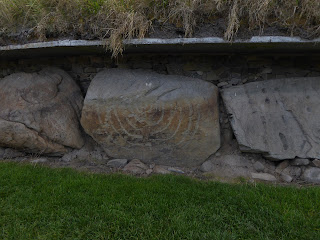 Meanwhile, inside the tomb at Knowth, a smaller and less crowded space than New Grange, there were a couple of chambers, and a chance to gaze down one simple passage, lit by lamps. I waited till all the others had gone and stood there awhile, taking in the more than magical atmosphere of this place. Then I hurried out into the warm, blessed sunlight again. 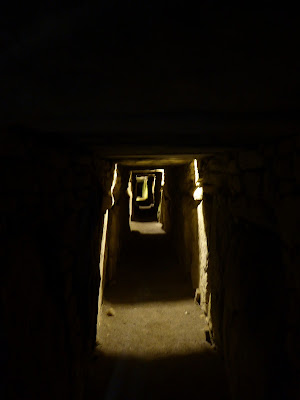 All good wishes for your own Winter Solstice celebrations and all your holiday festivals.

Lovely post. I really want to go there one year.

This is spine-tingling stuff - thanks, Penny!

I've always wanted to go there, ever since I first read about it, so many years ago. Thanks for this post and the wonderful photos, Penny.

Thanks, all. I had always longed to go there too and was really glad I had,although you have to take what I'd call a large dose of imagination with you, just because of the way they cope with the sheer numbers who visit. Though they do it well - by buses and timed parties with good tour leaders - and better than letting people wander and picnic about all over the sites, I feel.

I was also surprised by the number of people, even in Ireland, who had never heard of New Grange, when it's the equivalent, culturally, of an Irish "Stonehenge".

Fascinating post Penny. Just perfect for these dark days. That photograph in the passageway is superb.