One of the great delights of moving to a rural village is that many of the traditions which have died out in most towns are still maintained, such as carrying flaming tar barrels from pub to pub or getting up before dawn to dance around the Nine Maidens, an ancient stone circle on Dartmoor, having already climbed up freezing boggy hills in the biting wind. Neither custom is for the faint-hearted, but a slightly less strenuous tradition still observed in our village is Stir-up Sunday. This is the day the women of the community get together to make their Christmas puddings.

Stir-up Sunday is the last Sunday before advent, at the end of November. The name comes the Church of England Book of Common prayer of 1604, in which the Collect for that day begins -

'Stir up, we beseech thee, O Lord, the wills of thy faithful people; that they, plenteously bringing forth the fruit of good works, may of thee be plenteously rewarded …’

Children had their own version of this, for was a tradition for orphans or poor children to go from door to door on this day begging for a portion of the puddings with the song –

‘Stir up, we beseech thee, the pudding in the pot. And when we get home we shall eat the lot.’

On Stir- up Sunday all the women bring their ingredients into the church hall and prepare their puddings together, which would once have been a great way for older women to teach new brides the art of pudding making. Each stirrer may make a wish, but if it is to be granted, the puddings must be stirred clockwise in a circle from east to west, which is said to honour the journey the three Wise Men made to visit the infant Jesus.

But in fact, the custom of stirring any kind of food in a clockwise direction has its origins centuries before Christianity. Everything a woman did in the home or in the field had to be done sunwise or deiseil, because the sun was the source of all life. To walk round a building or perform any action in an anticlockwise direction – widdershins – was to work against the sun and strengthen the powers of darkness. It would certainly call down ill-fortune or worse.

There is a tradition in the British Royal Navy that the youngest sailor and the ship’s commander should both be called together to stir the ships Christmas pudding on Stir-up Sunday and that this should be done with a wooden oar or paddle, to symbolise the wooden manager in which the baby Jesus was laid.

The Christmas pudding may have evolved from a medieval dish known 'frumenty' made from cracked wheat, currents or other dried fruit and spices, boiled together with milk or almond-milk or meat stock. This could be served sweet or could have scraps of meat such as beef, mutton or venison added to make a kind of pottage. It was more like a thick soup or stew than a solid pudding. A version was eaten on the fast days before Christmas in preparation for the coming Christmas feast, when it would be made without meat. It was often a frugal way of using up scraps. In the Celtic Christian tradition it was eaten as part of the Christmas feast.

By the end of the 16th century a dish, known as 'plum porridge', consisting of raisins and spices boiled in fruit juices or meat-stock, thickened with breadcrumbs was served as the first course in the Christmas feast. It wasn’t until around 1670, that it became the familiar solid round pudding boiled in a bag, known as 'figgy pudding' or 'plum pudding', the plums being raisins. 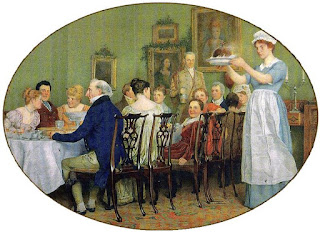 The custom of hiding objects in Christmas puddings also has medieval origins in the practise of baking a dried bean into a cake on Twelfth Night, a tradition which was recorded as early as the 1300’s. Who ever found the bean would be crowned king or queen of the final feast of Christmastide and would be able to command their ‘subjects’ to do whatever they wanted to amuse their ‘sovereign’, however bawdy or humiliating. But if the finder accidently split or broke the bean as they found it, they would be obliged to change into the clothing of the opposite sex for the feast. The man would be crowned queen for the night and the woman king.

In later centuries, silver coins were boiled inside the pudding, and if you found one in your slice, it was said you would be blessed with wealth and good fortune for the coming year. Silver, of course, was another one of those superstitions from pre-Christian times, when it was associated with the blessings of the moon. Silver was used to repel evil, demons and monsters. In later centuries this is why they thought some creatures could only be killed with a silver bullet. In certain seafaring communities, such as Hull on the east coast of England, if a trawler man found a silver sixpence in a Christmas pudding he’d carry it in his pocket on every fishing trip to prevent misfortune and ensure a good catch.

Christmas or yuletide was always a time when people would try to discover their fortunes for the coming year by watching how the yule log, a hazelnut or an apple pip burned. Another Christmas custom was to send a girl of marriageable age out to fetch wood from the stack at night in the dark. The next morning, she would count the number of sticks she had gathered. An even number meant she would wed within the year, an odd number that she must wait. And this tradition of Christmas fortune-telling continued with the Christmas pudding. By the Victorian era, in addition to the silver coin, charms were concealed inside the pudding which would foretell the finder’s future. If you received a Bachelor’s Button or an Old Maids Thimble, you’d remain single but be happy during the coming year, but if you found a ring, marriage within the year was certain. A silver wish-bone or horseshoe would bring you good luck and a miniature anchor would pull you into safe, calm waters.

In some areas, of Britain it was the tradition for each household to make 13 small puddings, the last, the Judas Pudding, had to be given to a beggar who must carry it away from the house, taking away any bad luck for the year. Another custom was to retain a small amount of Christmas pudding and add it to the following year’s mixture, so that the pudding was never finished. This ensured that the family would never go hungry. So, if you haven’t made your pudding yet – it’s time to stir up!
Posted by Karen Maitland at 00:30

If there's one thing I enjoy as much as history, it's ritual and this one tickled me to no end :-->

I just love this, I read about puddings in a book but this is much more detailed.