Wishing you a Traditional Christmas by Imogen Robertson

As all good History Girls know, 'traditional' is one of those words which is rather flexible in its exact meaning. We are all aware, after all, that Queen Victoria popularised the Christmas Tree and Santa didn't get sewn into his red suit until the 1930s. Then each family has its own traditions. I actually stamped my foot when my husband suggested we didn't really need to have forcemeat balls at Christmas dinner (little dumplings of suet and breadcrumbs, roasted until, when you try and put a fork through them, they fly off your plate like cannon balls) saying, as I stamped, it was 'traditional' to have them. I doubt anyone in my family would have minded if they hadn't made an appearance on the table,  but I've been making those things since 1980 and I'm damn well not going to stop now.

It's also traditional in my family's home that the Christmas Tree is topped out on Christmas Eve by the youngest person present. Now that sounds like a solid pagan good luckish sort of thing, until you add the detail the tree has to be crowned with a particular angel (c. 1972), with a somewhat startled expression and a head which tends to fall off mid-ceremony. I'm trying to claim the head thing is a homage to Gawain and the Green Knight to give it a good fourteenth century vibe, but no one believes me.

This year, I'm thinking we should bring in a new tradition of some sort to compliment the forcemeat balls and the angel. Perhaps forcing the kids to lock their phones and electronic devices into a box for an hour so Santa can check them for age inappropriate content might be a good one. 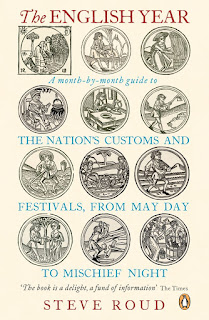 If that doesn't float your ritual boat however, you can find inspiration and a range of ideas for mumming, wrestling for a Boar's head, Yule logs and frumenty in Steve Roud's marvellous The English Year. It politely makes clear which 'traditions' are of more recent vintage - I'm looking at you Tom Smith, inventor of the cracker in 1847 - and which have a pretty good medieval pedigree. It also, of course, is a gift which keeps on giving, so you can spend the year putting on games of hurling for obscure Saints in March, wearing primroses for Disraeli in April and finding out where to get a St Bartholomew's day biscuit in August. 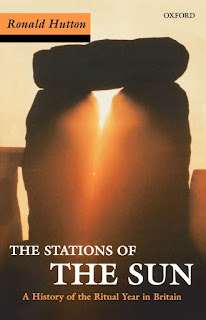 If you enjoy Roud's book, then follow it up with Ronald Hutton's The Stations of the Sun. I think I'd like to be Ronald Hutton in my next life. He writes with such clarity and focus about ritual, folklore and history and where those things messily and creatively merge. He is also rigourous about quoting and interrogating his sources which makes him a historical novelist's BFF. I turned down so many pages in Witches, Druids and King Arthur the book swelled as if I had dropped it in the bath.

I'm not sure, even with the help of these fine gentlemen, if telling ghost stories at Christmas is a tradition of long standing, or if it's a post Charles Dickens thing. I think it's fair to say the long winter evenings do lend themselves to the genre so do remember to curl up with Susan Owens' The Ghost: A Cultural History at some point while the evenings are still long and dark - Anna Mazzola has written an excellent review if you want to know more.


I think I might get my family to tell ghost stories, but it might be wise to twin it with a bit of in-house wassailing. On the other hand, there's that frumenty thing. I did get to have a particularly lovely bowl of frumenty (aka furmity) when staying at The Old Cider House in the Quantocks. Perhaps a frumenty breakfast on Christmas Day would be a good idea, particularly given the festivities begin officially at 11 am with present opening and champagne cocktails. Don't judge us - it's traditional. 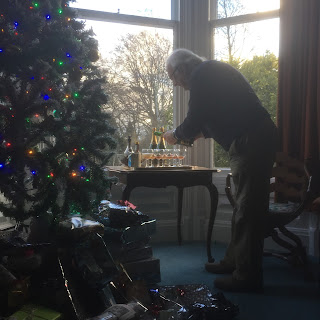 It is interesting looking at the origin of traditions, and many families have their own. One thing that annoys me though is the oft-repeated fallacy that the Americans invented the red-robed Santa Claus in the 1930s. Anyone who has looked at Victorian Christmas cards knows that this costume was well established in late Victorian times by the British Father Christmas. It seems the Americans adopted him, and merged him with St Nicolas, aka Santa Claus.

Ahhh, but though Santa did turn up in red in Victorian times, he also wore a lot of green and even some rather fancy spotted garments up to Edwardian times, so I think it was later that the idea of Santa wearing anything but red became unusual and the huge reach and appeal of the Coke ads had a lot to do with it! (these are the sorts of things I love love debating over a mince pie,,,,)