The treasures of Meon Valley churches

I have only recently discovered the website of Hampshire History, which offers all sorts of fascinating snippets about the history and historical artefacts of our lovely county. It was where I learned about the Tournai font in the church of East Meon, which I wrote about in my last History Girls post. But finding that led me on to other discoveries about the treasures of the churches of the Meon Valley. Many of the church buildings are of course treasures in themselves, as I have already shown, but there are also some especially interesting artefacts, to some extent hidden within the churches, that I thought were worth sharing.


If you are interested in the treasures of other Hampshire churches, do have a look at http://www.hampshire-history.com/category/architecture-artefacts/churches/church-treasures/.

Today I am going to look at a few of the items in the churches of Soberton, Corhampton, Exton, Warnford and East Meon.

[All photographs are © David Hughes]

St. Peter’s church in Soberton is originally Norman but was extended and rebuilt during the 13th century, then again in the 15th and 16th, with further additions in the 19th century. A small tower of an earlier date was replaced in 1525 by a larger structure and it is here that there is a carving – high up, so hard to see – that allegedly gave rise to a legend that the tower was built by servants! 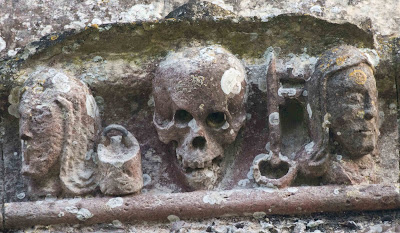 The carving has a skull and two heads, together with a key and what might be a milking pail, though some think it is a purse. According to the mediaeval legend, the tower was built by a butler and a dairymaid, represented by the carvings of the two heads, and this idea is borne out by a plaque in the tower, which says:

Whatever the truth of the legend – and it does sound unlikely! – the Victorians evidently believed in it sufficiently to be able to persuade domestic servants across Hampshire to raise £70 to have the tower restored. How very bizarre!

St. Peter’s does also have another memorial with a potentially intriguing story behind it. In the 13th Lady (or Curle, named in honour of Walter Curle, Bishop of Winchester 1632-1647) Chapel, there are two fragments of a headstone, each with the outline of a tulip flower carved into the corner. 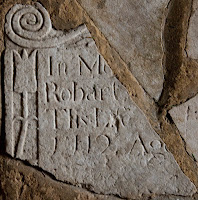 The dedication is to a man called Robart, with a date of 1712 and, although nothing is known about him, there has been speculation that he might have been caught up in the “tulip mania” of the mid 17th century. At that time, tulip bulbs were much sought after and they were bought and sold like any other valuable commodity, especially in the Netherlands. 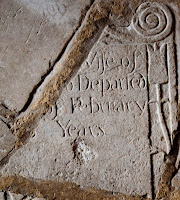 In Corhampton’s wonderful Saxon church (for more about it, see my History Girls post for October) is a fabulous and rare Saxon sundial, or rather tide dial. 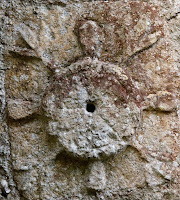 The word ‘tide’ was used to denote a time period and survives today in terms such as ‘eventide’ or ‘yuletide’. In Saxon times, the day was divided into eight tides, each about three hours long. The Corhampton dial is set into the wall immediately to the right of the church’s porch. The dial is divided into the eight tides, rather than the usual twelve hours. In the middle of the dial is a hole where the gnomon would have been positioned. The gnomon is the piece that projects the sun’s shadow onto the dial and would probably have been made from metal. The dial seems to pre-date the building and may even date back to the 7th century, when Bishop Wilfrith was trying to convert the “heathens” in the Meon Valley. It could have been used right up until the Norman conquest, when the use of such dials seemed to fall away.

The village of Exton forms, with Meonstoke and Corhampton, a group of three small communities that straddle the River Meon a few miles south of the river’s source. In Exton’s 13th century church of St. Peter and St. Paul there is a memorial plaque to John Young, who was Dean of Winchester from 1616 to 1645. Why does he have a memorial here? A Scot, born in 1585, he lived at a time of great political upheaval and terror in the country during the English Civil War. He was apparently a great diplomat, and was dean for thirty years until he was removed by Cromwell and retired to his estates near Exton, where he died in 1654 and was buried in Exton’s church.

What is rather fascinating is that John wrote the epitaph for his memorial ten years before his death, and he included in it a cryptic message. 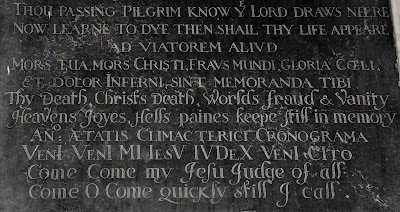 Towards the bottom of the plaque is the following line, with certain letters capitalised:

But this line is a chronogram, which is derived from the Greek χρονος meaning “time” and γραμμα meaning “letter”, and is an inscription in which a date is hidden. The idea is that, taking the highlighted capital letters, you interpret them as Roman numerals to work out the encrypted date. So, V is 5, C is 100, M is 1000 and so on. From what I have read, the letters don’t have to be in the correct order! As I understand it, the date here is supposed to be when John wrote his epitaph. So if he died in 1654, in theory, the hidden date should be 1644. However, try as I might, I have so far failed to make the Roman letters spell out 1644! Please, if anyone else can solve the puzzle, do let me know… 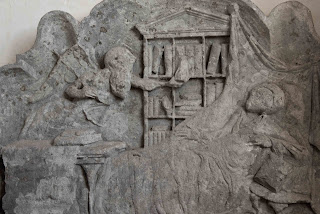 There is another, almost charming, memorial in Exton’s church: a headstone with an inscription to Richard Pratt of Preshaw (a few miles from Exton), who died in 1780. We must deduce that Richard was a bookish sort of chap, for the carving on his headstone shows a man with an elegant bookcase behind him, but a figure who we must presume is Death is summoning him away from his reading.

There is yet another interesting headstone, in the church of Our Lady in Warnford, a mile and a half north of Exton, along the River Meon, a church that is set, alone and alongside the ruins of the old manor house, in the middle of a mediaeval park. (I referred to the reason for this is my History Girls blog for June.) This headstone is a great deal older than Richard Pratt’s: it is 13th century and has no inscription. But the simple cross on the stone apparently marks out the grave as that of a crusader.

I introduced the wonderful All Saints Church, in East Meon, in my last History Girls post, but promised to say a little more about the astonishing Tournai font. But, first, an interesting, if not mediaeval, story about a small stone plaque that sits on the church’s east wall. It was originally on the floor of the church and, when it was removed, underneath were found the remains of four men were found. All were buried standing up… 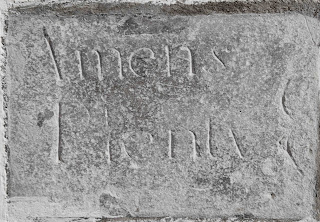 The men were apparently parliamentary soldiers, billeted in East Meon in 1644 before fighting in the battle of Cheriton.  It is said, but can hardly be verified, that they were the ones who stole the lead from the Tournai font to make shot for their weapons. (The existing lead lining is a later replacement.)

On the plaque are simply the words ‘Amens Plenty’. I wonder why?

And so to the Tournai font.

The font was carved in the 12th century by the sculptors of Tournai from the hard blue-black limestone from the banks of the River Scheldt in what is present-day Belgium. It arrived in East Meon in around 1150, just as the original church was being completed, and was probably a gift from the then bishop of Winchester, Henry of Blois, who was a grandson of William the Conqueror. Henry was King Stephen’s brother, the Chancellor of England and the richest and most powerful man in the country after the king.

Two sides of the font have images of birds and dragons, floating above a row of pillars. 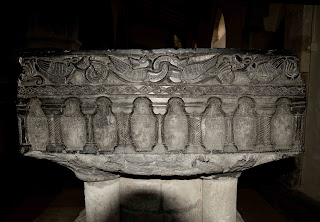 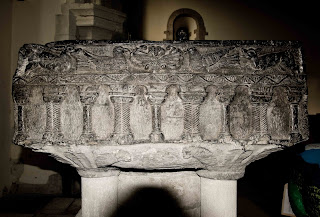 The other two sides show the story of Adam and Eve.

As I understand it, this side shows, from the right, God creating Adam, and then Eve from Adam’s rib. Then Eve is tempted by the snake, which looks more like a dragon with its fangs! And finally Eve tempts Adam with the apple. 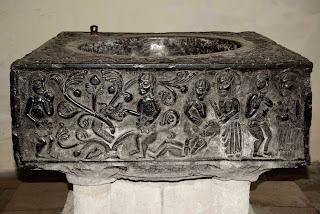 On this side, Adam and Eve are being expelled from the Garden of Eden. Is the angel with the sword barring the miscreants’ way back into Paradise? On the left, an angel is teaching Adam to dig and Eve is busy spinning (what a giant distaff she has!). 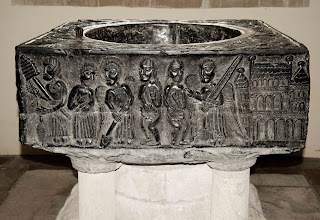 There are in fact four Tournai fonts in Hampshire, the other three being in Winchester Cathedral, St Peter’s church in St. Mary Bourne (near Andover) and St. Michael’s church in Southampton, with only another three in the whole of the rest of the country, so Hampshire is privileged to have so many!

Fascinating stuff! I want to visit that font.

You should, Imogen. I went to see it again only a few days ago, and I thought once more how very remarkable it is. The carvings are so crisp and well-defined it’s hard to believe they were done more than 800 years ago. Magnificent!