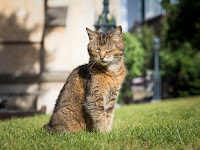 At Southwark Cathedral, the first Saturday of this month was dedicated to cats – a full day of lectures rounded off with a screening of Kedi, a lyrical documentary about Istanbul’s street cats. The ‘Caturday’ event was in part inspired by Doorkins, the cathedral’s own famous cat. Doorkins is no-one’s lap-cat, but she has, shall we say, a compelling presence. As a consequence, she’s become a star of Twitter and Instagram, as well as the muse of poets and writers. This portrait at left is from the cathedral’s website.
﻿﻿﻿
Our Caturday opener was an engaging lecture by Dr Kathleen Walker-Meikle, post-doctoral research fellow based at Kings College London.

Dr Walker-Meikle’s PhD (at University College London) was on the art of medieval pet keeping. She’s now the author of a fine litter of books on the subject, including three about cats. This lecture was based on her latest volume, Cats in Medieval Manuscripts, soon to be published by the British Library.

Of course Dr Walker-Meikle was preaching to the choir here in Doorkinslandia. But I must say that I’ve seldom sat in a lecture room that rippled so with delight. Image after image filled the twin screens, accompanied by text that was both learned and witty, delivered with infectious gusto and pleasure. 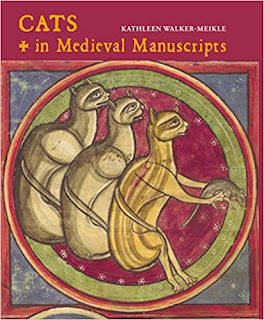 I can only recommend to any cat-lover that they run to their nearest cathedral shop buy this beautiful book. I couldn’t possibly do it justice in a hit-and-run précis. Dr Walker-Meikle has assembled over a hundred beautiful, hilarious and fascinating images of cats from medieval manuscripts all over Europe. As a (reformed) cat anthologist myself, I was pleasantly startled at the novelty and variety of what she has found, identified and interpreted. 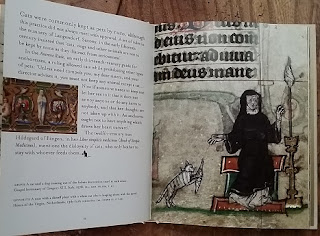 Why so many cats between the pages? Many of our surviving manuscripts were written in the scriptoria of monasteries. Nuns and monks, Dr Walker-Meikle explained, were fond keepers of cats, though they were warned that the activity might detract from the seriousness of the vocations. Therefore it is not perhaps surprising that so many cats found their way into the illuminations and marginalia of such serious texts as psalters and medical tracts, as well as hunting manuals, behaviour books, bestiaries and books of natural philosophy Cats are also present in clerical account books: one particular cathedral cat in Oxfordshire was awarded rations of his favourite cheese. The image that raised the biggest laugh last Saturday was an angry little sketch of cat above a large splash of discoloration and an appended scribal curse on the cat who had urinated on what must have been months of hard work.
In terms of a taster, I’ll limit myself to my sphere of interest these days: the history of medicine. Cats, Dr Walker-Meikle explained, were believed to be subject to their humours just like humans. They were thought to be plentifully endowed with black bile, secreted by the kidneys and spleen and thought to cause melancholy. (And indeed when did you ever see a cat smile without Photoshop? And Doorkins's sombre temperament perhaps proves the point.)

Albertus Magnus warned that cats drown easily when made wet and that those who have fallen in wells must therefore be dried very quickly. Of course it was not surprising to medieval writers that cats, subject to cold and damp dispositions, had a natural propensity for the softest, warmest places in the house. 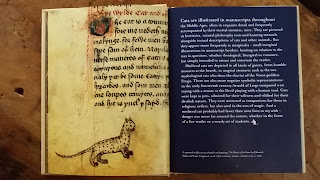 Less happily, cats were sometimes deployed as an ingredient in medicine. Dr Walker-Meikle cites Albertus Magnus on the medicinal properties of wild-cat flesh when placed on the limbs of those suffering from gout, while cat bile was good for facial tics and pain. You could mix a black cat’s bile with jasmine to create a sneezing powder. Less dolorous to the cat was a remedy for a stye: rubbing the eye with a tom cat’s tail.

The audience was delighted to hear that Dr Walker-Meikle continues with her researches. She told us that she was currently writing a paper on mange as part of the Renaissance Skin Project. She has also written about snake bite in the middle ages. Finally, she shared the fact that when she started her cat researches, she did not share her home with a living cat. Now she has one happy owner.

You can follow Doorkins Magnificat on Twitter @Doorkins. The Cathedral Shop sells a selection of Doorkins merchandise – and a percentage of the profits goes towards gifts, food and treats for Doorkins herself.

Michelle Lovric’s website
Michelle is teaching a pair of Masterclasses called FLOW in London in March and April with Lucy Coats. For more details see here
Michelle's post on our sister-site about The Curious Incidence of Felines in Paintings of the Virgin Mary.
Posted by michelle lovric at 00:30

Thanks for this, Michelle - a delightful event, and I love that the Cathedral has its own cat!

I bet the tail wasn't still attached to the tomcat! Lovely post.

Lovely!
My local cathedral, Wells, also has a resident cat, Louis, and another , Maisie, who lives in the Bishop's Palace, although I don't think Louis has his own twitter feed.

Can't go wrong with a cat book, or pictures :-) I am owned by 4 at the moment! but I must look out this book! thank you.