Reimagining the Iliad by Miranda Miller 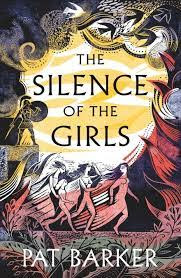 I’ve just finished reading Pat Barker’s wonderful novel, The Silence of the Girls. She writes the familiar story in fresh new language, using contractions, and her characters say “yeah,” and “huh.” I’ve always thought that the main problem, when you’re writing historical (or mythological ) fiction is the dialogue. How did people speak in the thirteenth century BCE? We can’t possibly know. Her characters speak like people in a pub and it works beautifully. This is a long way from the nobleprissyspeak often imposed on the characters in historical fiction . Her matter of fact treatment of the gods also works very well; when Achilles meets his sea nymph mother Thetis on p. 298:”At first, she’s no more than a dark stain on the white gauze of mist, but then, as she wades towards him through the shallows, he catches the silvery gleam of her skin. He both longs for and dreads that moment, because every meeting now is a prolonged goodbye. He’s tired of this, he wants it to be over. He’s spent his entire life saturated in her tears. So when, at last, she disappears into a swelling wave, he’s secretly relieved.” 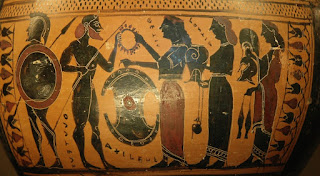 When mythology and the supernatural intrude on the human, for instance when Hector’s corpse is miraculously preserved, you believe Barker’s unsentimental voice. On p. 314: Cassandra “was a virgin priestess of Apollo, who’d once kissed her to give her the gift of true prophecy, and then, when she still refused to have sex with him, spat in her mouth to ensure her prophecies would never be believed.” Historical novels, even more than other kinds of novels, are the victims of changing fashion. Scott, for example, captivated all of Europe in his lifetime but I find him unreadable now. In Barker’s world women are clever and subtle as they watch the loud, boorish men showing off. Women are prizes, things, who are passed on to men of their own caste. Briseis, her memorable central character, is a woman most of Barker’s readers can identify with - a survivor, brave and kind and pragmatic as she watches the war. She sees other women kill themselves to preserve their honour and thinks that she would rather go on living. The men around her like to repeat the adage,“Silence becomes a woman.” 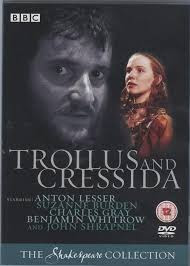 Shakespeare’s ancient men, on the other hand, never stop talking. While I was reading Pat Barker’s terrific novel I watched a dvd of Jonathan Miller’s 1981 production of Troilus and Cressida. Achilles, Patroclus, Agamemnon, Cassandra, Odysseus, Priam, Paris and Helen all appear in both the novel and the play. Shakespeare, after all, was already at least fourteen centuries away from the Trojan War. Naturally, they speak a rich allusive Elizabethan English and, in this production, wear 16th century costumes. Shakespeare’s original audience would have been as familiar with Homer and the Greek gods as most people are now with the character of Eastenders, so he didn’t have to explain what was going on. There are many long speeches which could be boring but which, in Miller’s witty and intelligent production, come to life. The actors have the house style of RSC actors of that period, seeming to think the words before they burst spontaneously from their lips. Charles Gray, who later had great success playing James Bond villains, is a magnificently lecherous Pandarus as he manipulates the lovers. His niece Cressida (Suzanne Burden) would now be seen as the young victim of abuse rather than as a conniving faithless woman. Like the women in Barker’s novel, she is passed on as a prize and has no control over her own destiny. She is dragged off, kicking and screaming, from her Trojan lover to the Greek camp, heartbroken - but, like Barker’s Briseis, she wants to survive in a brutal world where women are powerless. 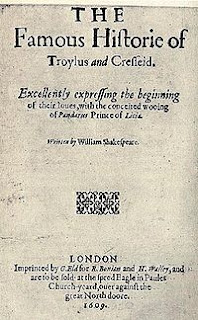 Like Briseis, Cressida sees through the posturing and heroics of the men and when Alexander says of Ajax: “They say he is a very man per se and stands alone,” Cressida replies cynically,“ So do all men, unless th' are drunk, sick, or have no legs.”

The  camp, almost Round the Horn style of Pandarus and the transsexual venomous slave Thirsites - the thing that audiences forty years ago would have found daring and even shocking - now seems rather dated; why make such a fuss about being gay? Achilles and Patroclus appear with their arms wrapped around each other, sexually obsessed with each other, whereas in Pat Barker’s more subtle interpretation they are foster brothers and soul mates whose love may once have been sexual but who have in some way become one another. In Shakespeare’s play, “The great Achilles, whom opinion crowns The sinew and the forehead of our host, Having his ear full of his airy frame, grows dainty of his worth, and in his tent Lies mocking our designs. With him Patroclus Upon a lazy bed the livelong day.” 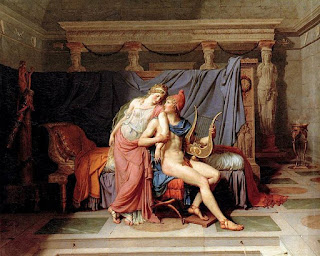 This is David's painting of Paris and Helen.   In both the novel and the play Helen is represented as a bit of an airhead, too narcissistic to understand her own destructive power.


How magnificent these stories are,   a  goldmine for every new generation of writers. Inevitably the new life they are given breathes the air of the period. But they DO breathe, their vitality is astonishing and they make most other stories look very feeble. European civilisation won’t die while they still inspire us.

Email ThisBlogThis!Share to TwitterShare to FacebookShare to Pinterest
Labels: Miranda Miller, The Iliad

Do my homework said...

I`ve had the same topic in my history homework. Thank you for useful information!