The Making of Silk - by Judith Allnatt

Since the Yangshao period, 5,000 to 10,000 BC, silk has been prized for its feel, lustre and lightness and for its coolness in summer and warmth in winter. The value of the textile made the rearing of silk worms (sericulture) seem worthwhile, despite its many difficulties.

Silkworms are fed on fresh Mulberry leaves, so their expensive incubation indoors must be timed to coincide exactly with the opening of the trees' buds. This can never have been an easy matter as the Roman, Pliny, writes of the Mulberry tree, 'when it begins to put forth buds it dispatches the business in one night, and that with so much force, that their breaking forth may be evidently heard.'

The trees grow fast and furious, spreading out so that they are always wider than they are tall. They age quickly but when the limbs collapse the tree grows ‘on its knuckles’, sometimes rooting to form a new tree. In Rodmell, East Sussex a grove, apparently of thirty trees, is in fact only one. 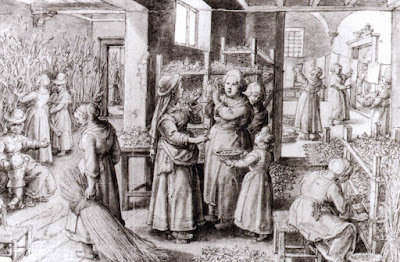 In the early seventeenth century, to support the silk weaving industry and avoid the costs of importing bales of raw silk from Europe and the Far East, James 1st tried to establish silk farming in Britain, ordering ‘ten thousand mulberry plants’ to be distributed. The failure of his rather grandiose plan was probably due to the cool, moist English climate. In 1718 a patent was granted to one John Appletree, who made a plantation to feed silkworms in Chelsea Walled Park and farmed them using ‘a certain engine called the Egg Cheste’ to keep the eggs warm until hatching. Previous methods for smaller amounts of eggs were to stow them in a manure heap or to keep them in a pouch between one’s breasts.

Efforts to farm silkworms on a larger scale continued into the early nineteenth century with a little more success, encouraged by the fashion for lightweight gowns and much decoration. 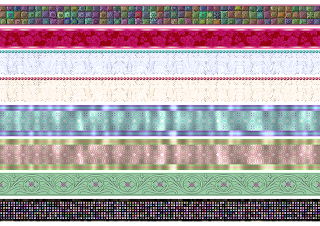 A vast array of different silk ribbons were produced: Chine (painted), Damask (woven), Moire (clouded or watered), Loves (gauze –like), Velveteens, Scallop, Picots and Taffeties. In my novel, The Silk Factory, the rather villainous silk-master, Septimus Fowler, has his daughter wear a whole range of frills and furbelows so that she is a walking shopfront for his wares. The money-grabbing Fowler attempts to cut costs by farming his own silk worms, an ambition doomed by their proneness to disease.

The worms had to be kept in shallow trays, indoors, safe from birds and vermin but the resulting humid conditions could lead to 'pepper disease', which caused them to turn black and to stink. The floor of the shed, or ‘magnanerie’, would be sprinkled with lavender, rosemary, thyme, savory and penny royal, to keep it smelling sweet. The worms were also very sensitive to heavy thundery weather and this would sometimes stop them feeding. This led to superstitious attempts to save them, such as placing iron objects in the shed or carrying a live coal around to waft smoke  about and ‘calm’ them. When healthy, they ate vast quantities of foliage and the sound of their munching was likened to that of a monsoon falling on leaves.

When the worms grew restless and showed signs of wanting to make cocoons, stalks (preferably the ‘boughs of the seedstalk of turnip or asparagus') were placed in a fan shape to make a framework on to which they could crawl. Here, each worm secreted silk from two pairs of spinnerets below the mouth, moving its head to and fro around 150,000 times. 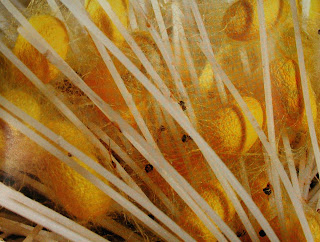 Rather brutally, the cocoons are dropped into boiling water to kill the moth inside as, if a moth is allowed to emerge, the threads of silk are cut and the cocoon is ruined. Only a few moths are kept for mating. The rest meet a grisly end, after which each cocoon is brushed to find the ends of the filament. Then, from a single cocoon, around a mile of raw silk is wound onto a reel and a yarn is made by combining several threads of silk. It takes around 5,500 silkworms to produce a kilogram of silk. 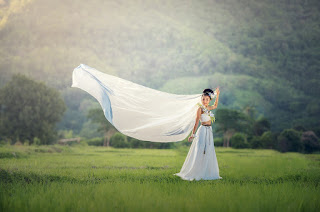 The fabric is still used as a luxury textile and is often chosen for wedding dresses. As Oscar de la Renta percipiently observed, 'silk does for the body what diamonds do for the hand'.
Posted by J. Allnatt at 01:00

once read a fiction book set in ancient chia that hinged on the health or not of the silkworms, was a crime book as someone was killing them with poisoned mulberry leaves, but the noises and the wait for them to grow and then cacoon, followed by the vats to boil them made a very memorable imagery.
I do like silk but it is a pain to wash and keep good!
Thank you for this reminder of how strange it is and how they tried this in the UK and failed mainly!

I have read that the King imported the wrong type of Mulberry tree and that is why his enterprise failed.

Fascinating history. As a dressmaker, I love sewing silk. Its much cheaper and tougher than people think, and doesn't mind a hot wash or iron.