As a writer of historical fiction I have to be both wide-ranging and focused in when it comes to research.  The close focus is always what I absolutely need to know in order to write my novel. The books containing that information have a shelf to themselves at the start of each new project.  I'm moving into the thirteenth century for the new novel (announcement under wraps at the time of writing this blog) and this is currently the state of my shelf of 'must have' material with more to come.  Before that the shelf hosted books on Medieval Ireland when I was writing The Irish Princess, and before that, with works on the Medieval Middle East for Templar Silks.

The wider-ranging material is a looser melange of subjects connected with my chosen project.  I might suddenly need to know about dogs, or harness, or cloaks, or a particular custom on a certain feast day, which means trawling the internet and my broader medieval library of several thousand books.

That's two strands then.  The focused material that forms the outline on the canvas, and the wide-ranging one that takes the form of small but essential points of colour over the main painting.
But the wide-ranging strand has a sub-strand of its own  - the 'random palette'.  These are the colours I don't know will be useful until I read them.
I make it part of my routine around once a month to choose a book from my research library at my whim and read it just for fun/education/see what turns up and it's always a win-win situation.  Either I learn something new to add to my general knowledge base that might come in later, or I find another pod of colour to add to my current paint palette that would otherwise have lain undiscovered. 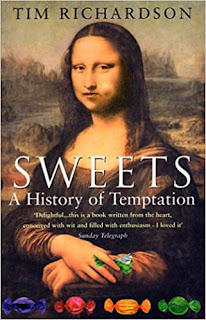 My random book at the moment is one of those and absolute fun and joy to read.  It has been around a while - first published in Britain in 2003.  As the title says (I love the cover), it's all about Sweets: A History of Temptation by Tim Richardson.

Basically it's a history of confectionary from pre-history to modern day that goes far behind the scenes and examines in depth our relationship with sweets - the technical, the social and the deeply emotional.
There are eleven chapters, all wittily or punnily titled, each containing a main theme and a 'lucky dip' the latter being the history of a particular confection.  Thus chapter 1 is headed 'Chocolate Money' and looks at the financing of the sweet industry - the big sweet fairs,  the state of the art Toblerone factory in Switzerland, the secrecy and espionage surrounding recipes. The growth of global brands.
The 'lucky dip' section in chapter 1 traces the history of Turkish Delight. I was delighted to have it confirmed that William Marshal could have eaten this delicacy while on pilgrimage in the Holy Land.
Further delving in ensuing chapters, informed me that William Marshal could also in his lifetime have eaten liquorice, marshmallow, (but wouldn't have enjoyed it as it was a sticky, medicinal gloop)  and enjoyed hard candy, comfits (a seed or a nut coated in layers of sugar) and marzipan.  With reference to the latter, there's an excellent discussion about how the name 'marzipan' came into being - and it wasn't because someone called Marzip invented in 1671 as one claim goes.  Others strands claim that it comes from the Latin phrase 'Marci panis' meaning 'St Mark's bread' which became the Italian 'marzapane', German 'marzipan' and English 'marchpane' and later 'marzipan.' But then it might be from the Latin 'Massapanis'  which was a small reliquary box for holding holy wafers - and perhaps you might put your almond and sugar confection in there and it would take on the name.  Or the Arabic 'mazaban' which came to refer to light wooden boxes used to transport commodities including sweets.   It might even have something to do with a sweetmeat of obscure origin called 'manus christi'

While trawling my medieval period, I also discovered that in 1288, the household of Edward I consumed 6,000lbs of sugar in that one single year.  Sugar had well and truly arrived, at least on the aristocratic scene. Henry VII and his grandaughter Elizabeth I were both described as having black teeth at the time of their deaths, due to too much sugar consumption during their lives and blackened teeth was seen as a failing of the English in general.

As with all things, the surface is often bland and smooth, but once you dive in and begin looking underneath, things become much more fascinating and complex.
The book has a light and amusing touch, but it doesn't shirk the darker sides of the story and there is a chapter on sugar fortunes built on the backs of slaves. 'Slavery truly is the skeleton on the back of the chocolate industry' Richardson writes in the chapter 'Bad Candy' and still continues today.  The 'Bad Candy' chapter also includes a discussion of dodgy additives and a cornucopia of interesting facts. Jelly babies weren't always called jelly babies for example. At one time they were marketed as 'unclaimed babies.' And of course candy cigarettes had to go, not to mention Freekee drops which resembled blood-stained syringes!

Elizabeth Chadwick is a bestselling author of historical fiction.  Her latest novel is Templar Silks, the story of the great William Marshal and his missing years on pilgrimage. www.elizabethchadwick.com 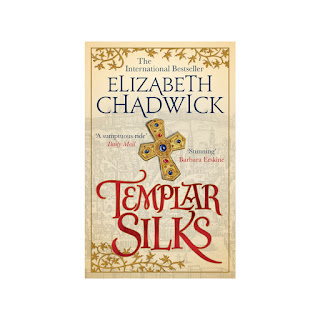 We have a local sweet shop with loads of jars and you can buy a small amount or a lot! and from cough candy to jelly beans and rhubarb and custard!
old style sweet shops are the best! I used to love the candy cigarettes and never smoked ever but loved buying them and just eating the packets whole!

This sounds like my kind of book. I love “history of...” books!