The "Other" Boleyns by Mary Hoffman 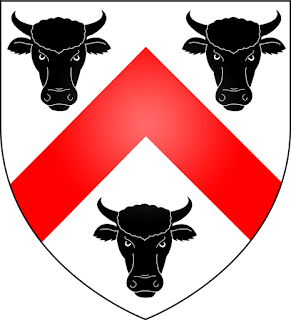 How many Boleyns do you know about? Well, Anne of course. The first English queen to be beheaded at the behest of her husband. And if you know of her fate, it's likely you will have heard of her brother George, with whom she was tried for treason and incest, and who met the same fate as his sister, along with four other men a few days before Anne went to the block.

But hands up if you didn't know about Mary Boleyn until Philippa Gregory wrote The Other Boleyn Girl? Mary, who has undergone a subtler re-imagining by Hilary Mantel since then, was Anne's  sister, who had preceded her as Henry the Eighth's mistress. She was married to William Carey before the king took her to bed and the paternity of her two children has been questioned.

Thomas, the father, and George, the brother of the two "Boleyn girls," have been overshadowed by the attention given to their female relatives. There may not be much material available to researchers, especially about George, but Lauren McKay has found what there is and assembled it handily in Among the Wolves of Court (I B Tauris).

The Hans Holbein portrait above was for a long time identified as Thomas Boleyn but current thinking says it's more likely to be James Butler, who contended with Thomas for the title of Earl of Ormond. There was a suggestion at one time that Anne might have married this man. So Thomas remains elusive if we want to know what he looked like.

What is clear from the documents researched by McKay is that he was an accomplished ambassador whose gifts soon made him part of Henry's inner circle. His embassies to France and elsewhere won him the friendship of powerful and accomplished women like Louise of Savoy and Margaret of Austria and, although his missions later became exclusively connected with the king's Great Matter, seems to have remained popular in many courts.

For a courtier was what he was in spite of humbler beginnings. The Boleyn family were from East Anglia, from Salle in Norfolk and were originally wool merchants. They were important locally and prosperous but it wasn't until Thomas's grandfather, Geofftrey, that the family's influence spread beyond their immediate environment.

Geoffrey became Mayor of London and married a woman who was his social superior. He also managed to stay on the right side of both Yorkists and Lancastrians during the Wars of the Roses, perhaps showing a diplomatic gift that Thomas would inherit. It was Geoffrey who bought Blickling Hall and whose property portfolio at his death was substantial.

Geoffrey's son, William, married Margaret Butler, from a Lancastrian family who fared ill under Edward lV but had their fortunes restored under Henry Vll. They had ten children of whom Thomas Boleyn was the oldest surviving son. His own marriage, to Elizabeth Howard, the daughter of the  Duke of Norfolk, was another step up the rungs of the social ladder.

McKay charts this upwards social trajectory, which was to end in being father-in-law to the king of England, with great skill and readability. And then we reach the bit that everyone thinks they know: Thomas's children: Mary, Anne and George.


The order of birth of the three children whose fates were so intertwined with King Henry and the breach between England and the Pope, is not certain but McKay goes with the idea that Anne was the eldest.

Her father sent her as a teenager to the court of Margaret of Austria. And later she was a lady-in-waiting to the king's younger sister, Mary at the time of her brief marriage to the king of France. Years before Thomas had accompanied the older sister, Margaret, to Scotland for her marriage to James lV.

In fact, there was scarcely any big event in Henry's early reign at which one or more Boleyn wasn't present, from the conversations the morning after the wedding night of Prince Arthur and Katherine of Aragon to the Field of the Cloth of Gold.

Thomas had been a protégé of Cardinal Wolsey and often carried out his embassies on Wolsey's instructions. But the picture that history has of him as a grasping and greedy father who benefitted  in honours and money from pimping out his daughters to the king whose close adviser Wolsey was seem unjustified.

Thomas was a deeply pious man and had earned his rise in fortune and the king's favour long before Mary and then Anne caught the royal eye.

In 1524, Thomas's father-in-law, the Duke of Norfolk, died and from then on he had to deal with his far from diplomatic brother-in-law, another Thomas, who inherited the title and would one day preside at the trial of his niece and nephew. Around this time young George Boleyn appears on the scene, aged twenty, with negotiations for her marriage to Jane Parker.

George is even more elusive than Thomas in the documentary record but remember he was only just over thirty when he was executed. His wife Jane, whom history knows as Lady Rochford, was already linked to the Boleyns through marriages in the extended family and a suitable match. (But I do find it odd that Julia Fox's book Jane Boleyn: The Infamous Lady Rochford is not listed in the Bibliography).

Thomas was training George to follow in his ambassadorial footsteps. The young man was handsome, richly-dressed, educated and fluent in French. He had been a page at court from 1514; Mary became the king's mistress around 1521 and Anne was Henry's new love interest from about 1526. This proved ultimately the worst thing that could have happened to George.

Anne and her brother became the centre of a new young courtly circle of the beautiful people, who were also at the forefront of new ideas about religion. They were clever, cultured, fashionable, the in-crowd that all at court wanted to please. As long as Anne enjoyed the king's favour, she and her equally attractive and fascinating brother had the illusion that they were unassailable.

Enough has been written about what happened next, about Henry's arduous efforts at divorce, the breach with Rome, the marriage with Anne, the lack of a male heir and the turning of the king's interest to the altogether more malleable Jane Seymour. McKay admirably does not dwell on these. Both male Boleyns were present at the hearing in 1529 when Queen Katherine refused to recognise the court in which her marriage was being effectively tried.


Amazingly, Thomas survived his children's trial and execution. But he continued with his role at court as a noble and Knight of the Garter for the three years until his death. He even attended the funeral of Jane Seymour, his daughter's successor, and had duties connected with her corpse. What must his emotions have been?

At Thomas's death, Henry paid for masses to be said for his soul and his reputation does not seem to have been diminished at court, in spite of the crimes his children were convicted of and died for.

This is a splendidly researched and written book, very ill-served by the publisher. It is well-produced but terribly badly copy-edited and proofread. King Louise [sic] of France, "flair" as a verb when "flare" is meant  etc. And I can't believe it was the author who messed up Henry Wotton's famous definition of an ambassador so that it reads, "an honest gentleman sent abroad to lie for his country's good" - ouch!

The most egregious error is the attribution of the epigraph to Chapter Eleven to Shakespeare's Edward ll! (It's not from Marlowe but from Richard ll).

I do hope all these errors will be smoothed away if there is to be a paperback edition. They are unnecessary blemishes on a good piece of work. 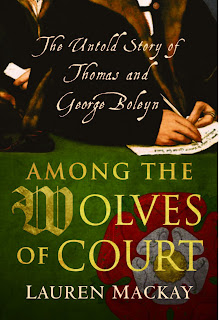 Interesting times, we seem to find out more about this time of history every year, I do hope the copy editing gets sorted, nothing ruins a good read than bad grammar or spelling!

Really interesting review, though I am surprised that despite being sticklers for grammar and spelling, and having a picture of the author's book and name in front of you, her name is constantly and incorrectly spelled as "McKay"