I first came across Marianne North when I was doing the research for my children's book, Jack Fortune and the Search for the Hidden Valley. Jack is a boy who goes plant hunting in the Himalayas with his uncle at the end of the 18th century. It's an adventure story, but it's also about facing up to your fears, and about respect for tthe environment and for other cultures.

I wasn't able to get to the Himalayas, so I had to find gardens that would give me a sense of the kinds of vegetation found there. Also, Sir Joseph Banks, who had a great part to play in the early development of Kew, is a character in the book - so it made sense to visit Kew, take a turn round the tropical house and the alpine garden, and see if they had any useful books in the shop.

While I was in the shop, I noticed some rather beautiful postcards, with plants and flowers shown in detail in the foreground, and views of landscapes from all over the world in the background. The colours were jewel-like and brilliant, and I had seen nothing like them before. They were by Marianne North, and the originals were in a specially built gallery within the grounds of Kew.

I'm not certain now whether I didn't go to see them because we were on the way out, or whether the gallery was closed for refurbishment - I think it was the latter. Anyway, I didn't go, but I did read up on Marianne, and found that she was a very resourceful Victorian lady, who when her father died and left her comfortably off, decided to devote the rest of her life to travelling to the most far-flung corners of the world in order to paint and study plants. She must have been an incredible character. She knew Sir Joseph Hooker, the director of Kew, and when she had accumulated hundreds of paintings, she offered to pay for a purpose-built gallery at Kew to house them. She oversaw the placing of the pictures, and this is the result: they're all very close together, and each one is stunning. 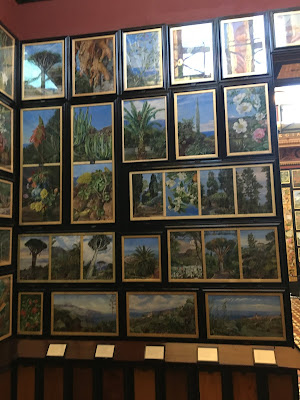 That first time, I bought a pack of postcards of her pictures. One of them is of number 270: Distant View of Kinchenjunga from Darjeeling. In the foreground luxuriant vegetation clothes a steep ravine, and in the distance are the snow-covered peaks of the Himalayas. It's a beautiful picture. The mountains, framed by the foliage seem like an unattainable image of loveliness. I remembered this picture when I came to the point in the book where Jack's Uncle Edmund, having travelled thousands of miles to reach Hakkim, is told by the Maharaja that he will not be permitted to travel any further. Edmund glimpses this view, and Jack sees on his face a look of longing and despair that makes him determined to somehow overturn the Maharaja's decision, for the sake of his uncle: it's really a turning point in the book - the first time that Jack becomes properly aware of other people's needs and desires. 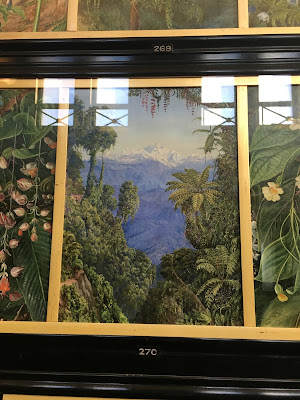 Well, so yesterday a friend suggested going to see the annual orchid festival at Kew, and I realised that here was my chance to visit the Marianne North Gallery and see it for myself. It was one of those warm, sunny days that you sometimes get in February: perfect. First we went to see the orchids. Apparently orchids grow on every continent, and each year, the festival focuses on a different region. This year it's Colombia, where scientists from Kew have a number of projects on the go. The colours were extraordinary, and there were quirky touches, like this sloth, and the hats perched on top of the cacti. 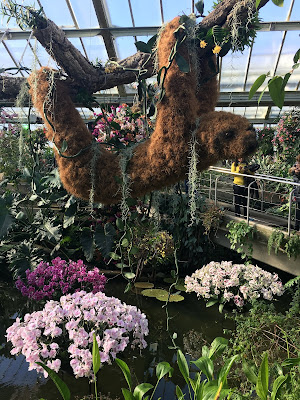 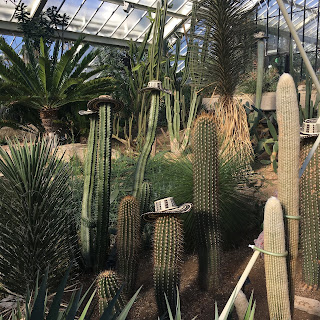 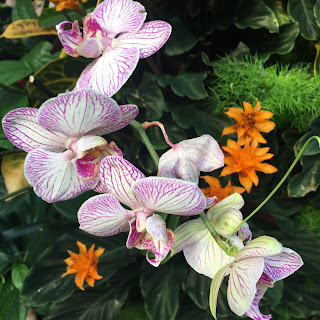 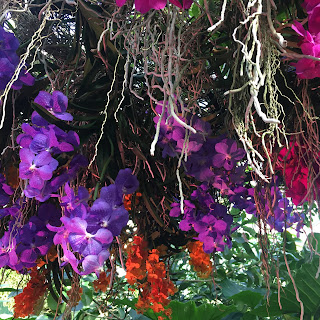 I don't think Marianne would have approved of the hats, but she would have loved the colours of the flowers.

After the orchids, we  went to look at the Hive, which is this intricate metal structure which mimics the complexity of a beehive. It shimmered beautifully in the sun, but I would love to see it at night, when the hundreds of tiny LED lights must make a glittering display. 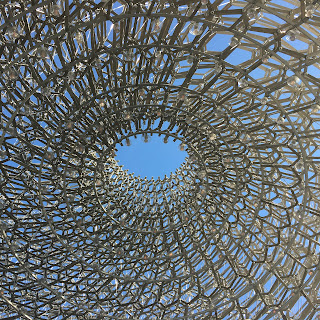 And finally we arrived at the gallery. There is another gallery beside it now, which had exhibitions of botanical art, and we looked at this first. This picture of an ancient oak tree is one of a series of graphite drawings by Mark Frith, called A Legacy of Ancient Oaks. The photograph really doesn't do justice to the detail; they are huge, and exquisite, and utterly different from Marianne North's work, which we came to next. 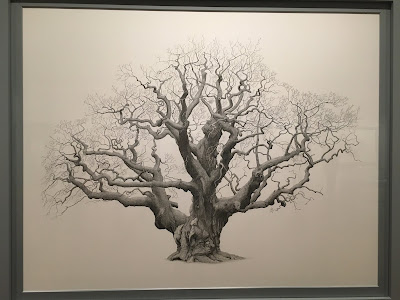 I don't know of anywhere else where paintings are displayed in such a way as they are here. There are hundreds of them, all very close together: they're somehow not overwhelming, but of course you can't take them all in at one visit. I was searching for my special picture, the one of Kanchenjunga, and it took me a long time to find it. On the way I saw landscapes from South America, from Australia, from South America, from Malaysia - from all over the world. And I realised that they don't just show the plants. They show what the world was like in the second half of the 19th century: there are people there too, and the places they lived in. She saw so much, and she captured so much.

Incidentally, if you look at the cover of Jack Fortune, you may see that there's a reference to Picture Number 270, just in the layout of the cover image. This pleases me very much! 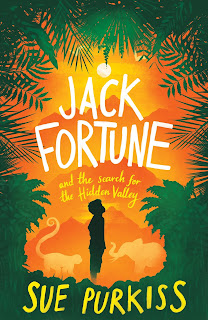 I love Marianne North - and some day I would love to visit her gallery. Thanks for this, Sue!

Beautiful paintings, far more vibrant and alive than most 'works of nature' from that period. They evoke a feeling of fantasy and fact intertwined; of one's hope those places are rather than what they may be. I wonder what her thoughts were by placing them so closely together?
Jack Fortune and Search for the Hidden Valley (such a wonderful title!) seems like just the type story I love.

Thanks, Joan and Abigail. I wonder that too, Abigail. I suppose it was partly a matter of space; to display them all with the normal amount of space given to paintings in a gallery would have required a very big building! But maybe also she wanted the intensity that massing them so closely together created.

As a child, my family made a visit to London and we saw the planetarium the science museum, the natural history museum and Kew gardens. Bear in mind it was a day trip from Devon we got a lot in. The Kew stop was my father parking along the roadside and my mum taking my brother and me in while he had a rest before the drive home. We went in by the Marianne North Gallery as it was in the late '70s, cluttered, unloved to a certain extent but to my young eyes, it was a magical place, every picture a new world and new story. The colours glowed even in the dull space, crammed in every corner and space, the images stay in my mind even to this day. Many years later in the end of the 1980's I lived just north in Ealing for 4 years and had a Kew garden annual ticket, I spent hours sat in the temples studying, lying on the grass watching planes and planning essays and many many hours sat in the old gallery layout, the joy and magic undimmed and the feeling of lightheartedness still remembered. my last London trip it was closed for the changes and sorting and I plan to visit again one day and enjoy it again, each visit shows me new things and just makes me happy. I doubt I ever thought about Marianne North and the wider world, but the dreams have never faded.
Thank you for reminding me of this wonderful place.

What lovely memories, Ruan! I wish I lived near enough to go more often - I've only seen a fraction of it.

Must try to fit in a visit to this collection next time I'm in London for a longer stay. Thanks for the recommendation.