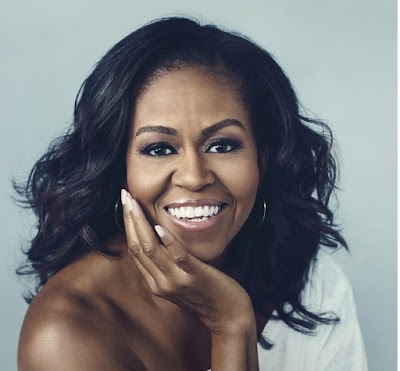 Sometimes you just know that you are witnessing history: when Kennedy was shot; the first human stepping onto the moon; or when Margaret Thatcher became the first female British prime minister. At other times, history creeps up on you, such as the invention of the internet, or Twiggy getting a damehood for being the face of the 1960s.
I'm not sure whether Michelle Obama crept up on me or exploded into my consciousness. But her autobiography makes it clear that her extraordinary life has been one of determination and immaculate planning. She can’t have known that she would find herself living in the White House, but it sure took some hard graft to get there. If she had not backed her husband so resolutely, it's unlikely there would have been an African-American President of the United States in 2008.
When ‘Becoming’ was published last year, the headlines were all about Michelle’s miscarriage, her daughters born by IVF, and the marriage guidance counselling. ‘How tedious,’ I thought. ‘These are such stereotypical women's issues. Isn’t she a clever feminist, fighting for our rights to be equal?’ But having read the book, I now see it was just typical journalism, and we all know that most journalists don't bother to read a whole book, especially one that is 428 pages long.
I'm really glad I have read this, all of it. I feel as if I have witnessed history as it unfurls. Michelle Obama comes over as an extraordinary woman, even if this is her own version of her life. She was born into a poor but loving and hardworking African-American family on the rough side of Chicago. Her great great grandparents were slaves; her parents were unable to get the education they deserved. Michelle Robinson grew up knowing that as a female of colour, she had to put in the extra mile, if not ten miles, to get anywhere. She did, and then met Barack Obama who had similar ethics and aspirations. They fell in love slowly, which meant she wasn’t blind to his annoyances. (Most of which are the traits of a super-human angel, such as no interest in material things, a total focus on the job or person, and an indifference to his own good looks.)
She is honest, not just about the difficulties in getting pregnant, but also her resistance to politics and her husband's desire to be president. She made huge personal sacrifices, but refused to give up being a good parent, and managed to raise two sensible daughters under the relentless glare of the media.
Michelle is no non-speaking fashion model, like the current First Lady of the US. As soon as the first presidential election was won, she said to herself, ‘How can I use this unique platform for the greatest good?’ But she had to navigate what was, and was not, acceptable for a FLOTUS to do. She looked at previous First Ladies and decided that she didn’t want to arrange flowers, but nor did she want to be seen to be involved in her husband's political work, as Hilary Clinton had. So she concentrated on childhood nutrition, families of servicemen, and inspiring under-privileged young people to do better. Following her visit to a girls’ state school in London the girls were so affected that their grades and university admissions noticeably improved.
It is fascinating to learn what it feels like to live in the lap of luxury in the White House, but never be allowed to open the bullet-proof bedroom windows; to have an army of domestic staff, but still have to pay for whatever food that they have chosen to cook for you.By travelling inside a plane with Michelle as she zig zagged around the nation, I started to understand the bizarre system of elections in the USA. When she nearly has a breakdown from the exhausting regime, she gave herself ‘Me Time’, by getting up at dawn and going to the gym! There were times when I thought, ‘This woman is too perfect, a worker, wife and mother.’ But then she admits to her failures, doubts and the problem of juggling all those lives. That’s a theme that makes this book part of the history of women. Michelle Obama's life is unusual, but it is also typical of the late 20th and early 21st century. It’s one we can all identify with: how can we have it all, and not collapse in a heap?
I was surprised not just by the message of this book, but by its style too. It is beautifully written, and copy-edited to a T. Apart from the odd reference to US television programmes that I'd never heard of, I never stumbled over a sentence, or got bored of a topic. I don't believe that a highly trained lawyer such as Michelle can write in her own voice so fluently without help. She thanks ‘an incredibly gifted team of collaborators’ in the acknowledgments, and I can picture experienced ghost writers sitting with her and a tape recorder, quizzing her for the details that bring her story to life. What were you wearing that day? What was the weather like? How did you feel inside? It is all there, and makes the book and her life readable, and believable. For once, I’m grateful to ghostwriters. They have enhanced her story, and made it feel more real than she probably could. (Apologies, Michelle, if you wrote every word yourself! You are even more talented than I imagined.)
I predict that the compelling life of Michelle Obama will be retold in many a school history lesson about ‘Great and Inspiring Women of the 21st Century’. Read this candid and powerful book now, and be ready to tell your grand-daughters all about her. She will inspire them that anything is possible: they don’t need special talents, just plain old-fashioned perseverance.

Oh lord, for someone comparable in British politics!
Or even in American politics...

Michelle Obama is one of my role models. I fear women of this sort are few and infrequent. Which gives us something to work towards!

Oh, you captured it all so well here! I had similar thoughts about her "collaborators" but however she did it, it is a class act like everything else she does. If you don't mind, here is a link to my review. https://keepthewisdom.blogspot.com/2018/12/becoming.html

I'm listening to this on audio at the moment - read, of course, by the author herself. It's excellent!

Books by political types are not really my cup of tea. About the nearest I've ever got to that was Long Walk To Freedom. And so, I haven't read this book.

I did though listen to part of it when broadcast on BBC Radio 4. It sounded very much what I expected it to be. Bland, well manicured, and greatly over produced (to use a musical term). As the poster here alludes to .... ghost writers, influencers etc, etc.., all taking their toll.

Dear Andrew, What made Michelle Obama's memoir different is that she is frank about her distaste for politics. She likes to get on and do, rather than sit and talk. Unusually, I felt that the ghostwriters 'caught' her voice well, and so did her no disservice.