One of the first things the budding fiction writer discovers is that, left to their own devices, characters will spend a lot of time standing around talking in the kitchen.

I don’t suggest they should be hanging off cliffs instead, but if they’re doing nothing but talk, their dialogue has to be of stellar quality to hold the reader’s attention. For those of us who aren’t Harold Pinter or Shakespeare, it’s helpful to give them something to do. Preferably something useful, because that’s another thing about fictional people – they never eat properly, look after their children or earn a living unless the writer makes them get on with it.

Obviously characters can’t be so burdened by the daily struggle that they have no time to fall in love or investigate murders or whatever the purpose of their existence might be. They do, though, need to be anchored in some way to the reality of the world around them. At least, mine do. All of which set me to wondering: what did ordinary people in the Roman Empire actually do all day?

It turns out that for very many women, life must have involved a great deal of this: 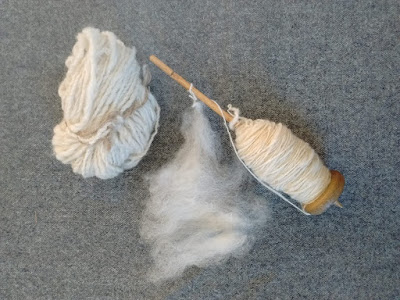 In order for families to be clothed, either somebody had to grow flax, or wool had to be coaxed from being sheep-shaped to being roughly the shape of a human. So in the interests of research, I purchased the drop spindle you see above, found some wool and got to work.

Several years on, Downie Towers is home to many bags stuffed with potential. Or, as Longsuffering Husband sees it, with wool in various half-finished stages of processing, along with a faint but all-pervading whiff of rural life.

Imagine his joy now that a new development has begun. From the limited evidence we have of ancient textiles, it’s clear that our ancestors loved to wear colour. Most of the samples that survive have turned dingy brown, but here's a 'before and after' photo from Vindolanda, on Hadrian's Wall. 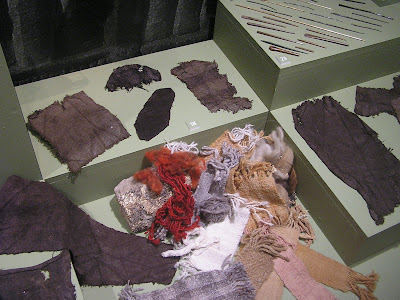 Here are more of the glorious colours that can be produced by the use of natural dyes. They were on display alongside the Battle of Fulford tapestry, of which more in a moment: 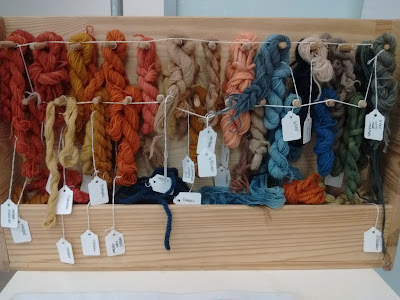 Even our own garden, it turns out, is full of materials that can be used to turn the pallid contents of the wool-bags into a splendid riot of colour. Well, in theory. Below are some of the actual results. They've been tactfully described by a visitor as “pastel”. Evidently dyeing, like spinning and—my next project—weaving, is a complex skill as well as an art. 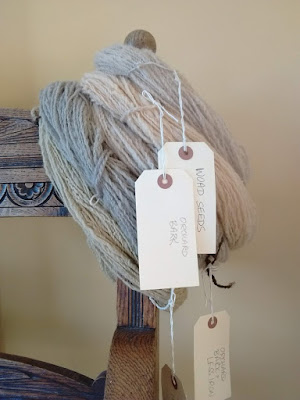 So, what did I learn from this attempt to give my fictional characters something useful to do? 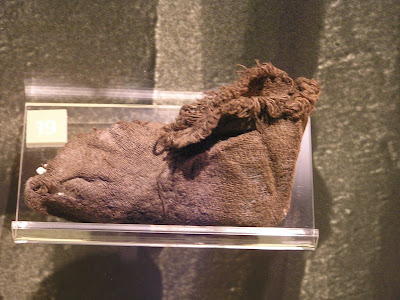 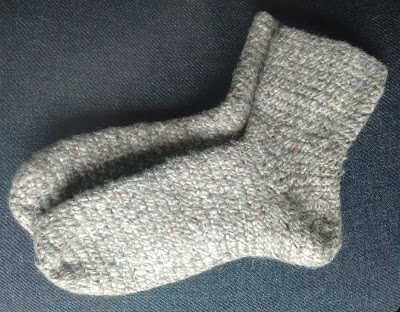 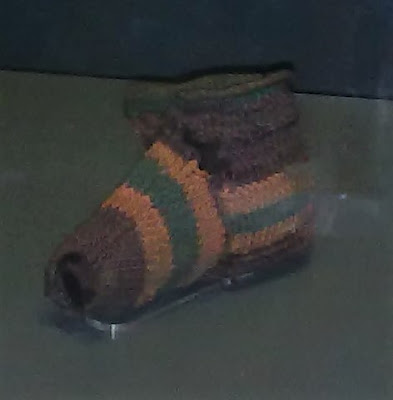 The Fulford Tapestry is a fantastic project that began in 2000. You can see the whole of the finished tapestry, and how it was made, at their website.

Meanwhile back at Downie Towers,the best that can be said is that we’re well on the way to producing Fifty Shades of Beige. 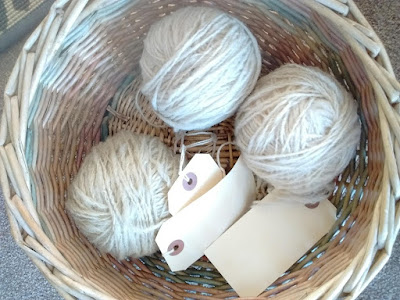 There is a strange pleasure in doing something like this even though the end product rarely lives up to the early vision. Because the past is not only brought alive by reading words, visiting places and seeing exhibitions. Sometimes we make connections across time by doing.

Your little stripy sock is Naalbinding -just a different stitch from the Viking examples, commonly called Coptic stitch. So yes, naalbinding is known from the Roman world. ;)

Ah, thanks Catherine! I got the description from the museum info but was a bit baffled by what they meant. That would make sense of the stripes - the maker recharging the needle with wool.
Shifting sideways, do you know if any naalbinding has turned up from Britain in the Roman period? I can't find anything and it would be great to know how they were doing it here.

Natural dyes are not colourfast, so I suspect the pre-modern world really was fifty shades of beige, even if the fabrics started out red or blue.

Such an interesting post, thank you so much for posting it. What skills they had and still do.

Thanks Michelle Ann, a very good point and also timely, since I've just created yet another shade of beige this afternoon...

Hi Toffeeapple, and thank you - I'm delighted you enjoyed it. There's so much to learn!

Fascinating post -- and the amount of labour involved makes sense of things like the kilt and plaidie, which in its original form was just a long strip of cloth that you lay down on and rolled yourself up in. Then you threw the loose end over your shoulder and fastened it all with a brooch. No sewing, cutting or darting!

Good thought, Susan - it sounds like the ultimate multi-purpose, all-size garment with no tailoring required! (Sorry if you get this reply twice but I think my spiffy new phone ate the first one.)

I spin and weave and even tried tape weaving on a small loom. I also dye wool. Depending in the mordant ( the pre or post rinse ) of the wool, the colors become quite fast, Blue can come from woad, red from madder, though it can sometimes be mauve depending on the mordant.
Clothing was often not only repurposed, but passed on to heirs as precious garments (Hence the spread of the Plague in medieval times ).
The whole study of early textiles is fascinating. As a rule of thumb, three days of carding wool to produce enough weft to weave 1 day of weaving three days of weaving to produce about a yard of cloth between 24-30 inches wide. While spindle spinning can be maddening, and old type wool frustrating, it can become a very soothing activity. However spinning on a wheel sped up production. But that didn't arrive until the middle ages introduced , possibly, from the East.
Sorry to be so long and thanks for the links in this post.

This is a wonderful story. You bring the ancient past so vividly to life with your stories of learning this technique. But somehow, I can't imagine Tilla carding and spinning wool for clothing. If she tried it, there would be screams of frustration and knots of tangled yard everywhere. And with all their peregrinations, it doesn't seem as if they're packing a loom about the Roman world. Surely, Ruso will go out and find a helper for her: ideally a waif rescued from some evil master who turns out to be an adept spinner and weaver. Or a pitifully neglected youngest distant cousin of Tilla's from beyond Hadrian's Wall.

Lucie, thanks so much for this - there's much food for thought here, not least the grim prospect of passing on disease along with clothing...ugh. And I've often wondered how long the various jobs would take if one were doing them properly. (Actually another thing I've begun to learn is how generous craftspeople are with sharing their knowledge.)

Oh this did make me chuckle! While Tilla has been known to pick up a spindle to pass the time on a long sea journey (well she's not going to get much conversation from her husband, who's a terrible sailor) I fear her ability as a maker of clothing may be on a par with her cooking...