Alexander and Bucephalus at the Gates of Paradise – Katherine Roberts

The Year 6 children of Fairholme School have just completed a wonderful project inspired by my novel I am the Great Horse and Paulo Veronese’s painting The Family of Darius before Alexander, part of the National Gallery’s Take One Picture initiative. This led them to produce and publish their own illustrated book “The Amazing Adventures of Bucephalus and Alexander”: 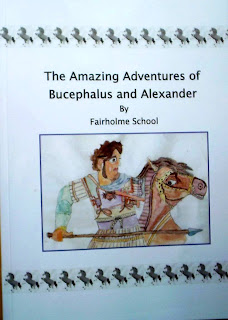 Since "I am the Great Horse" was responsible for some of the contents, their head teacher very kindly sent me copy. In its large and colourful pages are stories, poems, and illustrations by the children, mixed with famous pictures of Alexander and King Darius and film stills from Francis Ford Coppola’s "The Black Stallion" and the final cut of Oliver Stone’s "Alexander" (and if you haven't seen it yet, I highly recommend this film!)

Dare I say it, the children of Fairholme School have even improved on the orignal story. Their book opens with an imaginary chapter about Bucephalus being shipwrecked on an island in the Aegean with the boy Alexander. Here boy and horse form a bond so that years later, when Bucephalus is brought to Pella wild and unrideable, he recognises Prince Alexander and trusts him enough to allow him on his back. 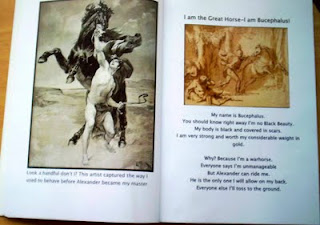 The story then whisks us to Persepolis in Persia, where King Darius is celebrating Nowruz, the Persian new year. Delegates from all around the world bring him treasure, except for the Macedonians, who famously bring him nothing but a challenge from Alexander. There are several amusing accounts of this, including the Egyptian Times reporter Sophie Hogg who “always gets the juicy gossip she wants”. King Darius, furious, sends Alexander a bowl of sesame seeds and a bat and ball, telling him to count the seeds because they are the number of soldiers in his army, and to play with the ball because is acting like a child. But Alexander cleverly scatters the seeds on the steps of his palace, where the birds fly down and eat them all. “Those are my soldiers,” he tells the Persian envoy. “Eating King Darius’ army for breakfast.” 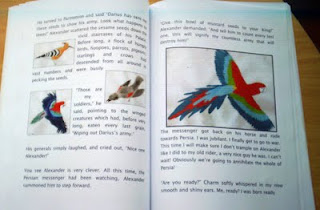 The battle of Gaugamela is next, with some colourful pictures of Persian soldiers losing to Alexander. Then comes the famous death of Darius, after which Alexander and Bucephalus fight strange creatures and huge poisonous flowers in a fantasy land inspired by the Greek Alexander Romance, when Alexander tries to get into Paradise but finds the gates firmly locked against him.

This is told in a powerful story "The Vanity of Ambition” where a wise man weighs Alexander’s fragment of a skull against an increasing quantity of gold, yet the skull is always the heaviest, representing the unending desire of man… only when the wise man covers up the skull’s eye socket with earth (representing death) do the scales tip the other way, since this finally puts an end to its lust and ambition. 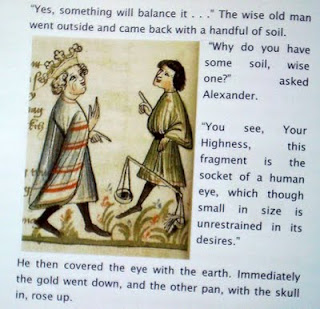 Alexander should have learned a lesson from that, but fights one last battle against King Porus’ elephants in India, in which Bucephalus dies. Heartbroken, Alexander names a city after his brave horse, inspiring the children to write this touching poem:

I will always remember you.
Even though you have passed on
Our bond will always last
As to me you are forever young.
I am going to make you the biggest and best funeral pyre. Afterwards I am going to keep your ashes in a jar in my tent where I can see you.
Bucephalus, I hope you make it to Paradise!

And you'll be pleased to know that in the Fairholme book Bucephalus does make it into Paradise, where he bathes in the Waters of Eternity.

So even while the Great Horse gasps his last in printed form, if he has inspired just one class of children to create such wonderful work and discover along the way more about Alexander the Great, then my book was worth writing. Such is the power of historical novels (and films) that educate and inspire as well as entertain.


The rights to I am the Great Horse are reverting.

Email ThisBlogThis!Share to TwitterShare to FacebookShare to Pinterest
Labels: Alexander the Great, Bucephalus, I am the Great Horse, Katherine Roberts, Oliver Stone

Agree entirely - in this day of printing on demand there is no reason why a book should go out of print.
They might need to cost a bit more but no reason why books shouldn't remain available.

Katherine, how horribly frustrating! Especially when schoolchildren and teachers are using and enjoying your books.

I hope in this age of Kindle and iPad your decision to publish in e-format pays off in spades, especially with the children who so enjoy your books!

I an the Great Horse is a fabulous book and it's very shortsighted to put it out of print. With luck, though, and your electronic know- how, I hope it's on Kindle to download. Good luck!

It's just awful to hear that a book as good as 'I AM THE GREAT HORSE' is going out of print. LIke everyone else, I hope that you get it back and sell masses on Kindle - and that it goes into paperback in the US...who knows, maybe in a year or two some more switched-on publisher will reprint it!

What the children did is wonderful. And by the way, I reckon you keep the crown for 'Most Beautiful and Evocative Blog Post Title'!

Katherine. Thank you for that. I am appalled that your wonderful novel is going out of print. Unfortunately, you are not alone.

Nevertheless, your post brought tears to my eyes; tears of joy and hope. What a wonderful teacher those children have. She or he understands the power of history and stories and has inspired the children to produce something new and powerful that I am sure they will always remember. It goes to show that the art of story-telling that moves the heart and mind will never ever be lost if we make an effort. They won't ever forget your novel that inspired them.

Books may die but memory and story will always be with us.

I really like that last line of yours, Sally! "Books may die but memory and story will always be with us." Lovely.

But books don't HAVE to die in this digital age, and that's why I am republishing the Seven Wonders series as e-books. The first half of the series got quite a bit of exposure, but the last three did not have big print runs so I want to make those available for the people who couldn't find them in the shops... that's why I am starting with Book 7. (The Wonders can be read in any order, since each book is an independent story with a different set of characters).

Thank you everyone for your kind comments about "I am the Great Horse" - the hardcover is still selling in America so I really hope they do the paperback over there. But if the rights do come back to me, I'll be seeking a new publisher, perhaps someone interested in bringing it to the adult historical market?

You know how much I love I am the Great Horse, Katherine, and I too think it is the wrong decision t let it go out of print.

But what a lovely book the children made!

In researching the story behind the painting "The Family of Darius before Alexander" by Veronese I found Katherine's I am the Great Horse. Once I'd read it I knew this was a book that would bring the whole subject to life and that we had to share it with the whole year group of year 6 children. The book so inspired us through the character of her brave, opinionated and fearless horse. Bucephalus' voice lived on in my head for weeks after I'd finished reading it-I found the end so moving too. So thankyou Katherine for creating such a wonderful book which inspired us to write and publish our own version-and we made an opera too which we called The Great Horse and the Monkey!

Ken Noakes was the head teacher behind the project at Fairholme School... thank you for leaving a comment here, Ken! I am really pleased to be able to share the children's work on the History Girls blog.

Although she writes in a very different genre, Louise Voss has recently had tremendous success with self-publishing. Perhaps you've read about her? Here's a link if not.
http://www.bbc.co.uk/news/entertainment-arts-13853728
I'm really sorry to hear that such a great book is going out of print but with the increasing dominance of the e-book (I wonder how long it will be before schools give out e-book readers at the beginning of term) perhaps the term 'out of print' itself will become obsolete.

Thank you Linda... I know some authors seem to do very well, but I fear I am not a very successful self-publisher! I am really only taking this route to make my backlist available for fans, and because the e-book field interests me with my background in IT.

But I hope schools start giving out those e-readers soon... and I hope when they do, they are Kindles!