THE BIRDMAN OF ALCATRAZ – NOT! by Theresa Breslin 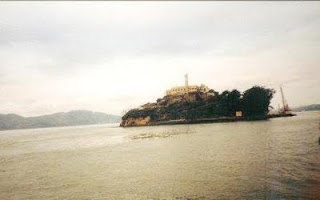 The 11th October 2001 was a very strange time to be in the United States of America. It was exactly one month after the events now known universally as 9/11 and I was speaking at a Conference on Children’s Literature which was taking place in San Francisco. The Conference itself is not directly relevant to the subject of this Blog. (It is relevant to another title of mine, REMEMBRANCE, which will be the subject of a later Blog) The location of the Conference is what is of interest here. In San Francisco Bay lies the island of Alcatraz.

The country and the city were in a state of anxiety with constant terrorist alerts. The main landmarks were believed to be targets and had restricted opening hours or were closed altogether. To my husband’s disappointment, in the tourist information, Alcatraz was listed as one of the latter. Then, on a stroll along the pier one day, we saw a chalked board announcing that the island would be open to visitors for a few hours that afternoon. We took the short boat journey past the basking sea lions to the island known as The Rock.

For most people Alcatraz is famous for its prisoners of past times such as Al Capone, Machine Gun Kelly, the Birdman etc., but the island has a much longer history. It became a fort when California was first settled and a key fortification during the American Civil War. It was used as prison then, and also later, during the Indian Wars and the Spanish American War. The island is in a key position to defend the harbour of San Francisco, the city and the f 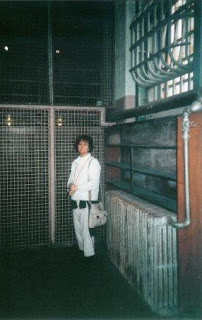 ertile valleys beyond.
As a person who feels uncomfortable in enclosed spaces a tour of a maximum security prison wasn’t my first choice for an enjoyable day out, but it is on the San Fran ”must see” list. I thought I might just wander around the recreational and workshop areas, but as we landed we came across a bookstand where a former prison officer was signing copies of his memoirs detailing his life as a young prison guard in Alcatraz. I bought a copy and while chatting to this very courteous older gentleman I asked if he’d met any of the more infamous prisoners. To which he replied casually,
‘Well, there was the Birdman.’

I imagine the antennae of every writer would have been set aquiver hearing that.
‘Really?’ I said. ‘That must have been interesting…’ [Voice rising at end and tailing off expectantly.]
‘Very.’
‘Oh.’ I said. [Pregnant Pause. Encouraging Smile.]
He was extremely generous with his time, telling me the less savoury aspects of prison life and of the Bird Man, adding at the end,
‘Of course he didn’t have birds when he was here in Alcatraz.’
‘He didn’t?’
‘No. He wasn’t actually the Bird Man of Alcatraz. He had the birds in his previous jail, Leavenworth. But they just ignored that when they were making the movie. It don’t sound so good, does it? Birdman of Leavenworth.’
I agreed it definitely didn’t have the same ring to it.
‘He wasn’t very nice either. He was one I couldn’t feel sorry for.’
‘You felt sorry for these guys?’
‘Oh yeah. Some of them were real bad boys. But others, well…’ 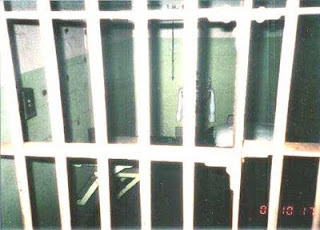 I decided that I’d go inside. Something was fluttering in my mind. I was less intrigued by the high profile inmates than the hapless casualties of society. What about those “others”. Who were they? How did they end up in the most notorious prison in the world?

Entering the main Cell Block. [Deep breath. I can do this. Overcome Fear-of-Enclosed-Spaces by Incoming Story Signal to Brain]
Oh Great Galloping Galoshes! There are so many bolts and bars and locks and heavy metal doors with keys and padlocks and chains and shackles and, and, Quick! Grab earphones and ram on head.

It’s a real ex-con talking! How he hadn’t meant to get in trouble, as a young man he fell in with the wrong crowd, got carried away by the moment. Lying on his cot bed he listens to the mournful honking of the sea lions in the bay and at New Year the sound of revelry being carried across the water. He remembers his childhood.
On my way out I look at the watchtowers and the coils of heavy duty barbed wire and say,
‘I’m not surprised no one ever managed to get out of here.’
‘Some did,’ says the tour guide.
‘Convicts escaped from Alcatraz?’ I ask in surprise.
‘Not escape, exactly,’ he replies.
‘What then?’ My fingers twitch towards notebook.
In the shop I bought the post card. It depicts a jail cell, and below that is written.
Rule Number Five
It is your right to have:
Food, clothing, shelter and medical attention.
Anything else you get is a privilege.
Hey! I thought. I know where that’s going. When I got home I pinned it on our kitchen notice board and pointed to it when any or all of the young adults sharing our house got particularly stroppy. A year or so later the specialist publisher, brilliant Barrington Stoke, phoned and asked if I could write a short book with a direct storyline in a straightforward style that would be of interest to teenagers.
Oh, could I? I know that Barrington Stoke books are incredibly popular especially with our reading-challenged children and EAL students. Librarians, Learning Support teachers, those who work with young offenders can’t get enough of them. So I’m thinking of the subject matter. I’m thinking of a young man lying in his cell. I’m thinking of a break-out attempt. And there’s a story vibrating in my head.
It’s called PRISONER IN ALCATRAZ.
POSTSCRIPT: I’m writing this Blog just after the riots in London and other large UK cities while hundreds of mainly young people are being fast-tracked into our courts and exiting with a criminal record, and I’m deeply concerned about the “others” in our present day society.
Theresa Breslin 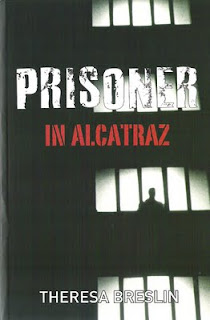 PRISONER IN ALCATRAZ will be read aloud by a reading chain of people who will gather on Friday 19th August for a 2.00pm start at Sighthill Library in Edinburgh in an attempt to break the Guinness World Record for the longest reading chain in the World. Readers and Authors of all ages welcome. Sign up to take part by contacting Sighthill Library. Tel 0131 589 5566 Email: sighthill.library@edinburgh.gov.uk
Hosted by Sighthill Library, Gate 55. 55, Sighthill Road, Edinburgh EH11 4PB
Theresa Breslin is appearing at the Edinburgh Book Festival
19th August 5.00pm with Guy Hollands and Elly Goodman co-directors of the Citizens Theatre production of DIVIDED CITY. Members of the cast will also take part.
26th August 10.30am (Schools Programme) with Karen Cunningham author of THE TWIGHLIGHT ZONE
Posted by Theresa Breslin at 07:37

This is fascinating, Theresa!

How long do you have to read for today? I mean, what's the record you're trying to break?

I went to Alcatraz some years ago. What I found most scary were the sound effects on the headphones. Inmates were yelling at me and banging on the bars as I walked between the cells. In the dining hall the prisoners were banging their tin plates on the table and shouting. Always shouting. It was so realistic that I was relieved to be able to remove the headphones and thanked heaven for a bit of peace.
Interesting blog, Theresa. Good luck with the reading in Edinburgh.

This is a post that will stay with me. I live not far from an inner-city prison. In the wake of recent events, I've been thinking about the 'others' too.

Thanks so so much Caroline getting my post up with the photos too! The Reading Chain Record is 290 sentences read consecutively by one person after another. Sound easy but to qualify officially there is massive amount if paperwork and official rules. And a lot of work to organise 300 people - not helped by the fact that Edinburgh schools close at 1pm today so no handy place to rent a crowd. All praise to Sighthill Library staff, Edinburgh Bookfest, Barrington Stoke and yourself for posting. Theresa x

Timely, thought provoking post and fantastic event this afternoon. I hope all goes well and everyone has a great time.

I visited Alcatraz years ago. Either there wasn't an audio tour then or we passed it up for some reason. The trip across the bay was fun but the prison itself pretty intimidating. Not a place it would be easy to get out of.

Got back late from Edinburgh after an immensely exciting day. Sighthill was a Blast! We didn't break the World Reading Relay Record, but did set the UK one - and also had the most fun reading aloud that I've ever experienced. From babes in arms to great grandparents (see photos on FaceBook and other Internet locations) folk turned up to enjoy sharing a book together and have a good time. And we did. I am so glad I was part of it. Theresa

Like Barbara I so remember the noise and pinched some of it for INSIDE as the boys didn't oblige when I went inside here in the UK. Should say I went to Alcatraz on Theresa's instructions. 'You'll get a book out of it,' she said. It wasn't the book I thought I'd write, but Alacatraz does get a mention when I have a prisoner reading 'a book about Alcatraz.' Guess who that is by! Thanks Theresa.

Thanks Julia - I think INSIDE should be required reading for anyone involved in the recent riots in UK - would make a good short film too!