Easter at the Gibraltar of the North 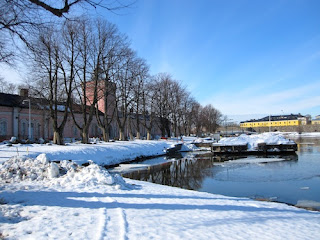 On Palm Sunday small witches were abroad, carrying catkin wands decorated with bright feathers and strips of colourful tissue paper. They knocked on doors and waved their wands at the occupants before moving on. I was mystified. Why were the neighbourhood children dressed like witches and wizards at this time of year?

But then, I am in Helsinki, and along with the familiar chocolate Easter eggs and rabbits, there are other cultural traditions being played out that reflect Finland's past domination by eastern and western powers. The witches, I'm told, came from Sweden and the wands from Russia, mixing together to make an intriguing local custom where costumed witches recite good wishes with their willow wands in return for sweets.

It was cheering seeing children working their way around Suomenlinna, where I have been staying while I write my next book and learn about children's literature in Finland. Spring comes gradually to these exposed islands and the temperature has barely got up to 5 degrees Celsius. When I arrived in mid-March, the ferry ploughed through slabs of sea ice; earlier this year I might have been able to walk across the frozen harbour to Helsinki. Just when one thinks winter has gone, the snow comes again. I have thought, time and again, of how difficult it must have been on these islands during their turbulent past. 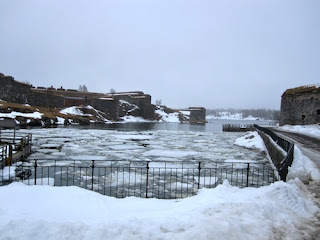 Suomenlinna, which means the "Fortress of Finland", was first established as Sveaborg when Finland was part of the Kingdom of Sweden. Today this rocky fortress is peaceful and quiet, but it was not always so. The story of Suomenlinna is an illustration of how (as my Lonely Planet guide puts it) Sweden and Russia used Finland as their "wrestling mat". Suomenlinna is comprised of small islands joined together by bridges and is a UNESCO World Heritage site as an outstanding example of an 18th century bastion fortress. For an excellent aerial view, click here. It was built by the Swedes when they were no longer a great European power pursuing the establishment of a Baltic sea dominion, and were alarmed at Russia's advance westwards. Peter the Great and his allies had challenged the Swedish empire in the Great Northern War and forced it to hand over southeastern Finland in 1721. By 1743, the frontier between Sweden and Russia had moved even further west and Finnish forts were now on Russian soil. St Petersburg, established in 1703, and its Kronstadt base were too close for Swedish comfort.

In 1747, Sweden decided to locate its main base at Helsinki, a small town of 1500 inhabitants, with the Sveaborg island fortress protecting the waterways. This became the kingdom's largest building project with financial support from France, which had an interest in fortifying Finland against Russia. Sveaborg was built under hard working conditions by Swedish and Finnish soldiers, prisoners and artisans using local materials as well as sandstone and coal imported from Sweden and England.

The mainland fortifications at Helsinki were not completed and Sveaborg became the depot fortress for the army and navy. It accommodated 1800 men in peacetime and by the end of Swedish rule, over 7800 could be housed there. Over the last decades of the eighteenth century, living standards at Sveaborg had developed so much that upper class ladies moved there, bringing Stockholm's society customs with them. The fortress became something of a cultural centre, enjoying literature, music and ideas of the Enlightenment. Some military men even cultivated their artistic sides, most notably Lieutenant -Colonel Augustin Ehrensvärd, the man sent from Sweden to oversee construction of Sveaborg. One of his paintings of Suomenlinna can be seen here.

Sveaborg built up a reputation as the "Gibraltar of the North", thanks to travel books of the time and gave the impression that the fortress was impregnable. Sveaborg had, however, never been completed and was vulnerable from unfortified areas on the mainland. In 1808, the forces of Russian Emperor Alexander I attacked Finland. Sweden, which had concentrated its defences against Denmark, was unprepared and Sveaborg was forced to surrender when the Russians laid siege to it. After centuries of being under Swedish control, Russia annexed Finland and made it a Grand Duchy. 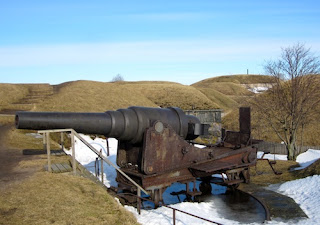 Sveaborg was now a Russian fortress and its mission was to protect the waterways to St Petersburg, but during the first half of the nineteenth century, it was neglected. With the outbreak of the Crimean War, Russia attempted to bolster the islands' fortifications, but in August 1855 the Anglo-French fleet bombarded Sveaborg for two days before sailing off. Sveaborg was rebuilt and went through the rest of the century unscathed. The fortress was now a place where several cultures and religions mixed. A Russian Orthodox church and school were built, along with military hospitals and barracks.

Finland declared its independence in December 1917 and was acknowledged by the new Soviet leadership soon thereafter. A four month civil war followed, pitting Red Guards against Whites and ending with the arrival of the German Baltic division, who occupied Sveaborg in support of the victorious Whites. The fortress was renamed Suomenlinna in May 1918 and became a prison camp for Red prisoners, over ten percent of whom died from starvation and illness before the camp was closed later that year.

In 1919 two of the islands were declared ancient monument areas and care has been taken since to look after the fortifications and preserve their history. Suomenlinna subsequently housed units of the Finnish army and the submarine fleet and served in Finland's air defence during World War II. In 1973 the islands were turned over the civil administration to be maintained as a historic monument as well as a thriving residential community that includes many artists. 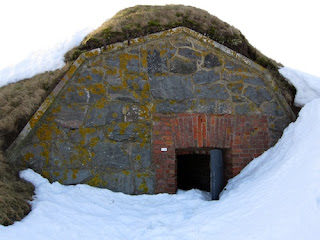 It is impossible to escape the hardware of war here. There are 105 guns or barrels on Suomenlinna, both Swedish and Russian. The ramparts feature huge 19th century breech-loading Russian cannons and a 1930's Finnish submarine sits on the shore. The stone walls are full of dark entrances, tunnels and doors built into hills, some of them still blocked by snowdrifts. To get home I must pass under an arch with a network of open cells on either side and at night it is a creepy journey. One or two Finns have alluded to ghosts on Suomenlinna but wouldn't say any more than that.

There is certainly an atmosphere in some places and at sunset, when the shadows are long, it's easy to imagine a presence nearby. Perhaps it's also because the trees are still bare and the land is a mix of mud and snow. There is a traditional belief that trulli (witches who are the spirits of unmarried women) come out at this moment between winter and spring, flying down from Kyöpelinvuori, Ghost Mountain, to play tricks on humans and take cuttings of cattle fur for their evil purposes. If one stands at a crossroads on Easter Saturday, the witches will apparently whisper one's fortune as they pass by in mid-air.

No wonder the Finns would light bonfires on Easter Saturday to chase the witches away. If it weren't forbidden these days, the Suomenlinna bastions would be perfect locations to build great spring fires. By the time you read this, I will have been up walking on the ramparts, welcoming Easter and shaking my fist, not at the flying witches, but at the falling snow!

Teresa Flavin is a currently a resident at HIAP/Suomenlinna where it has been so cold and snowy she wasn't able to make the outdoor sketch she wanted to for this post. She is working on the final book in her children's historical fantasy trilogy. The previous books are The Blackhope Enigma and The Crimson Shard, published by Templar Publishing in the UK and by Candlewick Press in the USA. You can read more about her Helsinki stay here and here.

Fascinating post - what a wonderful place to explore! I am intrigued by its eeriness... Thank you, Teresa.

What an interesting experience to have! But it's the picture of little witches with willow wands that lingers...

Teresa, Thanks for a glimpse into the past of a part of the world I know very little about. I admire people who lived in such cold and inhospitable places (and turbulent times). Learning about them makes me feel quite priveleged.

Thank you for the nice comments, especially on Easter when everyone was busy! I was pleased to have any at all. :)

How inspirational your stay in Helsinki must be for your writing. Just the experience of living in that degree of cold must be interesting. I love the idea of standing at a crossroads on Easter Saturday and having a witch whisper your fortune as they pass by in mid-air...