A Sterkarm's breakfast by Susan Price

(One in a series of occasional posts from History Girl Associates. Susan Price gives us a wonderful glimpse of the past through a 21st century breakfast tray.)

When I visit schools, or give other talks, I often read a particular scene from my book, The Sterkarm Handshake. It’s an everyday tale of time-travelling folk and, in this scene the young 16th century reiver, Per Sterkarm, has been badly wounded, and brought to a 21st century hospital.

While there, he’s presented with breakfast in bed. The scene was inspired by my realisation that there wasn’t a single thing on a typical 21st century breakfast tray that he would recognise. Since he believes he’s in Elfland, where no mortal who wishes to escape must eat or drink, he is doubly determined to resist all offers of food. 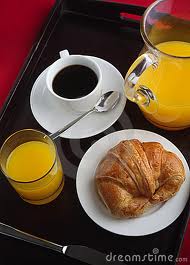 The heroine, Andrea, offers him a croissant, which he sees as being like‘...like a large, fat grub with a ridged body…’ He dislikes its yeasty smell. At home in the 16th Century, on what is now the Scottish- English border, he would have eaten rye bread, oatcakes or flatbread, which was rather like crispbread and could be stored by stringing it from ceilings. Research brought home to me how restricted food was, in the past, by locality and season. Per eats oats and rye, because that was the grain best suited to the north before the agricultural revolution.

Andrea tries to make the croissant tempting with butter and jam, but the butter is yellow, and wrapped in foil and, to Per, ‘butter was white and hard and came to table in big lumps inside a crock.’ We think of butter as yellow because most of our butter is coloured.

The jam is even less of a hit. Since Per suspects the greasy Elvish ‘bread’ is made from men’s bones ground to flour, he is equally suspicious of this bright red goo. In the early 16th century, sugar was still a very expensive spice, since it wasn’t yet produced in bulk. Down south, rich show-offs may have been blackening their teeth with it, but I doubt that Per, in his god-forsaken ‘debateable land’ would have seen much sugar, or even have heard of jam. I wonder if our description of lucky people as ‘jammy’ is a reflection of this rarity value?

Per rejects, with disgust, a bowl of popping, snapping cereal, which he suspects of being hatching insect’s eggs, and so Andrea offers him a glass of orange juice.

Per admires the clear, straight-sided glass, and wonders if he could get it home to the 16th without breaking it. His mother has no glasses so fine. He also thinks the bright colour of the juice beautiful, as it reminds him of the ‘old story about a beautiful woman whose tears were liquid gold.’ (The goddess Freyja, remembered in folklore.)

Andrea hopes that he may have seen an orange ‘strung on a ribbon and stuck with cloves’. She tries the older form of the word: narange. There’s no response. Per’s never seen or heard of the fruit. Hardly anything in his world would have been that colour, or that bright. In his time, even carrots were dark purple or white. It’s telling that our name for the colour is the name of the fruit.

There is one last thing left on the tray. ‘It was long, thick, curved and as yellow as a coltsfoot flower. [Per] leaned to the left and right as he peered at it. He had no idea at all what it could be…

‘Andrea picked up the yellow thing. Curiosity silenced Per. He watched as she pulled at the thing’s top. The yellow came away in a long strip, white on the inner side. Long, sprawling white and yellow legs fell over her hand, leaving a white, curved stem standing up. It was like a dead man’s…

‘She broke off the pointed tip. He was surprised to see how easily it broke. Before his eyes, she put the tip in her mouth and ate it. “Try some…”

‘He shook his head. 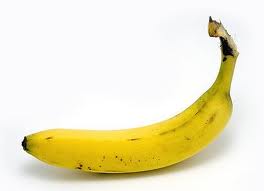 The schoolchildren I read this to are highly amused, but find it hard to believe that Per would never have seen one of these unco elvish fruits, when they have them in their lunch boxes and can buy them at any corner grocery. I tell them that, in Per’s time, I doubt that either the English or Scottish king would have seen one.

I find it fascinating that a breakfast tray can give us a glimpse of another world. 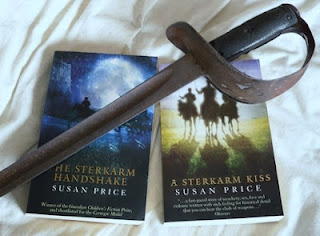 More about the Sterkarm books can be found here: http://www.susanpriceauthor.com/books-by-susan-price/books-for-adults-and-young-adults/the-sterkarm-books/

Susan Price is one of the blog-team at Do Authors Dream of Electric Books? http://authorselectric.blogspot.co.uk/ Her own blog is at http://susanpricesblog.blogspot.co.uk/

Louisa Young will be rejoining us soon
Posted by Mary Hoffman at 01:01

Terrific! Poor Per - what a nice breakfast he missed. I had no idea that butter didn't use to be yellow, or that carrots weren't orange - where did you find such things out?

I've had dark purple carrots in India and from an Asian shop in Brussels. They didn't look at all tempting, being knobby, thin and tough looking. Tasty when cooked though, and definitely carrot flavour, but not as crunchy as modern ones. Great post Sue!

On bananas, I remember a Tudor one on show at the London Museum some years ago:
http://news.bbc.co.uk/1/hi/uk/370550.stm

I so loved the Sterkarm books, and it was a great pleasure to be reminded of all the sexy humour in them. Thank you.

I seem to remember that Jeanette Winterson having un with a pineapple in Sexing the Cherry?

sorry, that should be 'fun' not 'un' with a pineapple.

I would always have "un" with a pineapple. I am an un-pineappled person because they hurt my mouth.

I loved this post almost as much as I love Per Sterkarm. Thank you, Sue!

Thank you all very much!
And a Tudor banana?! I had wondered, because the Tudors were certainly getting about - but I set the Sterkarms in roughly 1520-ish, which was pretty early - and the debateable lands were a benighted, poor, backward place at the time. So I stick to it - Per would know nothing of sugar, bananas or oranges, however much these things were being scoffed in London.

I can't remember where I read of purple carrots. I come across and remember all kinds of odd little facts like that, which I remember for years, while forgetting everything useful. I did come across a website of carrot history the other day - what the web was built for - which said that before the 17th Century carrots could be purple, white or yellow, but not orange. The orange ones were developed at about that time, and became so popular that it was forgotten that they were ever any other colour. It seems the purple ones are making a comeback as a novelty, though, so perhaps in a while the orange ones will be forgotten. Funny old world.

Danish butter is still white, though very salty! My mother liked Lurpak, because it was most like the German butter she was used to. I believe it's just made in a different way to our yellow butter. Doesn't Laura Ingalls Wilder talk about her mother colouring butter yellow with carrot? My mother was convinced English butter, in the 50s, was dyed. Maybe it was in those days.

Supermarkets have a lot to answer for! It might have been even more amusing if Per had tasted these things. I've had criossants that look beautiful but are like wallpaper paste inside, bright orange juice that tastes like something you'd put down the toilet, and bananas that look OK but are black down the middle and hard... um, what did Per think that peeled banana looked like, again...?

I'm sure I couldn't say, Katherine! It was published as a Young Adult book, and I was cautioned that younger children might read it.
About the butter - I've read that two kinds of butter and cheese were made. One was for eating immediately - the cheese was rather like what we call cottage cheese. The other kind was salted, and made to be kept through the winter months. This was the hard cheese and the hard, white butter. The butter for immediate eating may have been more yellow - I suppose it depended on how much cream was in it, and how yellow the cream was. But a great deal of modern food is coloured, to make it the colour we expect it to be. Even the greengrocery section of supermarkets has coloured lighting, to make the produce look brighter and greener!