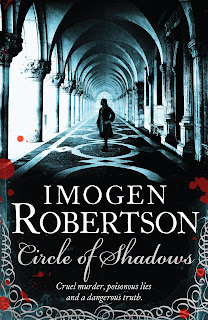 Research for a historical novel can take you to some interesting places, no doubt about that, and it also gives you a chance to explore in depth those interesting shreds of knowledge that hang about in the back of your mind and contextualise them. Before writing Circle of Shadows I knew that Newton wrote more on alchemy than on gravitation, and that the skills learned, and discoveries made in pursuit of the philosopher’s stone laid the practical foundation for what became the science of chemistry, but that was about the limit of what I knew. Writing my novel gave me a chance to delve a little deeper into alchemy and see to what extent the symbols and ideas of this ancient proto-science / philosophy are with us still.

The pursuit of alchemy was always a spiritual as well as a practical search. It arose out of both a search for the secret knowledge of the ancients, and an attempt to understand and explain the world through a complex symbolic system of harmony and transformation. That leads to a lot of very beautiful pictures, many of which can be seen here. I love the dualism of alchemy driven on one side by physicality, by intellectual material curiosity, and on the other side by a tradition of mysticism and contemplation, the idea of converting the base stuff of our human nature into spiritual gold. Then of course the use of alchemy by any number of charlatans over the centuries brings the base and the golden together rather poetically. The Bruegul picture below shows you something of the two-headed (two-faced) element of Alchemy. You can see the scholar at his books on one side, and the man toiling at his fires on the other, not to mention the general chaos that the obsession has caused in the household. 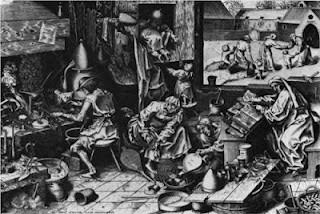 The key text of alchemy, The Emerald Tablet, was supposedly written by Hermes Trimegistus (a combination of the gods Hermes and Thoth) and found its way into Spain in the 12th century in a translation from the Arabic as part of the Secretum Secretorum.  You can read Newton’s translation here, but to give you a flavour: ‘that which is below is like that which is above’, or as a snappier translation has it. ‘As above, so below’, and ‘The sun is its father and the moon is its mother, the wind hath carried it in its belly, the earth its nurse…’ It’s really rather lovely, though admittedly not much of a practical guide, but it shows how alchemy was always closely linked to astronomy (as above, so below), and to the properties of minerals, salts and plants (the earth its nurse) so studying alchemy is an interesting way to explore the renaissance mind in general. 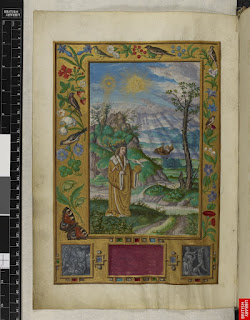 The tablet was only one of many texts from the period and throughout the renaissance that claimed to offer up to the worthy reader the secrets of alchemy. The Corpus Hermeticum began appearing in early printed editions in the mid sixteenth century was a collection of these writings, dialogues mostly full of hints and suggestions. Plenty of the renaissance grimoires, books of magic, show you what spirits to summon to help you in your alchemical work too. Check out The Book of Abramelin for all your other worldly servant needs. Abramelin also gives you instructions on how to make a dead man live for seven years, handy as he says if the heir to an important throne is a minor, and there are hints in the Corpus Hermeticum which I found very useful (in an imaginative sense) about fixing a spirit in statues and so allowing them to move. These are the books that inspire and seduce my 18th century alchemist and their ability to continue to fascinate is remarkable. This image is from another key text, by the way, Splendor Solis of 1582

What I wasn’t expecting though when I began reading up about renaissance magic and alchemy was that I’d develop an even deeper respect for J. K. Rowling. I’ve loved the Harry Potter books since they came out, but it’s only after drinking in these volumes of the esoteric that I’ve found just how many of the names, stories and legends in her novels are firmly based in traditions of magic going back a thousand years. She obviously does her research, and that confirms my own feeling that the better the research, as long as it is worn lightly, the better the book. Her knowledge of alchemy certainly created a great deal of gold, in fact, thinking about it she may be the leading alchemist of our age.
Posted by Imogen at 00:01

Great post, Imogen. I've always been fascinated by the connection between alchemy and psychology - and indeed writing, since the archetypes link us all.

That's a wonderful site you've linked to as well. I've a horrid feeling I'm about to get sucked in...

Re Rowling - I have been annoyed for some time, though, that if you search for Nicholas Flammel you are more likely to get links to HP stuff than to the real NF!

I did a lot of medieval science as part of my PhD work and the marriage of physical and metaphysical suffuses all their scientific thinking. Right back to Isidore of Sevile (and ealier) the whole of the physical world was thought to figure divine mysteries. The nature and behaviour of things was supposed to direct us to their purpose and to understanding the divine. Alchemy, I suppose, was the practical bridge. Can't wait to read what you've made of this and Newton.

Brilliant subject for a book - looks really exciting! It's strange to think of Newton doing alchemy. Didn't he set fire to his rooms in Oxford at one point with his efforts to extract gold from base metal?