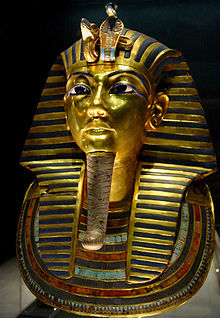 I’ve been fascinated by the mysteries of Ancient Egypt ever since I read these immortal words in H Rider Haggard's "She" as a child:

I, Amenartas, of the Royal House of the Pharaohs of Egypt, wife of Kallikrates (the Beautiful in Strength), a priest of Isis whom the gods cherish and the demons obey, being about to die…

and plunged into an adventure that still stirs my blood today. Later, I devoured Wilbur Smith's historical novels, and have since enjoyed countless other books and films inspired by Egypt's mysteries.

Any society that can inspire so many stories after 5000 years must have had serious X-factor! So what would the judges make of the ancient Egyptians?

Pyramids. The largest of these was the Great Pyramid of Khufu, one of the Seven Wonders of the Ancient World. Undoubtedly magnificent, it still stands at Giza more than four thousand years later, although it has lost its dazzling white limestone render and the gold peak that possibly crowned its top. The pyramids have inspired many books, including Terry Pratchett's alternative Discworld version. A solid 10 points for the pyramid builders!

Mummies. The ancient Egyptians had embalming down to a fine art. By extracting the organs and storing them in jars, and wrapping the body in bandages, they managed to preserve their dead for thousands of years, giving Egyptologists plenty of material to study and inspiring films like The Mummy.
8 points to Tutenkhamun for being the most famous mummy (he loses 2 for being rotten when he was unwrapped).

Book of the Dead. A collection of spells written in hieroglyphs on the walls of tombs, this is the ancient Egyptian handbook for guiding the souls of the deceased into the afterlife. Used to be called the “Book of Coming Forth by Day”, which is much more optimistic in my opinion!
9 points to the priests (they lose one because nobody has come forth to tell us if their spells worked... yet).

Amulets. The ancient Egyptians wore amulets such as the ankh (= "life") and the Eye of Horus to ward off bad luck. You can read all about Ancient Egyptian magic in EA Wallis Budge's book.
1 point for being superstitious plus 9 points for luck.

Gods. The Egyptians liked their gods! From jackal-headed Anubis who guided the souls of the dead on their journey, sexless Hapi of the Nile, the ugly dwarf-god Bes, beautiful Isis the mother of Horus, Khnum who created children and kas on his potter’s wheel, to the sun god Re/Ra... there’s a whole pantheon of them to choose from, inspiring books such as Rick Riordan's Kane Chronicles series for children.
10 points to Osiris for being king of the coolest gods in the ancient world.

The River. Without the Aswan dam, the Nile flooded every year. Sometimes high, sometimes low, the floodwater carried fertile black silt across the banks, and when it receded the ancient Egyptians farmed the narrow strip of land between the river and the desert, and grew enough crops for the Romans, later, to treat Egypt as their bread basket. The height of the annual flood was so crucial to the economy that Pharaoh, after dreaming of seven fat cows and seven thin cows, freed a Hebrew slave called Joseph to handle the crisis.
10 points to Joseph for food rationing.... and a bonus point for inspiring Andrew Lloyd Webber’s Amazing Technicolour Dreamcoat.


Alexandria. The city founded by Alexander the Great on the coastal delta was the home of Cleopatra, the last queen of Egypt, and the setting for Shakespeare’s play about the doomed lovers Anthony and Cleopatra. This city may not be as ancient as the pyramids, but it was home to the Pharos lighthouse (another of the Seven Wonders of the Ancient World), and its crossroads became Alexander’s resting place after his body was brought back from Babylon.
9 points to Alexander for visionary city planning (he loses one point for not returning alive to see it).

Two of my Seven Fabulous Wonders books are set in Ancient Egypt:

Alexandria provides the setting for The Cleopatra Curse, where the Romans persuade lighthouse slave Zeuxis to drive their chariot in the Hippodrome with the aim of creating a diversion while they invade Queen Cleopatra's Egypt. Two thousand years earlier, in The Great Pyramid Robbery, the workers building the second pyramid at the Giza hatch a plan to steal the treasure buried inside the great pyramid and persuade young Senu and his otherworldly ka Red help them get past the curse on the tomb:

"I, Khufu, Lord of the Two Lands, made this tomb in a pure place where no-one had a tomb, in order to protect the belongings of one who has gone to his ka. As for anyone who might enter the tomb unclean and intending to do evil, the Great One will judge against him..."
(Hmm, maybe H Rider Haggard had more influence on my work than I thought!)
It's impossible to do justice to a five thousand year old society in a single blog post, and I expect you've got your own favourite Ancient Egyptian book/film… tell us below.

Very hard to choose. I don't know which of those will get my vote. Possiblyl Alexandria but I reckon Pyramids are pretty damn fine too. Lovely post.

Fantastic post! I'm afraid I laughed aloud while I was reading it - especially at Tutankhamun losing two points for 'being rotten when he was unwrapped'...

Unfortunately I'm an H. Rider Haggard freak too, so I'd probably have put 'She' as my own favourite. But one very much neglected work is Agatha Christie's 'Death Comes As The End' - arguably the first true 'historical' detective novel. It's not great writing, but I remember she based it on two actual letters her archaeologist husband showed her, and they made the whole world come alive.

This reminded me of reading 'She' for the first time; it was an old copy, and it wasn't until I got to the end that I realised there were several pages missing! Oh, how I howled!

Paul Mercurio (of Strictly Ballroom fame) made for a decent Joseph in the 1995 TV movie, Joseph in Egypt. I'd recommend it; not only do they have the budget to do the Biblical story justice, they cast Ben Kingsley as Potiphar and he's excellent in the role.

Ah yes, Agatha Christie also did a Poirot story "Death on the Nile"... her work gets a lot of exposure around here because of Greenway, her holiday home on the River Dart.

I've been inside and seen her first editions and her typewriter and all the cuneiform tablets etc. from her husband's excavations, and also heard her voice on tape in the drawing room talking about her writing... really spooky!

Oh, Terry Pratchett every time! he has a knack for pinpointing the essence of a civilisation, exaggerating it and then making it hilarious. I wonder if he'd consider doing something on coalition givernments to cheer us all up?

I know I am late to the game but just read your post about Ancient Egypt. Love your Tut comment! I'm currently in the thick of writing an 18th Dynasty novel so I'm always on the look out for blog posts about my favorite subject. Or at least one of my favorite subjects. Horses being the other and I see from your website that you write about horses! Yippee! The little girl comes out in me everytime I see a new title. Can't wait to download and real all of yours!