GRAVESTONES AND EPITAPHS by Mary Hooper

When we moved to our present house I was very happy to find that it overlooked a church, because one of my favourite things to do is trail around a churchyard reading the epitaphs on the stones. I don’t much like new graves, mind you, I find them too stark and shiny, too suburban. What I like are mouldering stone, avenging angels, covered urns and broken columns with a few twists of ivy – just enough to reveal an epitaph which will give a frisson of fearful anticipation. 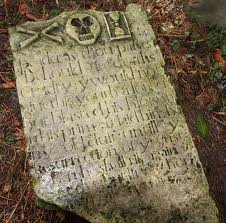 
In Dorchester-on-Thames, close to where I live, a stone in the floor of the abbey commemorates Sarah, who “sank and died, a Martyr to Excessive Sensibility”. For ages I wondered what happened to her, how this sensibility had manifested itself enough for her to die of it, and then a passing verger told me that the poor girl had committed suicide on learning of her husband’s infidelity. Also in  Dorchester Abbey, the meanness of a man was recorded thus:


Here lies one who for medicine would not give
A little gold, and so his life he lost
I fancy that he’d wish again to live
Did he but know how much his funeral cost.


In Malmesbury, Wiltshire, I found a headstone to commemorate Hannah, who was attacked by an animal which had escaped from a travelling circus. 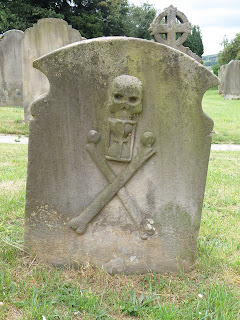 In bloom of life, she’s snatched from hence
She had not room, to make defence,
For tyger fierce, took life away,
And here she lies in bed of clay.


Visiting friends in Great Bedwyn, Wiltshire, I was enthralled to see a whole host of memorials in the front “garden” of a monumental mason in the high street. Some are copies made of local stones with their original, brightly coloured decorative designs restored. I particularly liked this memorial to the local innkeeper:

Resigned upon the heavenly will.

The earliest tombs to be found in churches are those from the twelfth century. These were simple stone slabs commemorating church dignitaries (at that time the only people allowed to be buried inside the church). The following century brought recumbent effigies of the lord of the manor and his lady, complete with colourful heraldry and Latin inscriptions.


Throughout the Middle Ages it was only the very wealthy who had memorials. The poor were simply buried in the churchyard, one on top of another. This has raised the level of many old churchyards to several feet above the ground, as well as covering the lower courses of the walls of the church itself. In Pepys’ church, St Olave’s, near the Tower of London, one can see the grassed earth has formed into large hillocks on each side of the pathway to accommodate the masses who died in the Great Plague. 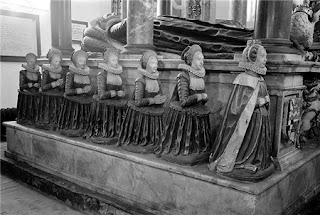 Churchyard tombstones came into more common
use from the 17th Century onwards. During the Elizabethan age, England had developed into a prosperous nation, with a middle class who could afford the luxury of commemorative monuments. The richer they became, the more lavish a display they made. Particularly wonderful are the intricately carved and heavily gilded resting places of  wealthy Elizabethans, like the awe-inspiring Knollys tomb in Rotherfield Greys church, just down the road from me.  Here you can admire the lavish salutations, shiver at the spooky cherubs, count the children ranged each side of their mother and father (and note, from those holding skulls, how many died young).


Most people are cremated these days and even if they aren’t, their memorial stones are sadly plain: just oblongs all-in-a-row.  No headstones telling of their attributes, no skeletons or gothic embellishments, no wise epithets or inducements to be good, just names, dates and Sadly Missed. I believe there are even laws now on what you can and can’t have inscribed.  I’m certainly not being buried (how could I, after writing NEWES FROM THE DEAD?) but if I was, I would plump for the following jolly ditty: 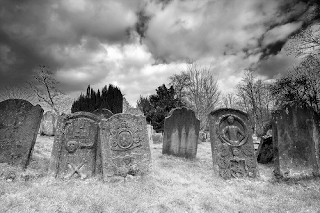 As I am now, so you shall be;
Therefore prepare to follow me.
As God can quickly stop your breath
Prepare! Prepare for sudden Death.
Posted by Mary Hooper at 01:30

This post is ideal for a sunny Sunday morning. Love it! I too am very fond of graveyards and tombstones. Thanks, Mary. Love that first poem...and the pix.

Fascinating - and that last picture in particular is chock-full of atmosphere. (Chock-full? Don't think that can be right...)I do agree about modern tombstones - I don't understand why there are all the regulations about what you can and can't have.

Great photos - especially the last one. :-)

Last year, on the Welsh coast, I was looking at the graves surrounding a lovely little chapel overlooking the sea. Most of the graves were in Welsh, which I can't read, but the English ones, both ancient and modern, were all along the lines of "Life was tough, dead at last." It jarred with being in such a beautiful place, in a beautiful part of the world, but it seemed the local convention (unless local people were an inherently miserable bunch).

One of the more modern ones implied an extremely long and arduous life, with death being a very welcome relief, and this was a fifty year old woman! I mean, she might have had a terribly tough life such that fifty years seemed like an overlong innings, but it seemed tragic that this was all that could be said about her.

On modern graves, my boyfriend took this photo a few years back in the local modern cemetery - that scene certainly tells a story.

Great poat and photos.
I love graveyards too. I took an English friend into a Danish graveyard on one of the islands once and he asked why all the people on that island had been called Fred. Uh. Because that's the Danish word for peace. :-) Standard inscription, it seems.

I love old gravestones! Today they're sanitised by having to be a certain size & colour etc. It seems we're dictated as to how our gravestones can be. Yet the best graveyards & cemeteries are where the gravestones are all different.

Having done a lot of research on my family tree, I love to look at the different gravestones and inscriptions. I like the ones you've pointed out here. :)

I love this post, too! I've loved exploring graveyards & reading the epitaphs since I was a child. Thank you, Mary.

I love old graveyards too, for the very same reason. I've taken pictures of them--which earned me the epithet "wierd"... well, one of the reasons *wink*

Yes, great post and pictures - the last one is particularly fine, and the Elizabethan tomb is fabulous. My children's primary school necessitated a daily walk through a cemetery and I grew to love the inscriptions and the tiny clues it gave you about a life and a death. One, in particular, was intriguing: it simply read, if memory serves,
God forgive
Michael S...
I like your final ditty, too. Thanks, Mary.

Great post. I usually enjoy a mooch round a graveyard, but had a nasty experience on the Welsh borders in, I think, Burntisland. I found that very nearly every grave was of someone named Price...

Love the epitaph! The mean man's tombstone makes me think of George Brassens's song against the man who finally 'fell victim to a critical indigestion/ and refused the care of medical therapy/because it was a German who had manufactured the medicine.'
'Il tombait victime d'une indigestion critique/et refusa le soin de la therapetique/ parce-que c'etait a un allemand/ Oh gai! Oh gai!/ Qu'on devait le medicament/ Oh gai! Oh gai!' Brassens didn't think much of patriotism.. Sorry for poor translation and lack of accents in the quote, can't get them here - the accents, I mean. I agree, old gravestones are far more interesting.

Like the one to a man whose name I forget now, in Sonning-on-Thames churchyard. 'He loved and served sailors.' H'mmm..

My favourite stone is in Strata Florida Abbey: "Here lies the left leg and part of the thigh of Henry Hughes Cooper".

(The rest of him went to America).

Thank you so much for all your comments. I have been away this week - in Switzerland - where my first call was to the graveyard of the village we were staying in. These were different in a lovely way: mini-gardens with rockeries and alpine flowers.

Great post and pictures. This blog is a great combination of suitable and useful information and well-written sentences that will certainly attract your sense towards Gravestones and Headstones.