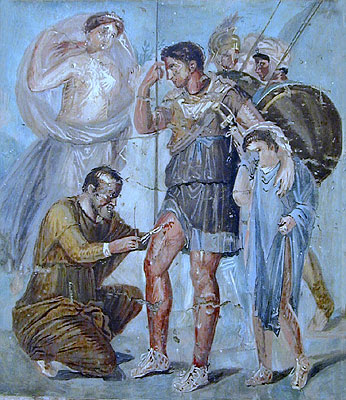 Since my last post I have been exercised by the history of medicine. I don’t intend to write a book about it, but since my youngest son broke his tibia and fibula I have had the opportunity to observe the devastating impact of such an injury at first hand. The first thing to note is that it hurts - a lot. It always has. Juice of the poppy was known to the Romans, and more morphine based drugs still seem to be the most effective form of relief for really serious pain. Anaesthesia is new however. Apparently ether was first synethised in the eighth century, was known to cause chickens to fall asleep in the thirteenth, but it wasn’t until the nineteenth that it was put to use as an aesthetic even though even though such eminent scientists as Boyle, Newton and Faraday explored its properties; it goes without saying that none of these men experienced childbirth perhaps none of them ever broke their leg either. It was a similar story for nitrous oxide: Humphrey Davy writing in 1798 noted that it destroyed physical pain and ‘may probably be used with advantage during surgical operations.’ It was the best part of the century before anyone did. Apparently no one is entirely sure how anaesthetic works - only that it does - thank God. Bone setting has been going on for centuries and has always hurt!

A druid's pack discovered in Colchester contains implements for bone setting while the Romans regularly reset bones and built prosthetics - such regular conquest does tend to produce injury. Some of the approaches seem unlikely to be successful: as Cato the Elder wrote in de Agrigultura,160 'Take a green reed four or five feet long and split it down the middle, and let two men hold it to your hips. Begin to chant: "motas uaeta daries dardares astataries dissunapiter" and continue until they meet. Brandish a knife over them, and when the reeds meet so that one touches the other, grasp with the hand and cut right and left. If the pieces are applied to the dislocation or the fracture, it will heal. And none the less chant every day, and, in the case of a dislocation, in this manner, if you wish: "huat haut haut istasis tarsis ardannabou dannaustra."
Resetting bones when powerful muscles contract requires strength as well as power and the village blacksmith apparently often doubled as the bone setter. Complex fractures however would have resulted in the amputation of the affected limb in every century as there was no way of preserving blood flow, which is why I am particularly grateful to one Abramovich Ilizarov who designed a new kind of treatment in the 1950s inspired by the shaft bow of a horse carriage.

Although this looks like an instrument of torture from the middle ages I am assured that it is a very effective treatment for the repairing of complex breaks...
Posted by Nicky at 09:20

I'm wondering whether, from a Christian "pain and retribution" point of view,it was considered wrong to dull the pains of childbirth?

Hmmm - I wonder if the fact that we have more women doctors (ie, those who know about childbirth pain) now will improve research into pain management? And perhaps we should encourage the wives of medical researchers to squeeze their spouse's hands really, really hard when in labour?