The Ghost That Spoke Gaelic - by Katherine Langrish


It was 1749, just four years after the failed Jacobite rising, and the defeat of Bonnie Prince Charlie and the clans at the Battle of Culloden. Reprisals had been severe; the wearing of kilt and tartan was forbidden; the rising was still fresh and sore in everyone’s minds and by no means necessarily still over. Messages (and money) flew between the Prince in exile and his loyal supporter Cluny MacPherson, in hiding on Ben Alder.

Into this volatile, still smouldering arena marched, in summer of 1749, the newly married – and, it has to be said, completely and complacently naïve – Sergeant Arthur Davies of ‘Guise’s Regiment’, in charge of a patrol of eight private soldiers, heading over the mountains from Aberdeen to Dunrach in Braemar, for no more interesting purpose than to keep a general eye on the countryside.

This kind of countryside... 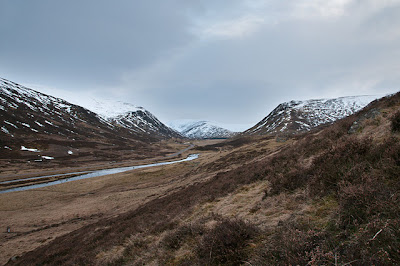 Sergeant Davies was a fine figure of a man, but not at all sensibly dressed considering what he was about. He carried on him a green silk purse containing fifteen and a half guineas which he had saved; he wore a silver watch and two gold rings. There were silver buckles on his brogues, two dozen silver buttons on his striped ‘lute string’ waistcoat; he had a silk ribbon to tie his hair, and a silver-laced hat. Thus attired he said goodbye to his wife, who never saw him again, and set off – encountering on the way one John Growar, in Glenclunie, whom he told off for carrying a tartan coat. And shortly after this, the over-confident Sergeant left his men and went off alone over the hill, to try and shoot a stag.

And ‘vanished as if the fairies had taken him’. His men and his captain searched for four days, while rumours ran wild about the countryside that Davies had been killed by Duncan Clerk and Alexander Bain Macdonald. But no body was found…

Until, in June 1750, a shepherd called Alexander MacPherson came to visit Donald Farquharson, the son of the man with whom Sergeant Davies had been lodging before his death. MacPherson, who was living in a shepherd’s hut or shieling up on the hills, complained that he ‘was greatly troubled by the ghost of Sergeant Davies’ who had appeared to him as a man dressed in blue and shown MacPherson where his bones lay. The ghost had also named and denounced his murderers – in fluent Gaelic, of which in life, Sergeant Davies had of course not spoken a word… But Farquharson accompanied MacPherson, and the bones were duly found in a peat-moss, about half a mile from the road the patrol had used, minus silver buckles and articles of value. The two men buried the bones on the spot where they lay, and kept quiet about it.

But of course the story spread. Nevertheless it was not till three years later, in 1753, that Duncan Clerk and Alexander Bain Macdonald were arrested for the Sergeant’s murder on the testimony of his ghost. At the trial Isobel MacHardie who had shared shepherd MacPherson’s shieling during the summer of the ghost, swore that ‘she saw something naked come in at the door which frighted her so much she drew the clothes over her head. That when it appeared, it came in a bowing posture, and that next morning she asked MacPherson what it was, and he replied not to be afeared, it would not trouble them any more.’

Apart from the ghostly testimony, there was plenty of circumstantial evidence to convict the murderers. Clerk’s wife had been seen wearing Davies’ ring; after the murder Clerk had become suddenly rich. And a number of the Camerons later claimed to have witnessed the murder itself, at sunset, from a hollow on top of the hill: they never volunteered an explanation of what they themselves had been doing up there – doubtless engaged in the illicit business of smuggling gold from Cluny to the Prince.

Things looked black for the accused murderers. Yet a jury of Edinburgh tradesmen, moved by the sarcastic jokes of the defence, acquitted the prisoners. They could not take the ghost story seriously - not necessarily because it was a ghost: though scepticism was on the rise, ordinary people were still superstitious: the last Scottish prosecution for witchcraft had been only in 1727.  But they could not believe in a ghost which had managed to learn Gaelic.

Andrew Lang, in whose ‘Book of Dreams and Ghosts’ I came across this tale, adds a postscript sent to him by a friend: the words of an old lady, ‘a native of Braemar’, who ‘left the district when about twenty years old and who has never been back’. Lang’s friend had asked her whether she had ever heard anything about the Sergeant’s murder, and when she denied it, he told her the story as it was known to him. When he had finished she broke out:

“That isn’t the way of it at all, for… a forebear of my own saw it. He had gone out to try and get a stag, and had his gun and a deerhound with him. He saw the men on the hill doing something, and thinking they had got a deer, he went towards them. When he got near them, the hound began to run on in front of him, and at that minute he saw what it was they had. He called to the dog, and turned to run away, but saw at once he had made a mistake, for he had called their attention to himself, and a shot was fired after him, which wounded the dog. He then ran home as fast as he could…”

But at this point, the old lady ‘became conscious she was telling the story,’ and clammed up. No more could be got out of her.

What a skein this is of tangled loyalties and hatreds, of secret goings-on in the heather, of rebellion and politics, of a murder where the whole countryside knew straight away who’d done it, but wouldn’t - or dared not - say; of a ghost’s evidence, and of poor, foolish Sergeant Davies in the middle of the Highlands, four years after the ’45, behaving as though it was an adventure playground through which he could strut in his finery and shoot at stags... What a lesson for more recent times too, in places where foreign troops attempt to patrol wartorn countrysides riven by conflicting loyalties and fears.

And how ironic that the very ghost story which brought the murder to light – almost certainly devised by Alexander MacPherson in order to denounce the murderers without bringing unwelcome attention upon himself – seemed so incredible to a Lowlands jury that they would not convict.

What a terrific post! Love this story and am so fond of Andrew Lang and all his works. Genuinely thrilling and exciting! Spoooky! And love the reason for that acquittal. Most logical.

Fantastic story and, like Adele, I was particularly tickled by the jury's refusal to believe that a ghost could learn to speak Gaelic. It would make a great radio 4 afternoon play...

Wonderful story, Kath, and such a tangle of "truths" behind it!

(Did not know of the Lang book, but do now!)

Brilliant story - and beautifully told! I love your 'cut' to the picture of the countryside.

Count me as another who didn't know the Lang book, and will now have to seek it out...