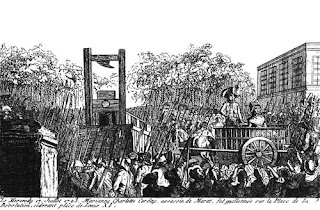 I am writing this a few days after having finished the first draft of my next book. A few months ago said draft was just a synopsis that sounded fine in theory. Today it is a complete, though rough, manuscript. A few weeks from now I will have the measure of it from my excellent editors and will spend the summer rejigging and polishing it.
I always get a little starry-eyed at the end of writing a first draft because it's still a relatively new experience.  At first the task seems insurmountable, but after many days of keeping my posterior bolted to my chair and getting the words down, somehow it takes shape and there is, hopefully, a story that will work. A novel doesn't develop on the page like an illustration, which I can see growing all at once, but it requires the same hard work and determination.
When I was entering the last few days of writing, I mentioned to a friend that I was about to go en charrette, 'on the cart', to finish the draft. When I got a blank look, I explained that this was the term we used in art school to describe the frantic period just before a deadline. I remembered, with a mix of dread and nostalgia, these regular descents into periods of nonstop work, where day blended into night and all that mattered was having your work pinned up by 9am on deadline day so it could be critiqued. These reviews, especially at the end of the academic year, determined whether you progressed or not.
I don't recall where we learned the term en charrette but most likely it came from our professors, who had undergone the same process during their training. There was something quite exotic about having a French phrase to describe the exquisite creative torture we were all going through. It also fit in very nicely with our image of the charrette as transport to one's execution by guillotine, though the phrase actually refers to carts that carried large works from students' studios to the École de Beaux-Arts in Paris for assessment. Today charrette also can refer to collaborative brainstorming sessions held by architects and planners to involve stakeholders on a proposed project.
In his 1886 novel The Masterpiece, Émile Zola described the activities of sixty Beaux-Arts architecture students 'who, being behind time, had to knock off the work of a week in a dozen hours' on the 'night of heavy toil'. This will sound horribly familiar to anyone who has procrastinated on a project, but the similarity probably ends when one reads that the students fortified themselves with viands and cheap wine, the companies of ladies and a smoking competition to aid them in their work. Some might argue that this sounds far more interesting than twelve hours in the company of black coffee and take away meals. When the charrette arrived, the students piled their work on it and those who hadn't finished would climb on and keep working as their fellows pushed it noisily through the streets.
Being en charrette at art school built camaraderie and a gallows humour, but it was an experience I didn't want to repeat too often in my professional career. There have certainly been times in my illustration practice when I worked for very long hours at the end of a project and I was once caught touching up a piece as the courier arrived to ship it overseas. But the biggest lesson the charrette taught me was to break down creative projects into manageable pieces, to schedule as realistically as possible and to do the work according to plan. I don't always get it right, and sometimes life sends problems that throw plans off course, but I keep trying.
The charrette symbolises one other important thing: the quest to make the writing or the artwork just that bit better, even at the last minute. I might drive myself slightly crazy and spend too long tweaking, but in the end it's worth every minute on that cart.
Teresa Flavin is the author of The Blackhope Enigma and The Crimson Shard, art historical fantasy novels for young readers published by Templar Publishing in the UK and Candlewick Press in the USA. She is currently working on the final book in the trilogy.

My dad, who is an architect and studied at Ecole des Beaux Arts in Paris, is well used to the term.
When they had to present their designs for review, they used to have to load their huge canvases on hand drawn carts, that they rented or borrowed for the purpose. The newbies of each class would then drag the carts into the the school courtyard, hence the expression "Charette au cul, les nouveaux".
Most students would study but also sell their work to elder architects (a learning method of some sort too), meaning they would only complete their own school assigments at the last minute.
I can also confirm the gallow and ribauld sense of humour, still in place in the early 60s.

That's wonderful! I think it's great that there is a such a thread linking architects, designers and artists of so many generations together - and all around a cart that symbolises a deadline. Thank you for posting about your father!

I love this post, Teresa! My husband is an architect - I know that the architecture dept at uni was a place of all-night working sessions & hugely intense pre-deadline schedules, but I must ask him when he comes home whether the term 'En Charrette' was in use when he was a student. I certainly know the experience as a writer, but find the technique (if you can call it that) hard to implement now that I have young children, who require their mother to be awake and competent (or whatever passes for it) at certain regular hours, whether she has just met a deadline or not...

I love this post too! And I am a big Zola fan so nice to see him mentioned.

Wonderful description of that incredibly intense time, Teresa, and all good wishes to the draft! I now know what to call the mood when forced to explain to others. Sometimes "I'm busy!" just doesn't have enough emphasis!

It's the first time I've come across en charrette, too. Being someone who seems to live by crisis management, I should definitely add this to my vocab book...Though I'm not as bad as a writer friend I know who tells the story (this was about 10 years ago) whose publisher sent a courier to pick up her manuscript which was horribly late. She kept him waiting outside while she finished the last few sentences. Thanks - a really interesting and enjoyable post.

Many thanks to all for your comments!

I'm definitely adopting 'en charette'. Sounds far more intriguing than 'I'm working like crazy to finish'! Love Zola too - those donkeys and horses in the coal mines I will never forget.

I have never heard this phrase before but, like others,will adopt it from now on! Thanks Teresa.