What else can I write about on my first First of May? Beltane (spelt in a rich variety of ways) is one of the four great Celtic Festivals, the other three being: Lughnasadh (1st August), Samhain (31st October), and Imbolc (1st February). They are all "cross-quarter days" falling between equinoxes and solstices and each has its own special significance.

This is may-blossom, in other words, hawthorn and this is a particularly fine pink specimen. Since Beltane is linking to dancing and fertility rituals, the heavenly scent and blush-tinged appearance of the blossom contribute to the theme. (Incidentally "cast ne'er a clout till May be out" means "don't shed any clothes till the hawthorn is in bloom" not, as a schoolfriend of mine thought, "don't hit anyone till the beginning of June." I think this year that the real advice of the saying is good, at least in the UK).

It is no coincidence that Arthur's  queen, Guinevere, was out "a-Maying" when she was ambushed and kidnapped by an amorous knight. Tennyson might have been on to something when he made that Mordred in his Idylls of the King but Sir Thomas Malory says, in his sublime Morte d'Arthur, that it was Sir Meliagaunce.

A beautiful queen gathering may-blossom with her retinue of ten women is captured by a knight who has long lusted after her but been afraid to come near her, not because of her lawful husband but because of her champion Sir Lancelot. Now, Guinevere has knights in her train but not Lancelot. 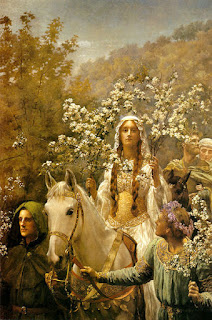 Still, Guinevere gets a message to her champion, he fights Meliagaunce but is betrayed into falling through a trapdoor into a dungeon; he escapes by wrenched the iron bars out of the window and bloodying his hands. He comes to Guinvere's chamber where next day blood is discovered on her sheets and her honour impugned (Meliagaunce, the jealous and frustrated beast, accuses her publicly of having slept with one of her wounded knights).

Lancelot of course eventually kills  Meliagaunce for such unknightly behaviour and his lack of courtesy is recorded on his tomb.

Are we a long way from Beltane fires and fertility rituals? I think not. All these festivals are times when the gates to the Other World are easier to penetrate and the story of the flower-picking queen and her abduction is very close to the myth of Hades and Persephone. Guinevere is imprisoned and released, not by her mother but interestingly not by her husband either. She doesn't have to stay half the year with Meliagaunce but she must have eaten something during her confinement in his castle.

Anyway, she is released and the flowers can bloom again; all is right with the world.

What Guinevere or the ancient Celts would have made of Morris dancers and Maypoles would be interesting to know. 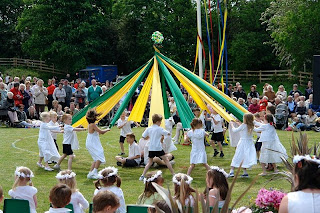 I live near Bampton, a village rich in Mayday traditions, with many "sides" as Stephen Fry told me on QI we are supposed to call them, of Morris Men. There is intense rivalry between them and on May 1st much beer is consumed from the many local pubs. The dancing becomes less and less inhibited as the day goes by but that's the only link with fertility I know of (though what goes on behind closed doors is another matter).

The Folies Bergères opened in Paris on a May 1st, which seems appropriate (1869).

Saint Walpurga was canonised on this date and because of her associations as a "grain mother" the Eve of her celebration has become paganised as "Walpurgisnacht" in Teutonic countries. I wonder what this Christian saint would make of her festivities becoming a Witches' Sabbath?
(I've actually sung Die Erste Walpugisnacht, a cantata by Felix Mendelsohnn) 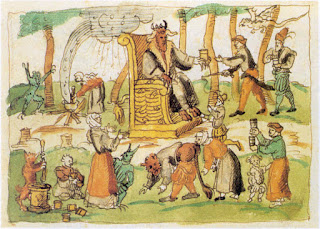 I wish I'd known that 'May' in the old rhyme referred to may blossom and not to the month. When I was little, we wore fawn coloured long socks in winter and short white socks in summer, and we were always longing to get into the white ones and the new summer sandals - but Mum stuck rigorously to the not-casting-a-clout till the end of May rule!

Thank you, Mary. This has added good stuff to the bad stuff I know about Beltane, which comes from being kept awake all last night (and on previous Walpurgis Nights, which mark the start of Beltane) because I live n the side of Calton Hill in Edinburgh, where much drumming and banging takes place until midnight, to drum the bad spirits away and make way for the loveliness of May Day. This, coming at the end of one of the worst migraines I've ever had, was not good timing and I added a few bad spirits of my own!

Lovely post. All I know about May Day is the Oxford version with singing from the tower etc. Most interesting, all this.

And a very wet May norning it is, alas, not a bit like the medieval poem:

It befell on Whitsontide
Early in a May mornyng,
The sun up fair can shine,
And the birds merry can sing.

'This is a merry morning,' quoth Little John,
'By Him that died on tree,
A merrier man than I am one
Lives not in Christandie.

'Pluck up thy heart, my dear master,'
Little John can say,
'And think it is a full fayre time
In a morning of May.'

A really interesting post Mary. I love how you just have to scratch the surface of our folklore to find so much underneath. I did a lot of research in this area while writing The Treachery of Beautiful Things. Which was originally called May Queen.

That was fascinating. Thank you :-)

Happy Beltane, Mary! That maypole brings back happy memories of when I used to be a Morris dancer and get up at dawn to dance on the nearest hilltop.

I even have an explanation for the blood discovered on Guinevere's sheets when she was kidnapped... that's when she had her secret daughter, the baby Merlin stole away to Avalon and gave to me!