I've just been sold on eBay.  I went for £99.55 (if you include the postage) which is an enormous relief.  I was scared that no one would bid.  It turns out that I'm worth 2% of Tracey Emin and 22% of Tim Minchin. Astounding.

I was part of an auction of self-portraits organised by the charity Children & the Arts. They sent us all a canvas and some paints and told us to get on with it.  The brief was to do a picture that summed what you did for a living, and that's how I found myself inside my laptop, with the keys spelling out my name. 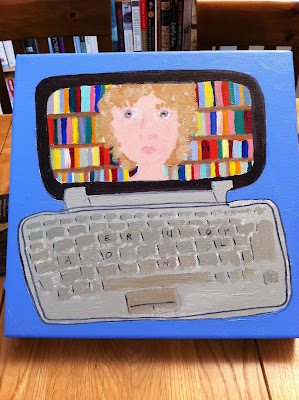 I can't imagine why anyone would want the picture, and can only thank whichever relative or friend saved me from adding the shame of being unwanted to the embarrassment of painting the picture in the first place. At least some money has gone to a good cause.  And the episode has given me a topic for this month's post, because I want to send you all to see the largest collection of self-portraits I’ve ever come across, which is hidden away in the Vasari Corridor in Florence. 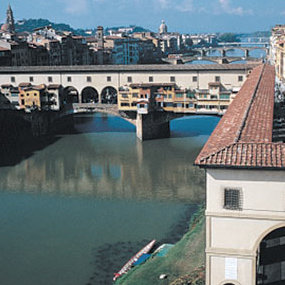 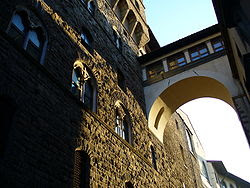 Should any of you have read my book Montmorency and the Assassins, you'll know about the Vasari Corridor.  It's a passageway running  from the Uffizi, across the Ponte Vecchio to the Pitti Palace. For more than half a mile it flows alongside, between, round and over all sorts of buildings; finally opening out at the bottom of the Boboli Gardens.  The corridor was built in the mid 16th century to give the Medici rulers a secure route from one side of the Arno to the other, with a stop along the way for a private booth from which the Grand Duke could observe services in the church of Santa Felicita. 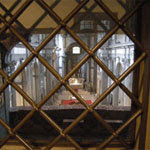 In my book, the corridor is the site of a frantic chase after a 19th century anarchist.  In real life, it's been severed by Nazi mines, and damaged by a mafia bomb in 1993.  Now, restored, it is full of pictures hardly anyone sees.  The corridor is open on only a few days a year, and you have to book a pricey guided tour to get in, but it’s worth it.  I went there to work out how it fitted in to my story, not knowing about the self-portrait collection it houses. This includes pictures of (and, obviously, by) Rembrandt, Velazquez, Van Dyck, Durer, Van Gogh Corot, Ingres, Delacroix, Andy Warhol and many more. 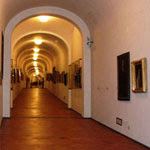 It's a funny thing, a self portrait.  Inherently vain  (even - perhaps especially - when intending to depict a humble, tortured soul) and sometimes unintentionally revealing, just as an autobiography or a castaway's choice of Desert Island Discs can be.  Do you go for warts and all, or spruce yourself up?  Do you paint an imaginary country estate in the background, or surround yourself with the trappings of learning?

What follows is, as Peter Snow would say, Just A Bit of Fun...

For more than a century, artists aiming for a likeness have been able to construct self portraits using photographs as references, but in the days before the camera they must have used mirrors. So I wonder whether, to find out what they really looked like, we should look at mirror-images of their work, because that double flip would show us their faces as they appeared to those around them.

Would it make any difference?  It might.  After all, There is no such thing as a symmetrical face.  If there were, some people we know well might look very different.

Here’s Charles II as we are used to seeing him: 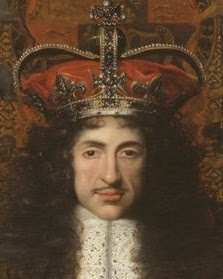 Although his face looks pretty symmetrical, if both sides were exactly the same, he would either look like this (two right sides) : 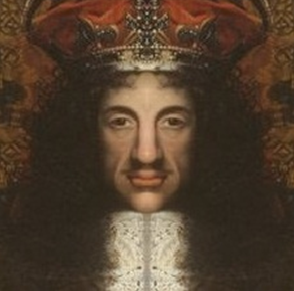 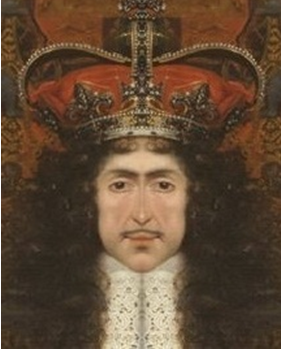 Or this (two left sides):

So when an artist paints a self portrait using a mirror, they may be presenting the face they recognise as their own, but it won't be exactly the same face those around them see.  Obviously, the difference won't be as marked as in the examples above, because the two different halves of the face will still be there, but I've chosen a couple of self portraits at random to see whether the artists look any different turned round.

Do we feel any differently about Rembrandt as he saw himself… 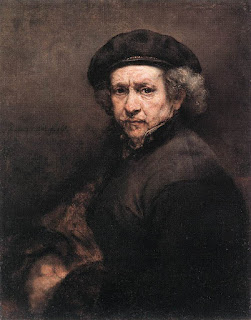 Or as others saw him? 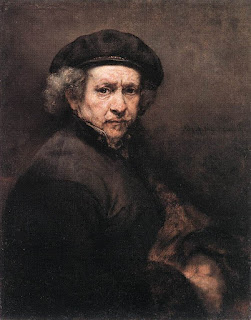 I fancy he looks older and sadder in the second picture.

How about Van Gogh? 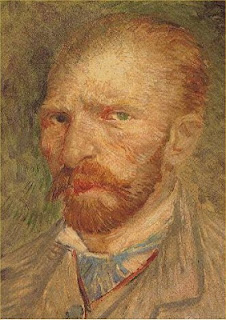 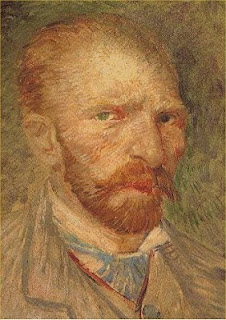 Here, I think that beady little eye at the back somehow has more prominence in the second image.  Could it be that I read faces left to right (like print) and give more importance to what I see first? So in the Rembrandt picture the wrinkles in the 'big' side of the face (the right side in the first picture) are balanced out by the smaller side, whereas in the second picture, they dominate - not just because that side is bigger, but because I see it first.

And what about the sitters in ‘normal’ portraits? Surely, until very recently their most frequent (sometimes their only) source of self-image must have been the mirror; so when they saw themselves in portraits painted by people looking directly at them, they might have got a surprise (I suppose the nearest thing we have these days is our shock on hearing a recording of our own voice for the first time).
Perhaps, if we want to see what the sitters thought they looked like (rather than what everyone else saw) we should flip over their portraits.

I can’t help thinking that Queen Anne might have had a higher opinion of her looks than those who saw her in the flesh or only knew her from this portrait. 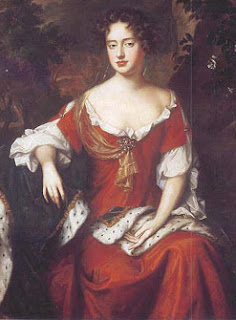 In the mirror, she looks prettier, and a little more cheerful, at least to my eye: 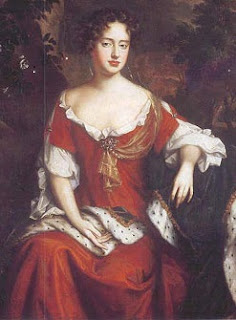 Maybe that's because I'm seeing her 'good' side first.
Or perhaps I'm fooling myself.

Anyway, it’s been fun to play.  Have a go with some of your favourite historical characters.  And remember, if you happen to be in Florence on one of the rare occasions when  the Vasari Corridor is open, book yourself a place on a tour.

Fascinating - that collection of self portraits sounds marvellous. It's always struck me as ironic - or something - that we never actually see ourselves as others see us. Perhaps that's why photographs are always such a nasty shock - or perhaps that's more to do with our astounding ability to kid ourselves!

I'm doubtless being dense, but how did you actually make the mirror images of the portraits?

I used the 'crop' 'and flip' features in 'Paint' , but I couldn't find a way of stickIng the two halves together there, so I did that in Word and then made jpegs from screenshots. There was a lot of cursing. I hate Windows7 and Word 2010 so much that I may take out a second mortgage and buy a Mac...

That is a hugely interesting and enjoyable blog, Eleanor. The thing that interested me about the views of Charles Stuart is that we are often told, nowadays, that symmetrical is most attractive. But I thought the symmetrical pictures didn't look half as attractive as his pictured, less symmetrical face. Of course, whether he REALLY looked like that is another matter - painters did flatter, after all, especially when painting a monarch.
I am going to Florence in September, so shall check out opening times for the Vasari corridor. I do hope it's open then.

ps. I think the reason photographs are a nasty shock is that they take us, often, halfway between expressions. If you freeze a video of highly attractive actors, they can still end up looking stupid and ugly. Also, the camera does lie, it flattens us out and makes us look fatter. Just look at pictures of someone else (preferably a slim person), and the point is made.

Nooooh! You've been in the Vasari corridor and I didn't know - have not read that book of yours.

I have longed to go for ages and wrote about an alternative version of it in Stravaganza: City of Flowers. I have seen the Santa Felicita grille from the other side. And the Grand Duke had all the butchers and fishmongers removed from Ponte Vecchio and replaced by the goldsmiths and silversmiths still there today so that the grand-ducal nostrils would not be assailed en route from the Uffizi (government offices) to the Pitti Palace.

But I've heard (beware, Leslie) that the Corridoio is going to be closed for restoration for several years.

There was a television programme about it a a year or so back presented by the ghastly Andrew Graham-Dixon so was of course more about him.

Fascinating - I think you're right, Eleanor, and we do read portraits left to right... so what about Chinese paintings, I wonder - should we begin at the bottom and scroll up?