On the 21st April 1947 (her real birth date) Princess Elizabeth delivered her  21st birthday speech from Cape Town and promised that her life ‘whether it be long or short’ would be devoted to her people and the Commonwealth. On the BBC recording she speaks in the measured, enunciated tones we know but every now and then ebullience bubbles through betraying her youth. Her birthday was celebrated with two balls – one at the City Hall and another at Government House in Cape Town. I imagine she was surrounded by stiff dignitaries and that already the duties of a future monarch were weighing in but she was glorious in this newspaper cutting below in her 21st dress – Norman Hartnell? 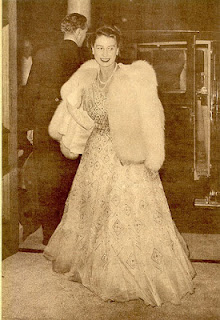 A few years ago a cousin of mine came across a scrapbook made by my father of the 1947 Royal Tour to South Africa. It’s nothing more than a child’s drawing book covered in brown paper with the unmistakable lettering of my father showing it as scrapbook: no 2. I wonder what happened to no 1 and was there perhaps a third or even a fourth scrapbook? 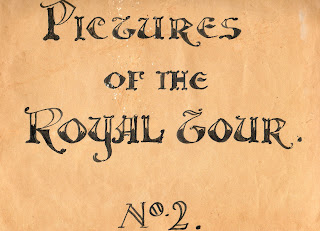 What’s very clear from the old, yellowed cuttings is that both the princesses and their parents though on official duty, were having a marvellous holiday. The princesses experienced their first aeroplane flights while in South Africa (they’d travelled to Cape Town on the HMS Vanguard). For safety Princess Margaret travelled with her father and Princess Elizabeth travelled separately with her mother. Cuttings below show the princesses galloping along beaches in the sunshine, (Peter Townsend, the King's Equery alongside but not seen in the photograph) visiting a snake park (Princess Elizabeth pointing) and watching hippos on the bank of a river (in rather formal safari attire) with Princess Elizabeth taking charge of her father’s camera. 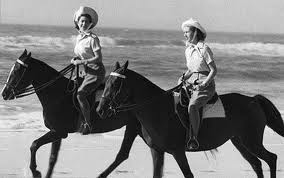 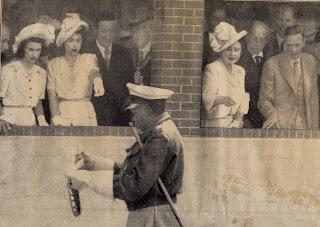 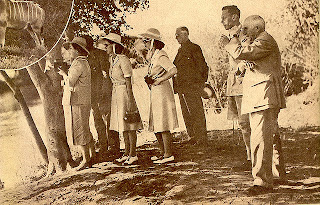 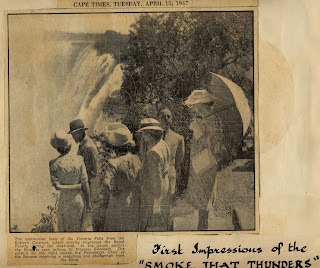 At the Victoria Falls (above) they stand at the edge of the precipice with no railings to prevent them from slipping over the vertiginous drop. Princess Elizabeth is right in front with her father and slightly to the left of her (unseen in this photograph but I know from my own experience) is a small wooden stave knocked into the ground that reads simply ‘Danger - keep away from the edge’


There are quite a few cuttings of the family with Field Marshall Jan Smuts, the then Prime Minister of South Africa. Smuts had been part of Churchill’s War Cabinet and wrote the preamble to the United Nations Charter and was on good terms with the King. We see them walking on Table Mountain together and in this photograph above, visiting the Drakensberg (Dragon Mountains) with Smuts attired in suit and tie and the King looking suitable casual in shorts. 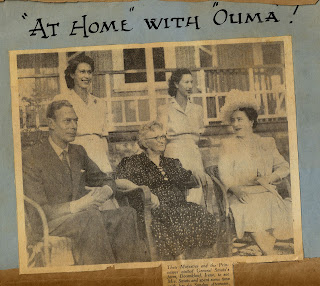 A photograph of the family having tea with Isie Smuts or Ouma (Grandma) as Mrs Smuts was known, is taken in the garden of the farmhouse, Doringkloof in Irene. The walls of the farmhouse were (and still are... as it's a museum today) made of corrugated tin and the floors of cement. I wonder what the princesses made of this?

I wasn’t there for the bunting, flag waving and Royal processions through the streets of Cape Town and the send-off in the Royal Train – eight luxurious, air-conditioned, ivory-painted coaches - that took the family through the Karoo up north to what was then Rhodesia. But alongside the Royal Train was a pilot train which carried journalists and reporters and I found this report:

In the cool of the evening, strolling along a strip of soil between the rail tracks where the Royal and pilot trains are pulled up, the Royal Family often emerge from the shadows of pines, blue gums, or wattles nearby. With the simplicity and charm that give a touch of graciousness to everything they do, the King and Queen will bow good evening as we stroll past each other. Princess Margaret, who is first to bed, rarely enjoys these brief, happy moments of relaxation, but Princess Elizabeth - a cardigan thrown casually over her shoulders - is a girlish, glamorous figure in the group.

Yes she was glamorous and in her sixty years as reigning monarch, the promise the Queen made in her 21st speech in 1947 still holds. My father's very simple scrapbook put together 65 years ago, gives a small glimpse and insight into the woman she would become. The days ahead will be a marvellous celebration. I might not be producing a scrapbook but I'm delighted to be here witnessing it.

How lovely that scrapbook no. 2 has survived! I just can't get over your father's beautiful lettering...

A very well-chosen post and a happily discovered scrapbook! Liked the fenceless Victoria Falls - and how glamorous and carefree she seems in the last picture. I'd like to see Scrapbook 3 as well as 1.

I wonder whether children still make scrapbooks about such "news topics"? Or are current scrapbooks full of sticky-backed "characters"?

Yes in a way the idea of a scrapbook is almost historic too. I don't think children make scrapbooks nowadays. But I remember as a child when I was ill in bed I was given a box of magazines and a pair of scissors and glue and an empty scrapbook and away I went creating a story from the pictures I found. Do we give children enough time to use their imagination? As I write quite intuitively rather than with a set plan, I found it hard the other day working with a 6 year old that she had to have an outline of the story she wanted to tell for her school homework. In a way for me that's like teaching a child to colour between the lines of a colouring in book. Totally counteractive to using their imagination. Scrapbooks were a way of 'storying' for me.

Hello Girls- I've just discovered your blog and I love it! I would love to work with you all in some way. I'm an illustrator that has a mild obsession with drawing crazy monarchs and historical figures. You can see my work here: http://www.facebook.com/LisaGravesDesign

Thanks! I have a lot of reading to do on your blog!

Thanks Dianne for piece on 1947 Royal Tour - which I have just discovered. As my father E W (Bill) Tacon was Commanding Officer of King's Flight (and Captain of the Kings plane) at that time, this tour is of special interest. If you know anyone who might have a picture of the Royals with their aircraft, please put me in touch johntacon@gmail.com (in Hanoi).

I have a collection of original photographs of the 1947 tour which can be viewed here: