My historical heroes are not great figures of politics, war or royalty. They are more humble than that. They are ordinary men and women who left literary works behind them. Books, plays or poems which have beguiled generations to come and influenced the course not of history but of literature.  And who is to say that in the long term this doesn't have as much impact as the lives of kings, queens or politicians? 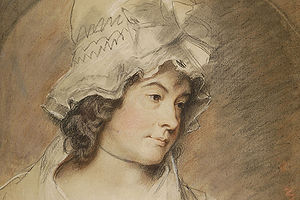 There are several authors I could have picked to write about today. I've already written a post about playwright Aphra Behn, so today's choice has fallen on Charlotte Smith. There are some surprising similarities between the two writers. Both were married women who had been about the world, both wrote to escape from debt and both blazed a trail for all those of us who follow them.

Charlotte Turner was born on 4 May 1749. She was born into a wealthy family and educated accordingly. But her father was a profligate and she was forced early into an unhappy marriage. Her husband Benjamin Smith was wasteful and cruel and the marriage was deeply unhappy. Smith stayed with him for many years, bore him numerous children and even began writing poetry, Elegiac Sonnets, to get him freed from a debtor's prison.

Benjamin's father, clearly recognising the faults of his son and their effect on his family, attempted to leave money to Charlotte and her children. Sadly the money became tied up in Chancery and never benefited her. It has been proposed that this is the case that inspired the fictional case of Jarndyce and Jarndyce in Dickens' Bleak House. 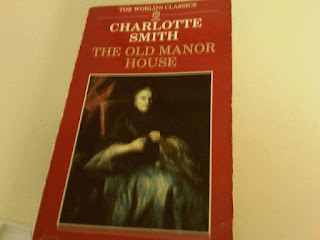 Smith wrote under her own name, which was unusual for a woman of her time, and continued writing to support herself and her children. But even after she left her wastrel, abusive husband, the law still allowed him access to the money she earned. She was an outspoken critic of the laws and politics of her time, speaking out in favour of the early ideals of the French Revolution. She earned money and fame with her novels but preferred writing romantic poetry as she believed it gave her more status. She wrote 12 novels in all: beginning with Emmeline. The Old Manor House is considered her finest. The Young Philosopher was her final novel, an outspoken criticism of England and its laws. I can't find any of them in print now, though the The Old Manor House certainly has been because I have a much-loved copy I bought in Bath Waterstones about 12 years ago. It's a love story about young Orlando and Monimia which is both spooky, engrossing and subversive. The novels are close to my heart as they helped form the Gothic

Charlotte Smith suffered severely with what she called the gout and is now believed to have been rheumatoid arthritis. She became incapacitated towards the end of her life. She eventually inherited money from her ex-husband but it was too late to benefit her. By the time she died, she could no longer hold a pen, her popularity had waned due to her political views and she was so poor she had had to sell all her books. She died in 1806.

I can't help wondering whether Charlotte Smith is the inspiration for that poverty-stricken and disabled 'Mrs Smith' in Jane Austen's Persuasion (1817). There are many similarities between the two women; their sufferings, their debt that could be solved by means of the law if only the right help were forthcoming, and their indomitable courage. There is no doubt that Jane Austen knew Charlotte Smith's writing even if she did not know her personally.


She had never considered herself as entitled to reward for not slighting an old friend like Mrs Smith, but here was a reward indeed springing from it! Mrs Smith had been able to tell her what no one else could have done. Thus speaks Anne Elliot in Persuasion. Likewise Jane Austen must have known how much she owed to the real Mrs Smith for her ground-breaking work, and it is likely that the tale of Smith's predicament touched her heart, as it must everyone's who hears of it.
Posted by Marie-Louise Jensen at 01:00

It's been pointed out to me on twitter that it was in fact usual for women to write under their own names at this time. I think this is probably true. Though I believe it was title and surname only as in Mrs Smith, Mrs Radcliffe, Mrs Edgeworth etc. Does anyone have more knowledge of this?

What a sad story, and what a brave and enterprising lady. Thanks, Marie-Louise.

Very interesting! I shall read her work.