Away from the Islands by Penny Dolan.

A short while ago, I read and enjoyed Katherine Langrish’s post about storytelling from the Blasket Islands at the “end of the world” or at least the end of the Dingle Peninsula in Co. Kerry, Ireland.

The post reminded me about “Hungry for Home”, a book I’d read in early summer, after I’d found it on the shelves of Sammy’s Shack on Inch Beach.

My book isn’t as romantic and satisfyingly old a volume as Katherine’s discovery, of which I feel most jealous, nor is it a totally wonderful book yet I did like the history that the writer, Cole Moreton slowly uncovers. In “Hungry for Home” (OUP 2008), he interweaves a story of the changes within a community, told as a “present” narrative, with the account of his own search, begun in 1998, to discover what happened to all the lost inhabitants. 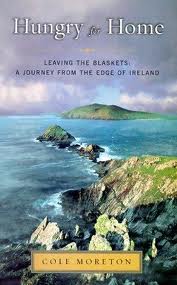 He shows a small group of people, changed by forces outside their control, which seems to me to be the kind of interesting knowledge that can feed deep into any writing of fiction, but he also shows a place both blessed and cursed by the gift of its voice.

“Hungry For Home” begins with the sudden illness of Seainin O’Cearna, one of the last young men on Great Blasket. It is Christmas Eve, 1946, and the weather is so wild and the sea so fierce that no doctor or priest can be reached from the mainland. When January comes, it is still as bad. The men can neither fetch a wooden coffin across Blasket Sound nor return the poor body across for a proper wake and burial - and if the weather stays so bad, they are all likely to starve.

This tragic incident was the one that led to the final wave of emigration that, by 1953, left the Blasket Islands deserted. The death was taken up by newspapers and became a cause.

By July 1947 opinion and questions raised in the Dail, had brought the wily De Valera, the Taoiseach or Prime Minister of Ireland, to the shore.  “Today he chose to dress like an islander, in a jacket of homespun wool cloth, black trousers and a round black fisherman’s cap.”

Clearly, our current politicians are not the only ones to milk a photo opportunity to the maximum.  Dev asks the islandmen how he can help, and suddenly the treasure of these bleak islands shows on the pages. Even the words of the men’s complaints have music in their telling:

“It is this way, your honour. The young men and woman of the island are after going to America and those that have not done so are already thinking about it. You see for yourself that there are not many souls left here. The years are upon us, the energies of youth are gone like the flowers in winter. We are too old to fish, we are too old to work in the fields and we are wondering what will become of us.”

Dev listens and then walks the potato fields with them, noting how poor the crop is that year. He praises their industry and leaves, promising to help them. Eventually, he sends two ministers, not with any practical help, according to this book - by now the islanders are losing faith with the man -  but to assess a particularly tangled problem. This was an area where “the language of the Gaels” was spoken: the truest Irish. These wind-blasted lumps of ground at the end of the world carried a deeper national significance than mere fields and rocks.  De Valera’s ministers reported that all the inhabitants should be moved across the Sound and housed in Drumquin on the mainland in order to preserve the language

How had the language of the area gained such publicity, such status? These voices were native voices; they were not English. They had become famous, Back in 1905, J. M.Synge had visited the Blaskets and become so entranced by the daughter of the King of the island that she was said to be the model for Pegeen Mike in his controversial drama “The Playboy of the Western World”, which then hit the Dublin stage.

The recognition that the oral tradition was alive in the Blaskets brought various students of Gaelic, all eager to find ways of recording their inheritance, among them the classical scholar and Marxist George Thomson. The islanders were, in their way, “uneducated.” The few teachers who came to the schoolhouse did not stay long. The community retained its own voices and ways of telling and that is what the many scholars wanted to preserve, especially at a time when a nation was wanting to reclaim its own language.

One autobiography, “The Islandman”, published in 1929, came about because Tomas O Criomhthain, a man from the Blaskets, was shown Gorky’s writing and encouraged to write down his own stories. In 1933 came “Twenty Years A Growing” by Muiris O Suilleabhain who had been brought to the isolated islands as a young child.

Even more influentially, the Blaskets were home to Peig Sayers, a remarkable old woman who was a great storyteller. Over a period of time, Peig told three hundred of the Gaelic stories she knew into an early recording device for the National Archive.
Unfortunately Peig’s stories – some funny, some savage, some earthy - were laundered to a new state by those who wanted to save them. The tales were dictated to her son and then edited by the wife of a Dublin school inspector. The Irish stories that eventually appeared in “Peig”, her 1936 autobiography, had been turned into homely and pious tales to make a set text that, according to Moreton, bored generations of Irish school children.

His book shows that many of the young Blasket islanders don’t stop at Drumquin, but away to America, with one sibling following another, using the money sent home. Morton traces families to Hungry Hill, a poor Irish ghetto in New York. There the immigrants survive by working hard in the roughest jobs, andby banding together to protect themselves and all their children against any dangers or intimidation. Within this tight social network, they prosper enough to gradually infiltrate positions of civic good and power. For a while, Moreton suggests, they actually recreated the intense self-reliance of the Blasket community. 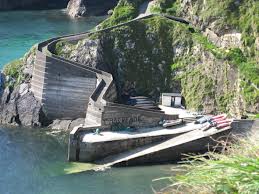 However, their immigrant story doesn’t end there. Gradually, they are able to feel comfortable. Their children take on American values and habits. With prosperity, some families move away, others follow and the children even further. It is the story of successful immigration the world over, with both the pride in doing do well and the sense of loss and separation from.

Just as the harbours of the Blaskets were once left behind, so is the old neighbourhood of Hungry Hill - and this time the island community has truly been dispersed.

As for the stories and the storytellers? Surely they’ve been spread to other voices and maybe to other pages?

What a lovely book, Penny! I'd not realised that Synge had visited the great Blasket too. I must read it. And I thought you might like this: it's part of a poem about Tomas O Criomhthain by Robin Flower, who knew him:

Below us the Great Island
Fell with white-shining grasses to the cliffs,
And there plunged suddenly
Down sheer rock-gullies to the muttering waves.
Far out in the bay the gannets
Stopped and turned over and shot arrowy down,
And, beyond island, bay, and gannets falling,
Ireland, a naked rock-wave, rose and fell.
He had lived on the Island sixty years
And those years and the Island lived in him,
Graved on his flesh, in his eye dwelling,
And moulding all his speech,
That speech witty and beautiful
And charged with the memory of so many dead.
Lighting his pipe he turned,
Looked at the bay, and bent to me and said,
"If you went all the coasts of Ireland round,
It would go hard to you to find
Anything else so beautiful anywhere;
And often I am lonely,
Looking at the Island and the gannets falling
And to hear the sea-tide lonely in the caves.
But sure 'tis an odd heart that is never lonely."

Completely fascinating and thought-provoking, Penny - thank you.
And thank you, Kath, for that breathtakingly beautiful poem.

'The heart is strong, the blood is Highland, and in dreams we behold the Hebrides...'

Good to see you both at Reading yesterday, even if only briefly!

Very interesting and informative post, Penny, and a lovely poem from Kath. I missed Kath's post, and must search it out.

We visited that south western corner of Ireland 15 or 20 years ago, on the way to visit my brother-in-law, who lives near Limerick. We stayed in B&Bs - everyone's first language was Gaelic - and after the evening meal in one, we all trooped into the small living room and sat in a circle while the farmer told us stories - he was a 'seanchai', pronounced 'shanachai' - an accomplished storyteller. I don't remember the individual stories clearly - one was about a famous Irish politician, while others were traditional, or sort of extended jokes - but I do remember the rhythm and power and confidence of his narration.

That storytelling session sounds quite an experience Sue - and I'm assuming you had a glass in yourhand tooo? Thank you for the beautiful poem about Tomas, Kath. I'd seen Robin Flowers name, and he's there on my "must find out about & read" list too.

There seems to be so much to explore in the writings and stories about the whole Blasket and Dingle area including the political resonance. Moreton also says that Charles Haughey had a house built on one of the islands but after the publicity seems to have rarely used it - suggest you make of that what you will.

But I also recall reading a Flann O'Brien (sp?) novella - "The Poor Mouth" I think? - that looks with humour at the whole poor-but-inspired heritage. It may be the one where the young narrator is amazed, when travelling to a new area of the country and see a "big lamp in the sky" as he's never seen one there before. "The big lamp" has become one of our family expressions.

Great to meet you all at the weekend as well.

(ps. Apologies to all HG for my large print. I wasn't trying to shout my post - had just forgotten to change font size while moving from word into blogger.)

Thank you, Penny and Kath. Lovely to know the origin of Pegeen Mike's irrepressible verbals!

Michelle Lovric. writing as anonymous because ... well, you know, the usual problems.

Oh, Penny, your wonderful post sent me to my bookshelves where I found "Twenty Years A-Growing" It's a just a little book but such memories it has for me as it belonged to my father. Lovely Introductory Note by E. M Forster too. Now I'll have to read the whole book again - it's as though someone is sitting beside you telling the stories. Thanks again Penny